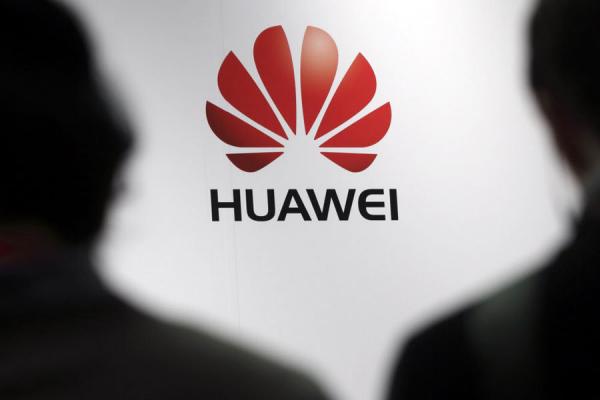 Large amounts of storage in phones is becoming a necessity, especially with the enhancement of cameras that are aimed at having the capability to record 4K video. And with every three minutes of 4K footage taking up almost an entire GB, you would only wish to record a full day of 4K video with Huawei’s upcoming phone having onboard an amazing 512GB storage.

This Huawei smartphone in question, with the model number NEO-AL00 is listed on tenaa.com. TENAA has been a source of many rumors as smartphones seek to receive certification, but there is never a guarantee of these rumors coming to pass (Though some definitely do).

It is, however, evident from the site that the device has 6GB of RAM and 512GB of onboard storage to offer, which deems it to become the first smartphone to skip over the usual mark. 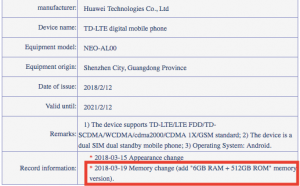 The listing revealing the NEO-AL00 to offer 6GB of RAM and 512GB of onboard storage.

Up to today, the maximum storage capacity offered on any smartphone is 256GB – with releases from Apple, Samsung, Asus, Xiaomi, and Huawei. In December 2017, Samsung announced to begin the mass production of the world’s first 512GB embedded Universal Flash Storage (eUFS), as a solution for use in next-generation mobile devices. This leaves us with only expectations of them introducing it with their own smartphones.

Related Article: SanDisk has released a 400gb microSD card and it costs more than some smartphones

Huawei, on the other hand, does not seem to have an in-house mobile storage production facility despite offering enterprise-level data storage solutions, but could be working on a concept device under the Mate series to be called Huawei Mate X. Just last month, the company also trademarked the MateX in Europe under the smartphone category.

For your information, Huawei is preparing to launch the 2018 flagship smartphones on March 27th in Paris, France. The company will be unveiling the Huawei P20 and P20 Pro smartphones on that day, with the Huawei P20 Pro coming with a triple-lens camera on the rear featuring 40MP RGB sensor, 20MP Monochrome sensor, and 8MP Telephoto sensor. There will also be a Porsche Design Huawei P20 limited edition smartphone.