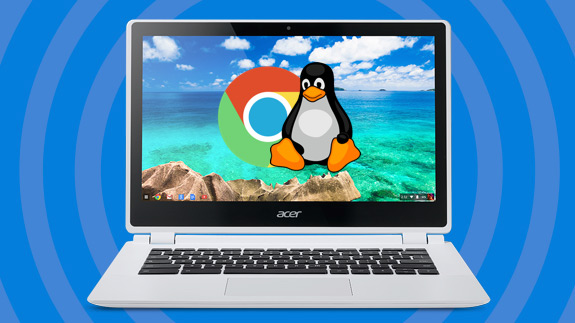 It is official, Google is adding support for Linux apps to Chromebooks. For a long time, Chromebooks have been perceived as glorified web browsers. All this is changing as Google seemingly has plans for where it wants Chromebooks and Chrome OS to go. A while back, Chromebooks got the ability to run Android Apps, effectively opening them up to a world of new possibilities.

This feature will work by running Linux apps within custom Linux virtual machine that “starts in seconds and integrates completely with Chromebook features“. Users can expect a seamless, integrated and user-friendly way of making this work. The deep integration into the Chrome OS means users can pin Linux apps to the Chrome OS shelf for quick launching, arrange, snap and manage Linux app windows as normal, and access files in Google Drive and local storage from inside apps.

While confirming the long-rumored news in a blog post during its annual developer conference Google says the move will ‘equip developers’ with the tools they need for their ‘next coding project’.

It is still unclear how Chromebook users will get access to these Linux Apps. As it is, Linux users have “App Stores” and repositories that are unique to the various Linux distributions. Maybe Google will curate their own version of Linux App Store, maybe they will add a section on their Web Store for Linux apps. If so, could the same store be accessible to Linux desktops out here? We don’t know.

A Chromebook is now a web browser that runs Linux apps, Web Apps, Android Apps. Oh, and it is rather affordable. Some early testers have even been able to load Steam games on the Pixelbook. This is becoming a very viable alternative to Windows. While we might not see the legion of Windows users ditch the platform for Chrome OS, it is good to know that they are improving. And who knows, maybe the next development will be adding compatibility with Windows programs!…probably not.

One thought on “Chromebooks will soon run Linux Apps”