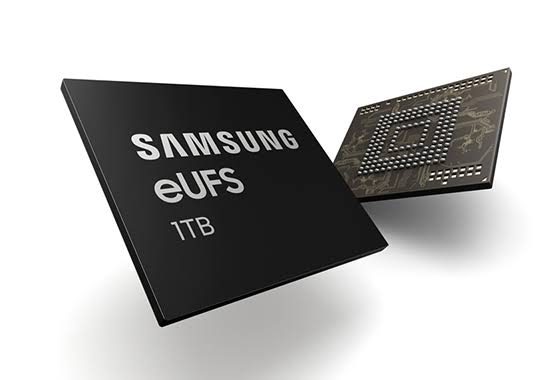 Recently, Samsung announced that they have commenced the mass manufacturing of 1TB embedded universal flash storage (eUFS) cards. Few years into the manufacturing of eUFS cards, Samsung have been able to increase the range of storage options offered by their cards. Although not all smartphones support this storage option, high-end smartphones these days users the 64GB eUFS or 512GB eUFS at best. Now, you don’t only have more storage space but also faster. Most premium smartphones don’t come with support for external storage and with this you wouldn’t have any need to grieve over that because you’ll be having more than enough at your disposal.

There is an ever rising need for more storage bandwidth accompanied by faster data transfer. In the advent of 4K videos, VR, 3D graphics and so on there is an undeniable need to have better options at our grasp. Using the new 1TB eUFS, you can now store more 2160p resolution videos, up to 260 of them which is way more than what premium Micro SD card can offer. You can not only store more files, but you can also easily transfer them with the eUFS card able to offer 1000 megabyte-per-second read speed. This makes it 10 times the speed of your typical SD card and twice that of a normal 2.5-inch SATA SSD.

Read More: What smartphones have a whopping 1 Terabyte of storage

No longer do you have to transfer files from your phone to your PC for safe keeping. Using this new development, smartphones will be on par with some top of the line laptops out there. Running apps from the new 1TB eUFS 2.1 is now interestingly faster because of the improved random function. You can now capture top speed slow-mo 960fps videos continuously with the faster speed provided. Random read speed comes in at 58, 000 IOPS which is significantly better than the best on ground, in fact, 36% faster. The random write speed here on the eUFS is 50, 000 IOPS and that of your high-end memory card is just 100 IOPS. That’s 500 times the speed of the latter!

Coming in at the same size with its predecessor, the improvements made is mouth watering. Not only that, it is available for use by other smartphone brands since the mass production has begun. So be prepared to see more of this storage option and most likely in the upcoming Samsung Galaxy S10 series.