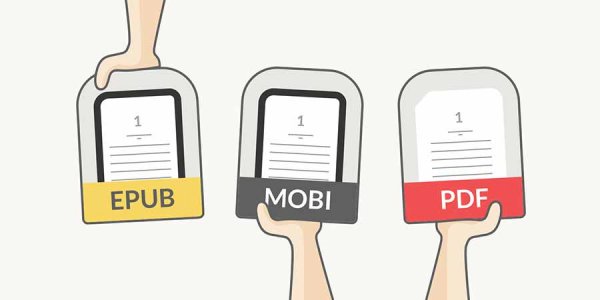 There a bunch of ebook formats available today and they in their features, extent of support on e-readers and popularity. Some of the formats we will be discussing are proprietary, which means they can only be gotten from the source who made them. Another point to consider is the Digital RIght Management (DRIM) integration on these formats which varies from being well secured to weak. Here are some of the formats we will be addressing:

Check Out: Top 5 Apps for reading eBooks on Android devices

Fully known as Portable Document Format (PDF), the format is by far the most popular and widely supported by almost all e-readers and devices out there. It is open standard so you can get it easily, however, it is not reflowable which means it does not automatically scale to the size of your device. Also, this file is less interactive like dictionary, Quiz, live video streaming, and others. However, this is not the best option if you want to sell your content, as it does not really implement DRIM. and is not the best idea if you want to avoid piracy.

The title of the most sold ebook would go to EPUB because it is largely supported by most e-readers and it is open standard with no proprietary ties to any vendor. It is the second most popular ebook format and can be opened by almost any e-reader or ebook reading device. You can also easily add to your EPUB content although it can be removed too. It is widely available and supports images, graphics, alongside other multimedia. It can even be encrypted with variations such as the EPUB2 and EPUB3 available. The latter is the latest and support interactive content, unlike the rest which is its predecessors.

Developed by Mobipocket, it was more or less coined from Open Ebook format (OEB) but not an open standard format so you can not get it from anywhere besides Amazon. Mobipocket was acquired by Amazon which is also the parent company of Kindle and later dissolved it. This way, the format can be read on all Kindle devices and app as well as a bunch of other e-readers or devices. Unlike EPUB, the format is not so interactive but multimedia is supported excluding sound and videos.

Read More: Top 10 List of Chromebooks you should consider in 2019

Moving to Amazon’s proprietary ebook format which was launched alongside the Kindle platform in 2007. The format which is believed to be a derivative of the Mobi format from Mobipocket that Amazon acquired years before then, The format has various interactive features and is also the format you’ll get when you get an ebook from Amazon. Due to its proprietary status, it is not quite as supported as the aforementioned ones. There is restriction on this format which is quite secure and combined with better encryption.

The last on the list is IBA, created by Apple as the format in which ebooks are made using the iBooks Author app. The proprietary format is not widely readable like the rest and even so, it comes only Apple devices. Even ebooks from iTunes are in EPUB format which shares some similarities with IBA. There is also support for restriction on the ebook format and active interaction too.