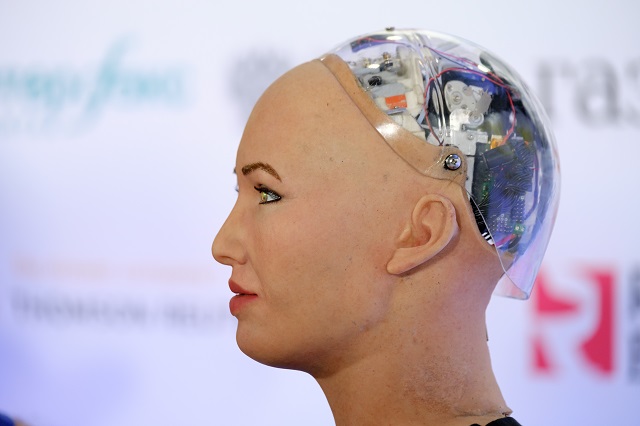 The Africa Blockchain Conference 2019, slated for the 3rd and 4th will have a very special guest in attendance. The world-famous humanoid robot, Sophia, will grace the two-day Conference and Tech Expo that will take place at the Kampala Serena Hotel alongside other notable personalities like the President of Uganda and Sierra Leone President, HE Julius Maasa Bio.

Sophia uses artificial intelligence, facial recognition and visual data processing to function. It was developed by Hanson Robotics and introduced to the world in February 2016. Sophia can display more than 50 facial expressions and was the first non-human to be given any United Nations title (United Nations Development Programme’s first-ever Innovation Champion for Asia and the Pacific) is also the first robot to receive citizenship of any country.

This year’s conference will be focused on what the 4th Industrial Revolution (4IR) is, what opportunities it presents, what threats it poses and what Africa must do to leverage 4IR for its development. The Africa Blockchain Conference 2019 is organized by CryptoSavannah and the Blockchain Association of Uganda with the support of the Ministry of ICT and National Guidance.

As part of the conference, there will be an “Africa 4.0 Tech Expo,” an experiential journey showcasing the leading technology innovations and applications in Africa.

The Conference and Tech Expo are expected to host 3,000 people, comprising the public and private sector, experts and leaders from global technology companies, entrepreneurs, innovators, students, youth and government representatives. Topics to be discussed include Africa’s readiness for the 4th Industrial Revolution, Fintech, payment systems, and digital financial services, the future of work and education, SDGs and technology for impact.

Commenting on Sophia’s participation in this year’s Africa Blockchain Conference, Kwame Rugunda, the Chairman of the Blockchain Association of Uganda, said;

“We are pleased to be hosting Sophia at this year’s Conference. She highlights many of the topics of interest that will be discussed at the Conference and shows how technology is enriching humanity. It’s human-like appearance and ability to express emotions will be a major attraction for all those that will be in attendance. Sophia also featured at this year’s Transform Africa Summit that happened in Kigali, Rwanda.”

Some of the companies to confirm participation in the upcoming expo include;