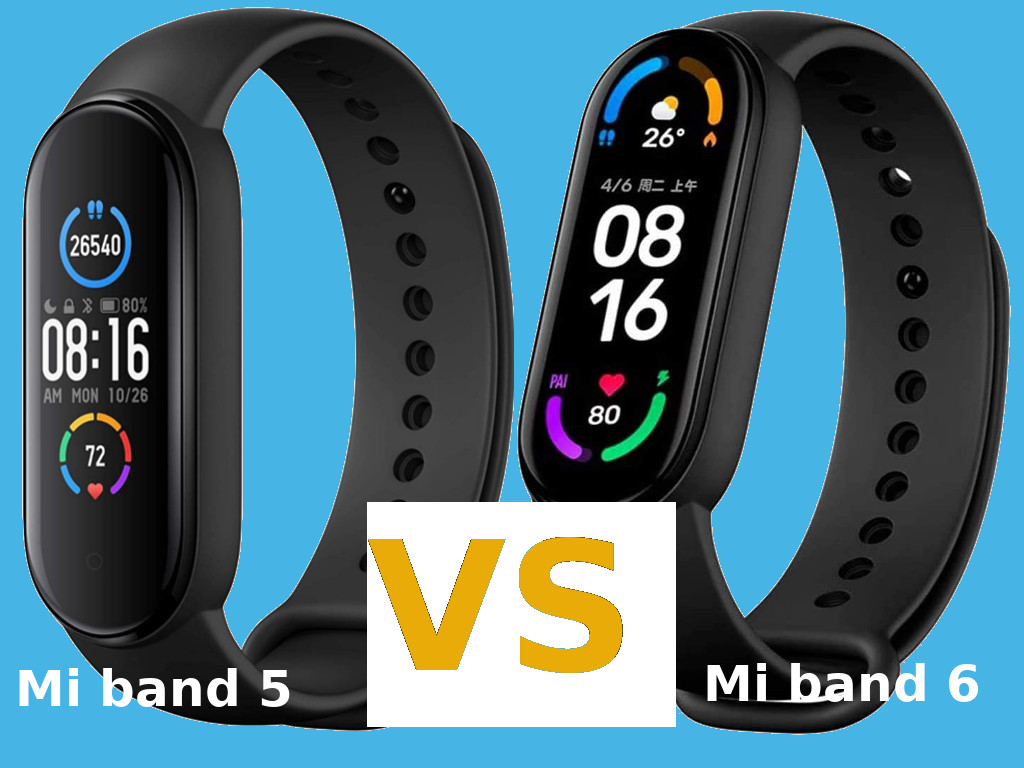 The Mi band is one of the most popular and affordable fitness trackers you can buy today. It’s made by Xiaomi, a Chinese company with a reputation of producing premium-looking products on a budget. The Mi band 6 is the latest iteration of Xiaomi’s popular fitness tracker succeeding last year’s Mi band 5. As you would expect, the Mi band 6 has some incremental updates to its predecessor that you might want to consider before you upgrade.

What’s new with the Mi band 6?

We have extensively written about the new features on the Mi band 6 along with a review. But summarily, the Mi band 6 adds an SpO2 blood oxygen saturation monitor, a 50% bigger display, Workout history on the band and 30 fitness modes. The Mi band 6 goes for about $40-50 which is about $5-10 more than last year’s version.

To kick things off, we start with the most visible update to the Mi band 6 which is its display. Xiaomi has increased the Mi band 6 display by about 50%. The Band 6 now spots a 1.56” up from 1.1” of last year’s device. In terms of dimensions, the bands are more or less the same width, length and height. Xiaomi has just increased the screen to body ratio of the Mi band 6 pushing the display right to the edges. That gives the Mi band 6 that extra screen real estate.

You also get slightly improved screen resolution of 152 x 486 px with the Band 6 up from 126 x 294 pixels. Both are powered by a bright AMOLED display, so you generally won’t notice a big difference in terms of resolution.

The most obvious difference between this year’s Mi band 6 and last year’s band 5 is the inclusion of an SpO2 blood oxygen monitor. Almost every fitness band or smartwatch is including an SpO2 sensor in 2021. SpO2 is the percentage of the volume of Oxygenated Hemoglobin (HbO2) in the blood to the total Hemoglobin(Bh). It is an important physiological parameter of the respiratory cycle of the human body.

The popularity of this feature is partially attributed to the ongoing Covid-19 pandemic. Your SpO2 readings show the seriousness of Covid-19 infection since it’s a predominantly respiratory disease. The Mi band 6 can take SpO2 measurements right from your wrist arm. But it’s not as accurate as a standard hospital-grade pulse oximeter. This is why Xiaomi insists that the readings should be taken for reference purposes only.

Another feature you will see on the Mi band 6 you won’t find in the Mi band 5 is workout history. This is now included in the main menu of the band and it shows historical data of your last workout sessions. At first, I thought this was a minor update that should show up in the Mi band 5 with a firmware update. But the last time I updated my Mi band 5, it still wasn’t present.

I should mention that you can view your workout sessions from the Mi Fit App for both bands. It’s just that having it on the band gives you a quick glance at your performance right after a workout session. Not much of a big deal if you asked me.

I mostly use my band for tracking walking and running which work pretty well. I actually took both bands with me for my evening runs and they gave me more or less the same results.