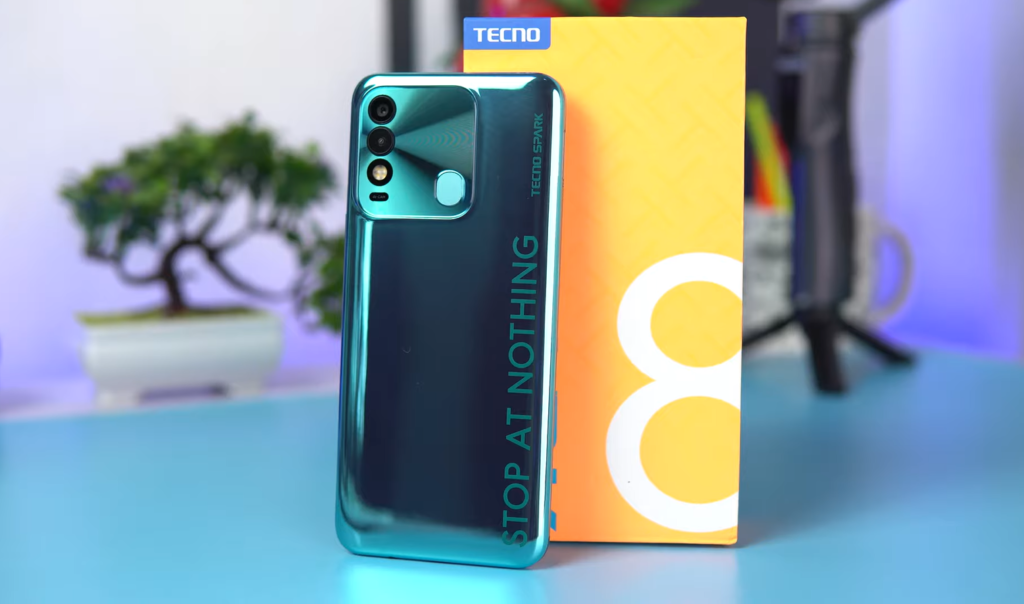 The Tecno Spark 8 is already on the shelves for sale in quick succession just about 4 months after its predecessor, the Tecno Spark 7 was released. Although not with any bells and whistles as expected, the smartphone comes with a redefined design and some new better specs. However, it still comes below what the Tecno Spark 7P offers and maybe we will see an 8P variant of the Tecno Spark 8.

Tecno prides itself as a budget smartphone maker through and through, in fact, it does not make any flagship smartphone at all. This makes their phones quite affordable and a big part of the smartphone market not only in Nigeria but also in Africa as a whole as well as other countries like the Philippines, Pakistan, India and Bangladesh. Even though the Tecno Spark 8 is on sale in only Nigeria at the moment, you can expect it to go on sale in other regions in due course.

What’s in the Tecno Spark 8 Box?

Inside the Tecno Spark 8 Box, you have the usuals like a transparent phone case, SIM ejector tool, 10W charging brick, micro-USB cable and even an earpiece is included in the box as well.

Moving on to the Tecno Spark 8 features and specs, here is a glance at what you’ll be getting on the smartphone. For the most part, the Tecno spark 8 is a low budget smartphone that offers the Android Go experience with a decent spec sheet as shown below.

Keeping in mind the budget category the Tecno Spark 8 is in, the smartphone strikes as an all-around well built device. There is the customary plastic build and waterdrop notch on the smartphone which is reminiscent of the 2018 smartphone trend but now constantly featured in budget phones. Speaking of trends, the Spark 8 also joins in the big camera module trend only in this case only a small part is actually occupied by the camera.

Also, the Tecno Spark 8 uncharacteristically has the fingerprint sensor on the unnecessarily large camera module which matches the colour of the rest of the back panel. There is a glossy finish at the back with the new “Stop at nothing” brand slogan written somewhat too boldly at the side which I find somewhat unnecessary.

As regards display, it is fairly large at 6.5-inch and with a mere HD+ resolution which is part of the deal for a cheap smartphone. As mentioned earlier, there is a regular-sized waterdrop notch to house the front camera. In addition, the borders at the sides of the display have fairly obvious bezels with a small chunk at the bottom as well. There is no information on what type of glass is used but hopefully, we will know more about that later. This is the same display setup on the Tecno Spark 7 by the way, so not much has changed in that aspect.

Since there is no change in the camera section from what you have on the Spark 7, you can expect much of the same features and performance here. Going by that, the smartphone would deliver good photos in optimum lighting conditions but not quite as good in low light. In this budget category, this is one of the best camera setup you can get on a device at this price point.

Moreso, down from the triple cameras on the Spark 7, the Tecno Spark 8 has a dual camera with a 16MP main sensor with a QVGA AI camera assisting and an 8MP front camera in the notch. Another thing we will miss is the two selfie flashlights upfront present on the predecessor.

In the battery aspect, there is a downgrade from the 6, 000mAh on the Spark 7 but on par with what is on the Spark 7P. That being said, the 5, 000mAh on the Tecno Spark 7 is ample enough to get you through the day easily. Instead of a USB-C port, you’ve got a Micro USB port here instead that supports only up to 10W charging. In other words, the Tecno Spark 8 does not have fast charging and certainly not wireless charging either.

Much of the specs here have remained the same from the previously launched Spark 7 but things are different here. You have a more powerful Helio P22 processor compared to the Helio A25 of the Spark 7. However, unlike the predecessor with a 3GB RAM variant, there is only a 2GB RAM model for the Tecno Spark 8 for now and it comes with 64GB storage space.

Also since there is no 3GB RAM model on the Spark 8, it doesn’t have a normal Android OS. Instead, you have the Android 11 Go Edition OS installed on the smartphone.

The Spark 8 is already on sale at the moment and the price tag on it is 55, 000 Naira which is the equivalent of about $106. If you want a cheaper smartphone, you can check out the Tecno Spark Go.

Update: Tecno Spark 8 has been released in India and the price is slated for Rs 7,999.