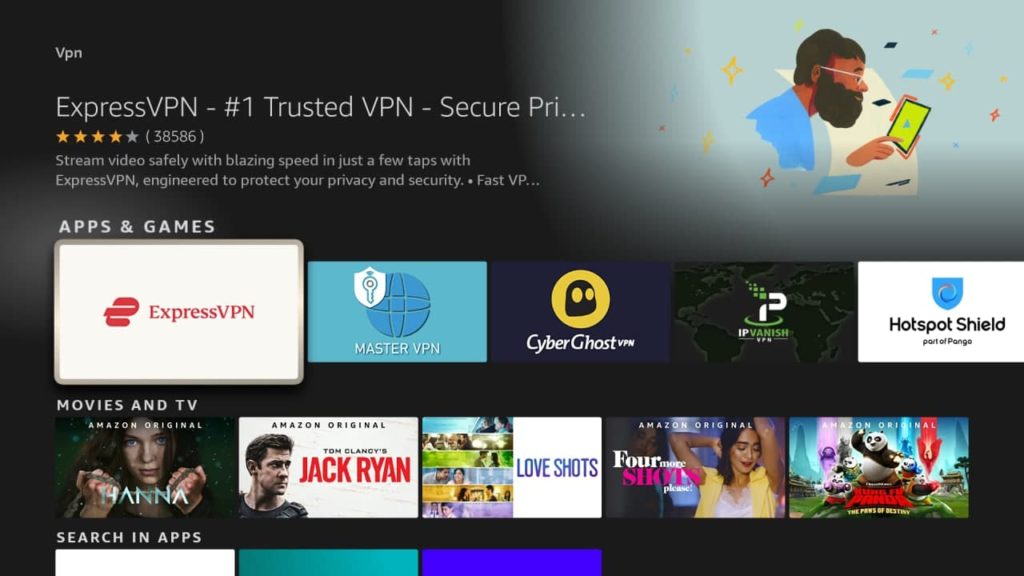 Fire TV is a versatile Smart TV platform that enables you to stream content online and browse the web on the most affordable devices. Fire TV Sticks are HDMI plugin streaming players that can instantly turn any TV into a smart one for as low as $30. Even if you own a Smart TV, you might want to get a Fire TV Stick to access apps or streaming services that aren’t natively available on your Smart TV’s app store.

Now using VPN or Virtual Private Network has become increasingly popular. VPNs offer the best security and privacy online. They prevent your Internet Service Provider(ISP), Government or hacker from snooping on your browsing activity. When used with a Smart TV or Fire TV Stick, VPNs can help you access streaming services that aren’t supported in your region. They by-pass geo-restrictions or blocks by hiding your true IP address from the streaming provider.

A Quick Word on Free VPNs

VPNs are both paid and Free. I highly discourage you from using Free VPNs. They are usually very slow, don’t guarantee protection and are usually Ad-supported making their interfaces very sluggish. If you hope to use a Free VPN for streaming, it’ll most certainly not satisfy your needs. They are more likely to be detected by streaming providers too. Their bandwidth and speed caps alone won’t get you past your first movie or series episode. For instance HotSpot Shield free plans limit you to just 500MB/day and 2Mbps speeds. If you want to use a VPN for free, then choose a premium VPN with a 7-day or whatever period free trial.

Choosing a VPN for streaming

Since we are looking at VPNs for the Fire TV, then your requirements are clearly going to be different than those of ordinary Joe browsing Facebook or Twitter. In addition to other standard features, Speed is the name of the game here. Nobody can stand watching their favorite movies or series while their internet is buffering.

If you’re streaming a Full HD 1080p movie, 5Mbps internet speeds are recommended. If it’s a 4K HDR movie such as those from Netflix, Disney+, HBO Max, then at least 10Mbps is recommended. Faster is better. Now, every VPN no matter the provider is going to slash on your internet speeds by a certain percentage. That’s because of the overhead encryption data that a VPN has to carry. The standard is about half like my Windscribe VPN. However, faster VPNs such as Express VPN will minimize this to as low as 5%. For instance, from my own tests with Expressvpn, I was able to achieve 18Mbps download speeds with Express VPN turned on for a 20Mbps internet package from my ISP. That’s quite impressive. Look out for VPNs that support Wireguard protocol as it’s apparently the fastest VPN standard.

Besides Speed, you want to consider server locations. This is dependent on the streaming service you are trying to access. If you want to access U.S Netflix, then clearly, your VPN provider should have a considerable number of servers in the United States. If you wish to access BBC iPlayer, then your VPN provider should have locations in the U.K. As mentioned, VPNs hide your true IP address by routing your traffic in different countries, fooling your streaming provider that you’re a resident of that country. However, streaming providers have recently upped their game discovering and blocking VPN users. The most notorious is Netflix. So using a VPN is no guarantee to work anymore.

Unlike some Smart TV platforms or streaming players such as Roku, Apple TV or Samsung’s Tizen, you can install VPN apps directly from the Fire TV Amazon App store. This is one of Fire TV’s super powers. So all the VPN providers on this list are available on the Fire TV’s App store and be directly downloaded and installed the same way you do with any other App.

To Install your VPN of choice, go Find on the main menu, then select Search. You can either type in the VPN name or say it using Alexa with remote Mic Button. You will be directed to the App page where you can download and install it. It’s pretty easy.

In Summary, the best paid VPN providers are ExpressVPN, Surfshark, NordVPN, ProtonVPN, IPVanish and CyberGhost. But if you are looking for those that have some kind of Free plan, then consider ProtonVPN, HotSpot Shield.

Alright, in no particular order, here are the top 10 VPNs on the Fire TV platform.

If you’re in the market for a VPN to watch Netflix, then ExpressVPN is downright one of the most popular choices out there.ExpressVPN is one of the fastest VPNs for streaming today. It’s fast, easy to use, supports multiple clients such as Smart TVs, Mac/Windows/Linux, Android/iOS, Fire TV, specific routers and much more. ExpressVPN runs over 3,000 remote servers in 160 locations and 94 countries. They recently released their own custom VPN protocol called Lightway which apparently is optimized for speed. However, it’s also the most expensive on the list. ExpressVPN’s best deal goes for $8.32 a month billed over 12 months. However, they offer a 7-days free trial for FireStick users.

This is another great option for streaming Netflix. It’s known to be capable of breaking through VPN blocks and is widely supported across a number of platforms. NordVPN has its own VPN protocol called NordLynx based on Wireguard which is fast. They have over 5,500 servers worldwide and offer upto 6 devices on a single account. It’s affordable if you pay for longer periods; $3.32 billed over 2 years ($89 on signup for two years of service).

Surfshark another great commercial VPN service provider for streaming available on Android TV. It’s a good option to obtain geo-blocked content thanks to 3200+ servers in over 65 countries. Its speeds are good, but not so great and the price is quite cheap too. It’s quite reliable and has good positive reviews overall. Surf shark’s best deal starts at just $2.49/month plan billed over 2 years making it one of the cheapest providers on the list.

IPVanish VPN is the most popular VPN used by Fire TV Stick users.. They own 2,000 servers spread across 75 countries. This is quite smaller than the other providers on this list. But that’s not to say it’s less powerful. The company owns 80% of its server hardware, has tight security and privacy policies such as full disk encryption, zero traffic logs. Your connection is protected with various VPN protocols including WireGuard, OpenVPN, IKEv2, L2TP, and IPSec. Subscriptions go for $10.99/month billed monthly and $3.75/month billed yearly($44.99). They don’t offer any free trial, however they do offer a 30-day money-back guarantee on their annual plans if you cancel within 30 days.

Private Internet Access(PIA) VPN offers robust connectivity with upto 10 simultaneous connection and numerous server locations of upto 78 countries. They have excellent speed test scores. PIA VPN offers no usage logs which is great for your privacy, unlimited bandwidth which is good for streaming and Ad blocking features. They support 5 devices simultaneously. They support both OpenVPN, IKEv2 and Wireguard VPN protocols. Pricing starts at $9.95 per month or $3.33/month ($39.5 per year) billed annually.

My favorite and the one I personally use is Windscribe. That’s because they have a generous free plan that offers upto 10GB/month free and additional 5GB if you tweet for them. It’s also widely supported across multiple platforms. I use it on Netgear DD-WRT router, Chromecast with Google TV and on Fire TV stick. Getting around Geo-restrictions is a hit or miss situation according to my experience, but it works most of the time.Windscriber offers a monthly data allowance of 10 GB for its free plan. The paid plan costs $4.08/month billed $49 every 12 months. But if you want only U.S servers, you can pay $2/month with their custom pricing plan.

With servers located in Switzerland, ProtonVPN is high up on security. Their reputation goes before them. But since we are talking about VPNs for streaming, ProtonVPN has a “streaming plan”. This plan promises VPN blocking bypass for popular streaming services like Netflix. ProtonVPN offers a free plan that supports only one VPN connection and unlimited bandwidth which is cool. It starts at $8/month billing $96 yearly. ProtonVPN has absolutely well designed Apps across multiple platforms with intuitive interfaces according to my experience.

CyberGhost VPN is another excellent VPN for your Fire TV Stick. They have over 7,000 servers across 91 countries world wide most of which are located within the U.S and U.K. So if you Live in the U.S or Latin America and wish to watch BBC iPlayer, then you can easily connect to the U.K servers. They offer OpenVPN, IKEv2 and Wireguard VPN protocols which are known to be secure. A single subscription gives you protection for upto 7 devices simultaneously. So you can share your account with family and friends. Subscription goes for $12.99/month when billed every month which is hefty and $3.15/month billed $75.6 every two years.

The unique feature about Hotspot Shield VPN is that it offers a free subscription tier. However, it might be helpful if you wish to use it for streaming. With just 500MB of bandwidth daily, 2Mbps speeds and a restriction to only U.S based servers, you might use up your quota in just one movie or series episode. However, the paid-for plans offer upto 5 simultaneous connections with no data limit. You get access to over 80+ country locations including China, Russia, Turkey and Vietnam. Paid plans are billed $12.99/month monthly and $7.99/month yearly which is quite more than most providers on this list.

Hide.me offers a free VPN service that offers 10GB/month with 1 simultaneous connection, 5 worldwide location and no logs policy. If you use up your 10 GB data, you can continue to use the free plan as an unlimited data transfer plan, however, you won’t be able to choose a server location. This will be randomly selected for you. Paid plans go for $9.95/month or $6.66/month billed annually.