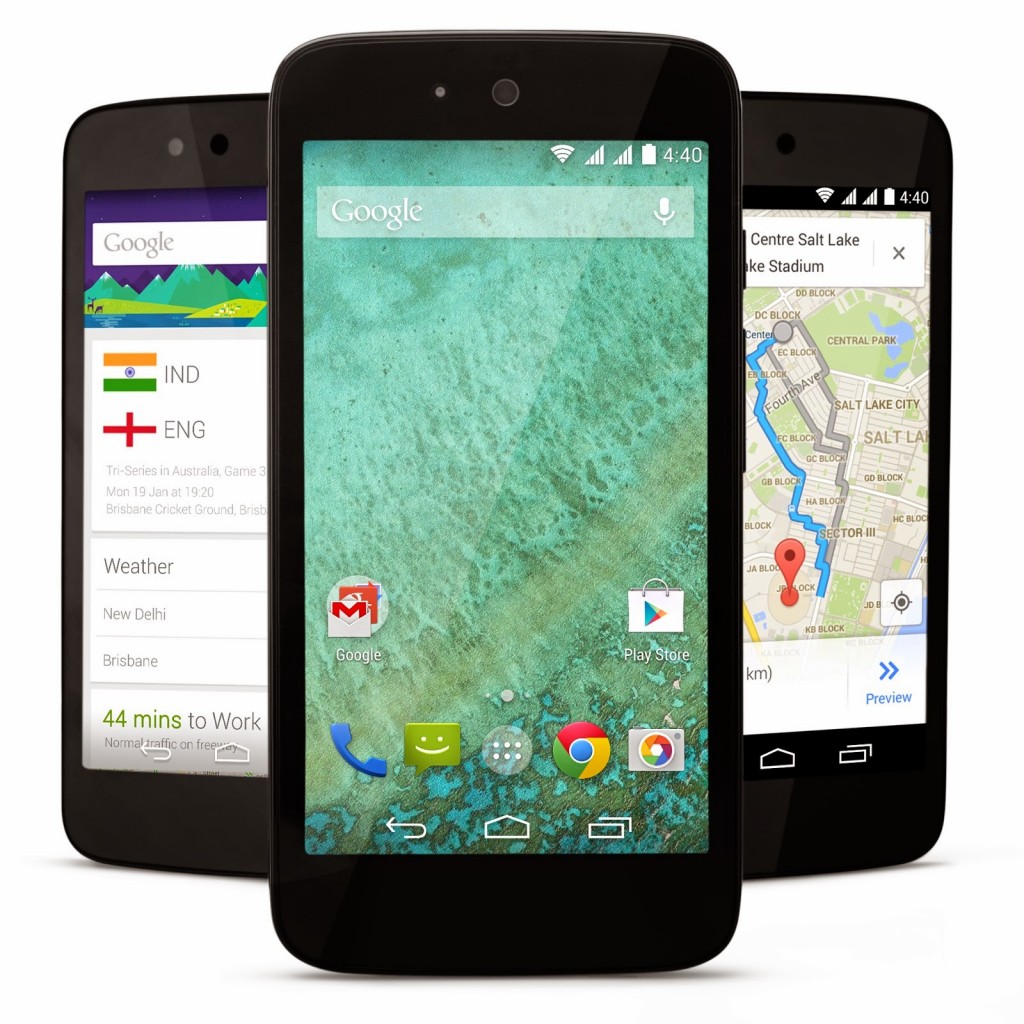 Google has today announced the first assortment of Android one devices in India. The announcement follows Google I/O 2014 event in June this year where it introduced the Android One program as an initiative to make high-quality smartphones accessible to as many people as possible. The first phones are being made by Google’s hardware partners Micromax, Karbonn, Spice and chipmaker MediaTek and are available from leading retailers in India starting at Rs 6,399 ($100).

The common denominator is that Google has designed devices with the needs of emerging markets in mind specifically at least an all-day-long 1,700mAh battery, a slightly bigger display of  4.5-inch, 854×480 resolution IPS display, dual SIM support, an FM radio, 1GB RAM, 4GB storage space with microSD Card for Multimedia storage, front/rear cameras of 2MP and 5MP respectively for taking photos and capable MediaTek MT6582 SoC with 1.3GHz quad-core processors for better performance. The only differences will be in the design and minor software enhancements.

Why is Android One important to Google

Google is less interested in putting devices in more hands in emerging markets than it is to provide more information to these people as it states on its official blog;

“Access for access’s sake is not enough. With Android One, we not only want to help people get online, we want to make sure that when they get there, they can tap into the wealth of information and knowledge the web holds for everyone.”

The consequence of connecting more people to online services is more eyeballs that the search engine can directly use to catapult its Ad-driven business and appease more advertisers.

Is the Android One coming to Africa?

Google has not said much about Africa, although the company made it clear that the device is targeted more towards the emerging markets of which Africa is part. The company’s attempts to change the mobile landscape in the continent started in 2010 where it worked closely with Chinese Telecom vendor Huawei to bring the sub $100 low-end Huawei Google Ideo  smartphone to East Africa. The device has since sold more than 500,000 units in the region increasing on smartphone penetration in the region by big multitudes.

The company has said on their official blog that it will expand the Android One program to Indonesia, the Philippines and South Asia (Bangladesh, Nepal, Pakistan, and Sri Lanka) by the end of the year, with more countries to follow in 2015. The company has also partnered with Airtel one of India’s most popular networks and certainly one of biggest in Africa.

Therefore it is very likely that Google will bring the Android One range of devices to Africa probably by next year 2015. Although there are already device vendors changing the mobile landscape on the continent such as Tecno, Infinix, Samsung, SoloPhone, the Android one will simply amplify the effect increasing on mobile and Internet penetration in what some have termed as a “mobile first” continent.

You can read more about the Android One phones on the official page, but you can tell us whether or not this is a device will actually buy in the comments.