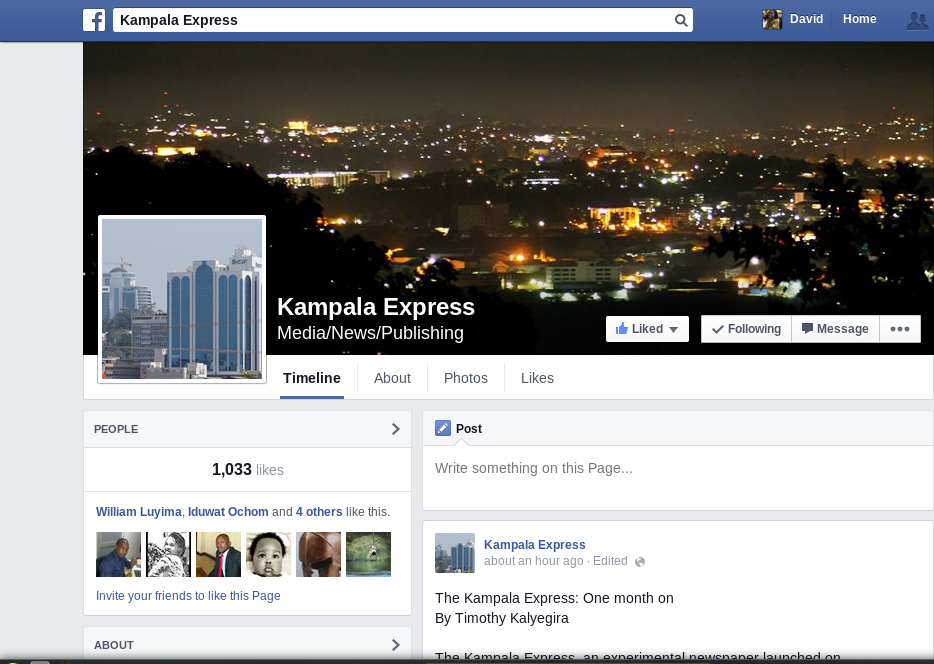 “The Kampala Express seeks as its principal goal to undo the damage done by social media to quality journalism and quality photography”. That is the principal goal behind a new no-nonsense Facebook-based online newspaper started around late this year by veteran journalist, researcher and political commentator Timothy Kalyegira.

With over half a million Ugandans on the mega social network daily crunching the pages of their social graphs to be abreast by what their friends are upto, it’s not difficult to understand why Timothy chose Facebook as medium of his new newspaper. Facebook in and of itself is a “newspaper” as Zuck put it.

Through the Facebook Newsfeed, users get the latest newstream about their social connections but also relevant content from mainstream media sources whose pages they have liked. Unlike mainstream newspapers who predominantly run offline newspapers and only graft-in digital channels as a secondary option, Timothy’s Kampala Express is purely digital. More accurately, it runs entirely on Facebook.

Facebook already provides Timothy a wide audience almost by default and a rich multimedia publishing platform without having him spend lots of money on his own content management system. That’s why the journalist is using quality photojournalism to bring out the best in Ugandans, their surroundings and their expressions;

“In an era where the Internet is awash with poor quality photos, instantly taken without much attention given to technique, the Kampala Express seeks to advance beautiful, thoughtful photography of the professional, non-smartphone kind, to evoke the best of the country, its geography and its people and places”

Besides quality photography, the journalist is providing analytical reporting on current affairs, something that is highly lacking in most of our media today. Timothy’s concise and in-depth reporting on ex-prime minister’s sacking last month garnered his social newspaper immense attention and praise. By providing minute-by-minute updates as the news unfolded mixed with historical context around the story, Timothy showed mature journalism neatly interwoven with the capabilities that new digital publishing platforms offer.

The Kampala Express also plays along with traditional media specifically radio stations. The paper curates popular radio talk shows from prominent stations such as KFM, Sanyu, Radio One, Power FM and transcribes the conversations for his Facebook audience that could have missed or doesn’t listen to radio anymore.

However, the journalist seems to be very critical (ironically) of the very platform that he’s using to run his publication. Timothy decries of the “careless writing” and “colloquial expressions” that are the norm in how Facebook users express themselves. That’s why the paper is on a mission on restore more serious writing starting with its own publication on Facebook;

“ In this era of informal writing, casual social media uploads, comments, most of them laced with slang, the Kampala Express seeks to restore the original beauty of the formal written word, with formal writing, formal punctuation and, as far as is possible, the avoidance of slang and colloquial expressions.”

Although there’s truth in Timothy’s observations, the fact that the average Facebook user in Uganda can barely construct a well thought-out and written English sentence which again is a reflection of our educational institutions, he also seems uninformed of the social networks and the internet culture.

These new social networks and technologies develop within themselves accepted forms of communication and self-expression properly understood by their users. Remember SMS for instance? SMS had its own fork of English that its users had created to suit or circumvent the limitations that the technology had imposed on its users. Twitter is another platform that has got its users develop a unique language particularly unique to the platform such “DM”, “GM”, “CYDM”, “GN”, hashtags and a new set of vocabulary like “tweet”, “tweeps”, “retweet”. The use of emoticons, phrases such as “LOL” on platforms such as Whatsapp and Facebook further “dilute” mainstream English and upset the likes of Timothy.

However, it’s undeniably true that some or if not most users blatantly refuse to write proper English on social media or even serious forms of communication like Email. They are under the impression that social media is not a place for writing “proper English” as one fan of the page noted; “ I don’t think writing (and speaking) proper English is that important – especially on Social media.”.

Timothy’s Facebook-only Newspaper joins a league of sprouting digital-only newspapers such as Chimpreports that are beginning to grace and redefine the media landscape in Uganda. These follow traditional journalistic standards with purely run on digital platforms for production and distribution of media. However, a new form of unconventional media catalyzed by our highly networked society and ubiquitous editing software is beginning to catch fire. This new form of media can’t be more evident than the abrupt sacking of ex-prime minister, Amama Mbabazi, in which political memes rocked the social media waves bypassing and maybe even surpassing conventional media channels in reporting the story.

Here’s a short Wikipedia except about him.

Became a controversial figure during the late 1990s for his reviews of Ugandan radio stations. Freelance correspondent for United Press International (1999-2000) and Janes Defence Weekly (1999-2000).

Starting 2007, he initiated a controversial public debate when he questioned the widely-held belief that up to 500,000 Ugandans were massacred by the government of Idi Amin and was subsequently accused by many of seeking to absolve Amin of the atrocities attributed to him.

He has variously also suggested that the 1994 Rwandan genocide was masterminded by the Rwandan Patriotic Front (RPF) guerrillas, against the mainstream world opinion that the genocide was planned and executed by the government of President Juvenal Habyarimana.

Founded, July 2009, an online newspaper, the Uganda Record. Arrested, Aug. 2010, for publishing in the Uganda Record a series of articles appearing to suggest that the twin bomb blasts in Kampala, Uganda on the night of 12 July 2010 were not masterminded by the Somali militant group Al-Shabab, as widely believed, but by the Uganda government or security elements in it.”

The Paper currently has ( 16,695 likes. Like The Kampala Express page here.