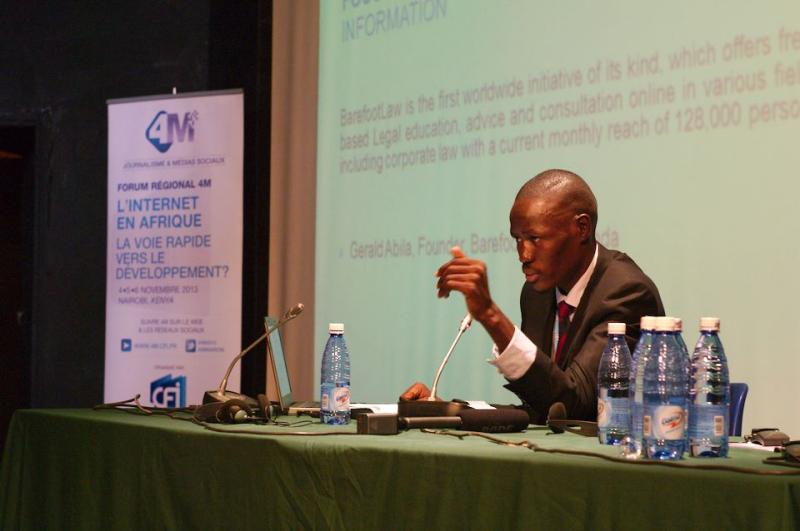 When I first met Gerald Abila over a cup of coffee two years back, I was more than convinced that this young man full of vitality and vision was about to change the law fraternity. Like all small beginnings, what he was working on at the time — BarefootLaw Uganda — didn’t show any signs of meteoric growth that is the norm of his venture today.

Gerald mused about how disruptive technologies particularly the internet would change professions, businesses and individuals. How the new open hyper-connected world and a set of network technologies such as social networks would liberate information that was previously shackled under the heavy chains of legacy institutions and structures. That sort of foresight and disruptive thinking, fueled with unrelenting passion is what drove Gerald to crunch and contextualize the law for the ordinary user.

Today,  his social enterprise BarefootLaw, is a multiple award-winning Social enterprise dedicated towards the smart synthesis of Information Technology and the Law in order to improve access to justice and legal services in Uganda for the under-served communities. Contrary to excuses such as capital that you would expect from thousands of people that could have or should be doing something similar, the organisation is self-funded and relies on the generosity of the team members who each contribute 10%  of their personal earnings towards running the organization.

“We are a self-funded initiative and rely on individual contributions and generosity by the team (10% tithe of everyone’s monthly earning are dedicated towards running this organization).”

Such humble beginnings are not unique. We have previously written about the story of Addmaya, a highly successful film and design firm run by Peter Mukiibi and Arthur Nakkaka that like BarefootLaw, was started by sheer passion amidst shoe-string budgets. This of course is rightfully diversionary from the Silicon Valley model currently propagating through the continent in which raising huge amounts of capital from venture capitalists is now glorified as the express highway to success. 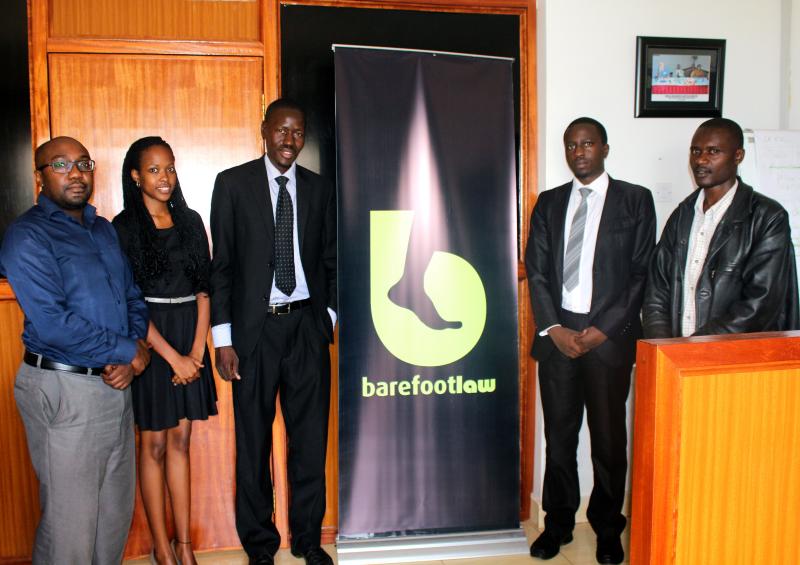 Gerald and his team is using existing information distribution channels to provide access to free legal services with remarkable success. We first wrote about the venture last year when they introduced a video conferencing solution dubbed “BAREFOOTLAW V-COUNSEL” which would enable it combat the challenging problem of lack of adequate access to legal services across the country. The organisation’s use of simple text-driven platforms such as Facebook and the use of more sophisticated video conferencing tech is part of the startup’s innovation DNA that’s giving it a competitive edge against other legal service providers;

“We have pioneered the smart synthesis of Information Technology as a backbone for access to free Legal Service, education and Justice, Law and Order Sectors and has since become the largest and most active online legal social media portal in Uganda with a monthly reach of over 150,000 individuals.”

Gerald is using Facebook predominantly which can be accessed for free by over half a million users on the giant social network thanks to several Telecom promotions such as MTN Uganda’s Facebook Zero.

I caught up with him over a Facebook chat to get his insightful views on disruption and the future of Law.

Geeks in the courtroom

How did a geek end up in the courtroom

I have some experience both in I.T and the law and as I studied law. I realized that many of the challenges faced could actually be overcome with smartly fusing law and IT (Information Technology).

I always say, the future of  law is not only in the law itself, but in IT as well. The internet and IT are tools of the new age of enlightenment and once enlightenment starts, then it goes on and on.

What sort of response have you got from your users

The response is very good actually, we do receive now on average 60-80 legal issues a day on our online platforms.

In total, our monthly reach is on average 170,000 which is an increase of 20,000 since the award from the American Bar Association and the media coverage that came with it. If you look at our ratings on Facebook, we have about 4.5 stars out of 5 , which is not a bad thing I must say.

The future of Law and the role of disruptive innovation

How do you take seemingly boring information (the law) and turn it into piece of content that many ordinary users want to consume and relate to?

At BarefootLaw, we believe the law should not only apply, but be relevant and easily understandable, so we take complex legal topics, and strip them of the complexity, and reduce them to every day vocabulary, which is easily understandable. We also relate the law to everyday occurrences and get people interested. For example, during the Oscar Pistorius trial, we related that trial to the offence of murder and manslaughter in Uganda, and to a prominent ongoing case based on the same principles, which really generated much debate and discussion on our various forums.

It is also important to note the media that we use to drive this “information”; we present this “stripped down” content across different platforms that the public relate to everyday and every time. That is why technology and indeed social media are critical drivers for this content.

Is there a possibility that we shall see other professionals borrow a leaf and turn their knowledge into a weapon of public good given the ubiquitous publishing tools and connectedness we have today?

Yes. That should be the way. The future of everything is in IT. IT is the new factor of production and is very low cost that the computing power at ones fingertips could accomplish tasks that could take lots of people to complete. For example, we’ve developed a Law Firm software which can enable a lawyer to have the power of over 50 lawyers at his or her disposal.

We sacrifice a lot to offer free legal services. In turn, we challenge our clients to pay it forward. What have you given to your community? If you are a taxi driver, why not go on a Sunday to the nearest medical unit and offer free transport for a sick person to hospital or back home? If you are a doctor, why not offer your services free of charge to your community for at least a certain number of hours? All this can be easily achieved by one adopting technology.

Previously, lawyers hid themselves behind the high fences of the knowledge of the law that was inaccessible or not understood by the ordinary people. Doesn’t this paradigm introduced by barefoot lawyers “keep the lawyer a way” now that information is readily available?

Much as BarefootLaw is a disruption, we are also generating awareness of the existence of these laws and the need for legal services. We are helping people understand their laws and know when they have a cause of action, or a case and when they don’t. This eventually will lead to a reduction in the case backlog faced by the current Justice, Law and Order sector. So now, where people thought of dealing with issues by themselves, they prefer to get a lawyer because BarefootLaw told them to find a lawyer to handle the matter.

This kind of impulse is important for societies trying to develop and prosper. When the law gets more and more available, it becomes more entrenched: that means more people doing trade the right way, more tax compliance, more opportunities for the law to be correctly applied for justice to prevail. This is what every lawyer and all well-meaning citizens support. We also hope this approach will reduce on incidences of mob justice in society.

What can you tell us about your near-term plans

We are in the process of upgrading our infrastructure, including the website. We also launched our beta version of the BarefootLaw App, and are currently getting reviews to be included in the final version. We have partnered with Bribespot which uses technology to report corruption incidents around the world.

We are also looking at ways of providing legal information to micro, small and medium enterprises (MSME’s) because from our 2 years of interaction, we have come to realize that many of them collapse because of lack of legal information and knowledge which affects their business decisions.

We are in the process of expanding in form of partnerships, and are actively looking for partners in order to increase our threshold and reach. We have also launched BarefootLaw tube, where we make educational videos about the law freely available for anyone to access on YouTube. We are also improving our infrastructure for the Virtual Counsel service, in terms of hardware upgrades to increase on our capability. Be on the look out for our new interactive website coming out next week. 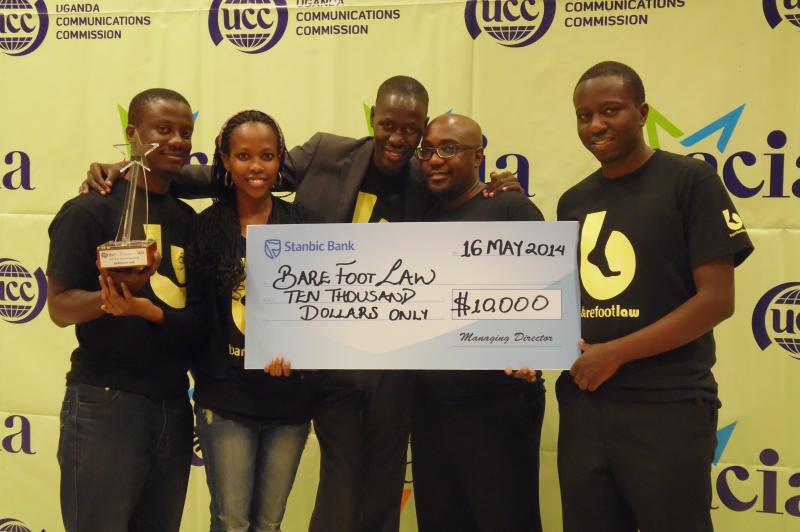 Barefootlaw recognized at ACIA Awards under the ICT for Development Category

BarefootLaw has taken home several awards. Among the awards won so far are the Lady Justice Award, Social Justice Award, Uganda Communications Commission- ACIA Awards under the ICT for Development Category, overall winners of the Judge’s Choice Awards at the Uganda Communications Commission- ACIA Awards. BarefootLaw was also among the only three organizations recognized by World Wide Web Foundation, headed by Sir Timm Bernes, who invented the internet, during celebrations to mark 25 years of the internet as bringing a “Positive development” to the internet.

One thought on “The Future of Law: A chat with Gerald Abila, the founder of award winning Social Enterprise BarefootLaw”