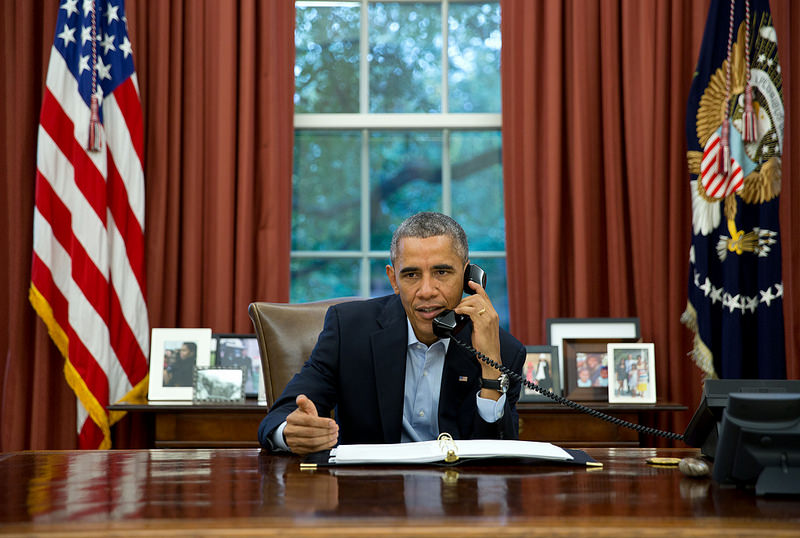 Dear President Barack Obama, you have no excuse this time. The planet is well aligned. The winds are blowing right. Well, for once, ignore Putin’s recent bizzare skirmish. Generally everything seems up and tight. Now, pick up that phone and dial +1-650-XXX-XXX. It looks like it’s going to be a really long conversation.

Remember that time last year when Mark Zuckerberg called you expressing frustration over NSA’s continued backdoor surveillance on Facebook’s servers? You furrowed your brow, hit the cedar wood White House table with such angst as if baying for Snowden’s blood. Those must have been some heavily punctuated verbal jabs you received from the young social media mogul, weren’t they? Now is the time for that sweet little revenge.

Mr. President, Zuck is on a mad roll with this whole thing of treating the internet as a utility. Zuck is building a ginormous project dubbed internet.org that is aimed at connecting the remaining two-thirds of the world that don’t have internet access. It just commenced in Africa, so far launched in 3 countries—Zambia, Tanzania and Kenya—and the prospects are to further the initiative wider. The internet.org app comes bundled with a plethora of international and localized services too and is such a great conduit for accessing information on the internet. I [heart] it. Africans love it. The numbers are confounding and indeed they don’t lie; over 30% of Africa’s internet traffic is routed through Facebook and for many of us, the social networking giant is summarily the internet.

Whereas both of you seem to agree on reclassifying the internet as a utility, just like water and electricity, you seem to be in for a big surprise.

Mr. President, your address about net neutrality has been heralded as the harbinger towards having a fully democratic internet, finally. The loose four-point suggestion to FCC was well-thought and articulated. In simpler speak, you recommended that (in verbatim):

I am afraid though. It appears Zuck wasn’t copied in the memo. Or net neutrality is just a U.S affair, not Africa or even Asia. You also said that you wanted to see an internet that would sire democratic change in governments especially through freedom of speech.

In Uganda for example, Tom Voltaire Okwalinga (TVO)  is using the Facebook platform to raise awareness about the ruling government’s illicit ways. Honestly, I can’t tell if the information is dogma or not but word on the streets has it that the government has miserably failed to net whoever is behind that account. It’s even alleged that Facebook rejected a request placed by the government to unveil TVO’s mask. TVO seems to be going harder by the day. Just like TVO’s musings, radiokatwe.com, an anonymously owned website, was on a mission of exposing the rot in government coffers. However, its fate was determined when UCC decimated its access addresses under the infamous line – orders from above. That wasn’t only denial of basic right of expression but also denial of access to information to the public.

The government used UCC as its walking stick to thwart any politically driven agenda especially that hosted on the internet.

This is why I agree with the premise (reclassifying the internet as a utility) and hence letting users choose what content they see or not but greatly disagree with the argument (connecting the unconnected without being biased). Let me explain.

What happens when I attempt to do some more research with the help of a search engine of choice, say Google? Your guess is as good as mine, the Google Search omnibox was kicked out of the internet.org app without second thought. In fact for one to Google stuff, they would incur an extra cost on the Mobile operator’s network. The pain or rather frustration this causes to a first time user is tantamount. They have no choice but to stay tucked into the philanthropic supported internet.org. Mr. President, this isn’t net neutrality by any measure, it is outright monopoly. It’s outright capitalism. And soon the competitors will be re-inventing the 21st century scramble and partition of mother Africa.

Unless the connections are unconditional, I am dead sure they aren’t, then it’s not net neutrality. It’s war! An impending digital war.

I still use Facebook (sorry American kids, I’m not that cool), Amazon, Twitter, Google among several others and what happens when Facebook colludes with ISPs and mobile network operators (philanthropic, it could be) all over Africa and Asia to reach the next 4 billion who don’t have internet access? It reminds me of the golden colonial rule, “my way or the highway!” By leaps and bounds, Facebook would trounce its competitors—which is most likely the case—and assert itself even wider in geographical scope.

The unwavering resolve to conquer the internets especially in the emerging markets is getting tighter. Google, through Project Loon wants to connect those without internet access, Microsoft too, through TV White Spaces wants to leverage redundant T.V signals as a medium of sending internet signals to the unconnected.

It’s prescient enough that these tech giants are building many more structures upon which their prospects will be furthered. They will partner with local mobile carriers and segregative services and pricings will occur, of course, borne of competition. And this connotes that net neutrality is anything but a concept Africa will keep talking about.

I know, I could have said alot or even used some misplaced examples but this kind of double standard has to stop. We love Facebook as much as we love other sites. All we need is unbiased access.

“What’s on your mind?” Mr. President. *sent via Facebook messenger