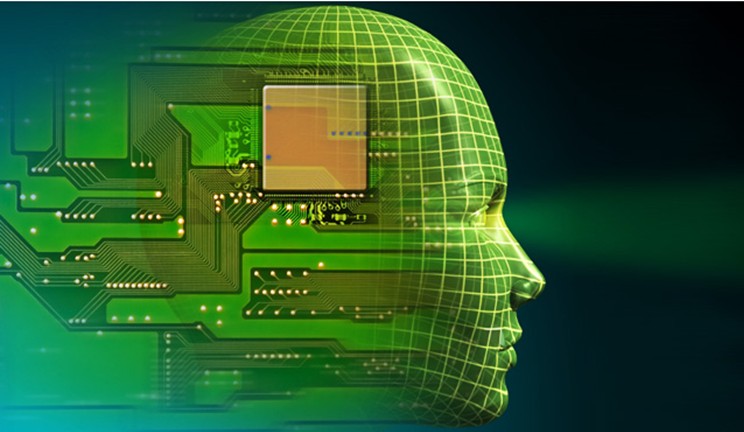 This post am writing right now will most likely be written by a fancy mathetical formulae that’s clever enough to sift through tones of [un]structured data in mere seconds and come up with a great story. Sounds like Cybernet is coming to town? No, this is real and it’s already happening.

An inforgraphic created by Business intelligence company DOMO this year says it all. The inforgraphic gives us an idea on just how much data is generated every minute. 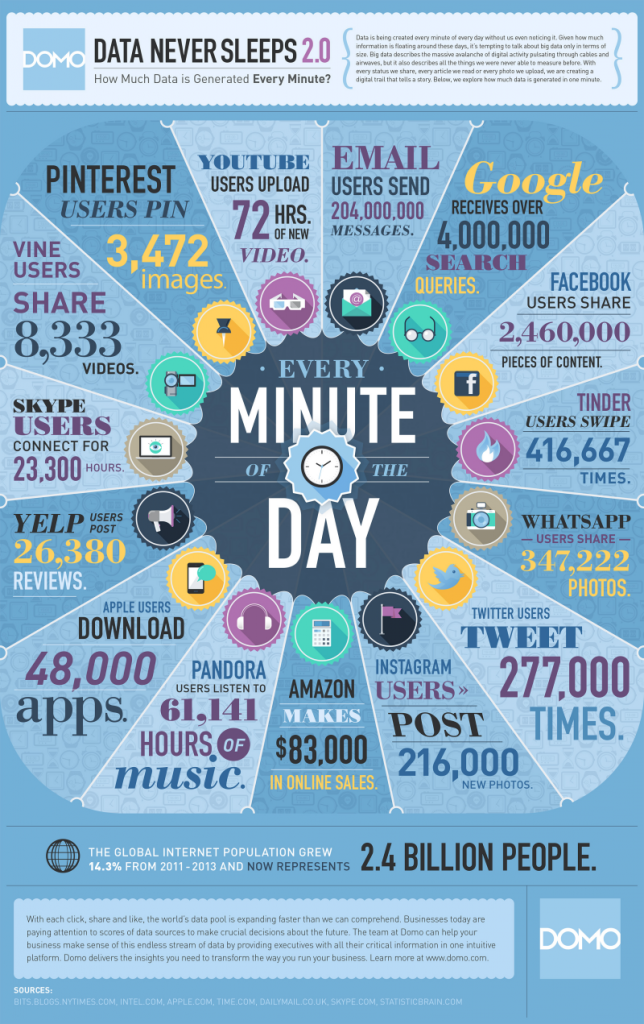 We are experiencing a data explosion of unprecedented proportions. To put it in perspespective, it is estimated that about five exabytes of data were created between the birth of the world and 2003. But how big is one Exabyte(EB)? 1 EB=1,000 petabytes=1millionterabytes = 1billiongigabytes.  I know your head is beginning to hurt as much as mine is. Perhaps Cisco can help us put these figures in pratical terms. One exabyte alone has the capacity to hold over 36,000 years worth of HD quality video…or stream the entire Netflix catalog more than 3,000 times.

Now if you think 5EBs created over humanities history untill 2003 is a lot? Try to imagine this; in 2013, 5 Exabytes of content were created each day. That’s 5EBs in one day…not over a billion years of the earth’s existence.

Now Cisco estimates that by 2015, the internet will experience the “dawn of the zettabyte era”. Each zettabyte is 1,000 exabytes and a zettabyte is equivalent to about 250 billion DVDs. By 2015, the majority of global Internet traffic (61 percent) will be in some form of video—Internet video-to-PC, Internet video-to-TV, mobile video, et al, the Internet and IT equipment vendor said on a blog post.

The growth of AI (Artificial Intelligence)

Artificial Intelligence is the theory and development of computer systems able to perform tasks that normally require human intelligence, such as visual perception, speech recognition, decision-making, and translation between languages.

From IBM’s  Watson supercomputer, to Google’s  Knowledge Graph and Apple’s Siri voice digital assistant on the iPhone, AI in increasingly finding application in even consumer applications. Speaking to Forbes Dr. Yann LeCun, director of AI research at Facebook hinted on the near-term applications of AI; “vision systems that can drive your car, a vacuum cleaner robot that will recognize your furniture and if there’s dirt on the ground, an autonomous lawnmower that will mow your lawn and not take out your flowers.”

Web companies such as Amazon, Google and Facebook are investing big on AI applications. These companies have huge amounts of data as the infographic above showed and its nearly impossible to employ humans to monitor, police and make meaning of this vast pool of data that’s been gushed out every minute. These companies are focused on being more effecient while at the same time cutting costs. They believe that robots are clearly the answer.

Google in particular has taken more aggresive steps in securing its future with the help of robots. The company has been on a robotics companies acquisition spree with  BigDog robot at Boston Dynamics in 2010, Shaft, a small Japanese company, makes one of the most advanced humanoid robots on the planet, Bot & Dolly is best known for making the special effects in the blockbuster film Gravity possible, DeepMind, a London-based artificial intelligence company among other acquisitions. Google is looking at using intelligent robots to improve on its existing products such as search and also invest in the products of tomorrow. For instance the robots are used to teache its search engine to anticipate your needs and offer you results before you’ve finished typing and they are also used Google self-driving cars.

Media buyout and Mass layoffs from traditional newsrooms today are the reality of today’s media landscape.  The Internet, smartphones and ubiquitous digital publishing platforms have removed barriers to entry that previously barred would-be publishers from  getting their work to the masses. The result is a democratization of publishing on the internet where traditional media outlets have to  compete with digital new comers and armateur content creators on social media.

“I work in an industry that has also been profoundly disrupted. The shift of news and information to the Internet meant that the heavy investment in trucks and presses that once served as a barrier to entry disappeared. Insurgents flooded in with new approaches that eliminated much of the inefficiency and created whole new streams of content. Again, great for consumers, not so great for the traditional news industry, because those inefficiencies were also profits by another name.” — David Carr, columist of the Media equation on the NYT wrote.

However, now that everyone is a “journalist” in their own right, indentifying the “signal in the noise” or simply put, fitering out high quality content from gallons of data the internet is spewing out every minute is a daunting challenge. One that traditional media houses with processes and methods more adopted for 19th or 20th century publishing can’t tackle effectively.

That’s why News and information gatekeepers like Google and Facebook are turning to intelligent computer algorithms or robots to help them filter and make sense of today’s vast information. The two companies now exert ernomous power on how users consumer journalism since most internet users come to news sites through them. Facebook alone drives up to 20 percent of traffic to news sites, according to figures from the analytics company SimpleReach. Google’s algorithms determine what news users see on Google News while Facebook’s Edgerank controlls what over 1.3 billion users see on their newsfeed. Cory Haik, senior editor for digital news at The Washington Post, said the shift represents “the great unbundling” of journalism on the New York Times.

It’s not just the big guns investing heavily on AI and media. A startup called Narrative Science raised about $32 million to improve on its software that automates writing reports based on structured data. The company’s software takes data, like that from sports statistics, company financial reports and housing starts and sales, and turns it into articles. The startup told the NYT that their “robot journalists” would be primarily low-cost tools for publications to expand and enrich coverage when editorial budgets are under pressure.

It’s still too early to tell how journalists will co-work along with computers or whether or not computers/robots will replace replace the humans altogether in the new information world. But, what we know for sure is that Journalism won’t stay the same.