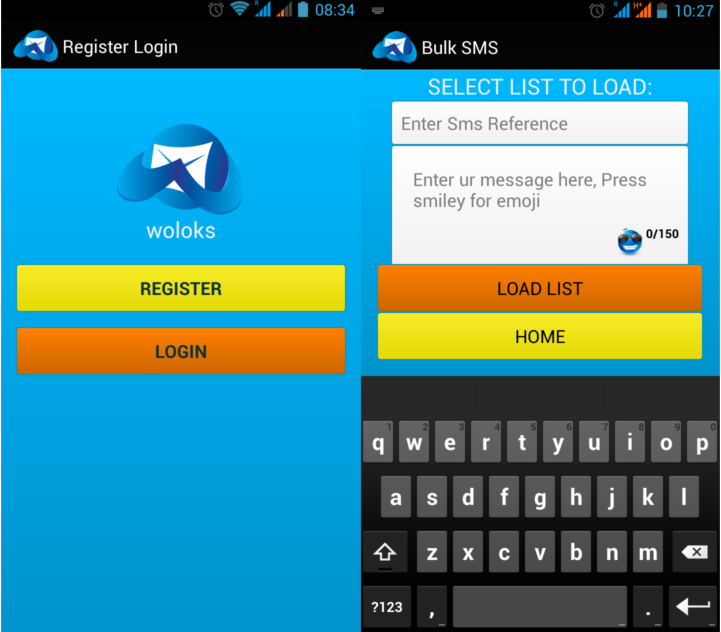 We know Whatsapp is the gold standard in mobile messaging.  However, Whatsapp heavily relies on your mobile plan to send and receive messages. Now Woloks, a Ugandan-based mobile messaging App wants to redefine how we communicate.

Whether the reciever is online or offline, Woloks “just works”. As if that’s not enough, unlike other messaging apps we have today, Woloks also works with smartphones and feature phones alike, Tweheyo Brian the co-founder and CEO told this blog.

Launched earlier this year, the App is re-launching. This time with even more features such as the ability to send bulk sms, and also a mobile marketing concept for companies, organisations and individuals Brian said.

The App is looking at anyone with internet access and more specifically android smart phone users, but the main demographic they are looking at, is Youth and young adults, between ages 15 to 40.

The team has chosen to start with a mobile App on Android for now, but hopes to go cross platform. The team is inspired by the never ending human need to communicate; “What Inspired me to create the app is the fact that communication is very essential and i needed an easy way to communicate with my people” Brian said.

The Apps hopes to win Whatsapp users over with a clever feature. One that enables users to send a message to some one who has no access to internet or doesnot have the Woloks App running.

“Yes there are thousands of social networking but none of them really solves the problem that woloks is solving. Alot of Ugandans have phones but a small percentage of them have smart phones, so bringing a messenger that helps ease communication both ways is a seller of its self.” Brian said.

Woloks, unlike many startups, is an eight-man team composed of developers, marketing, Human resource, and PR experts, and includes developers such as Ivan Mworozi who has worked on products like e-Ride.

This comes after just last month when Ugandan billionaire, Ashish Thakkar  launched Mara Messenger, another Whatsapp rival.  The App is currently in beta phase with a dedicated testing team on a Google group (free goodies available) although it will be available in the App stores “soon”. You can also follow them on Twitter.

13 thoughts on “Meet Woloks, an App that lets you send messages with or without an internet connection”