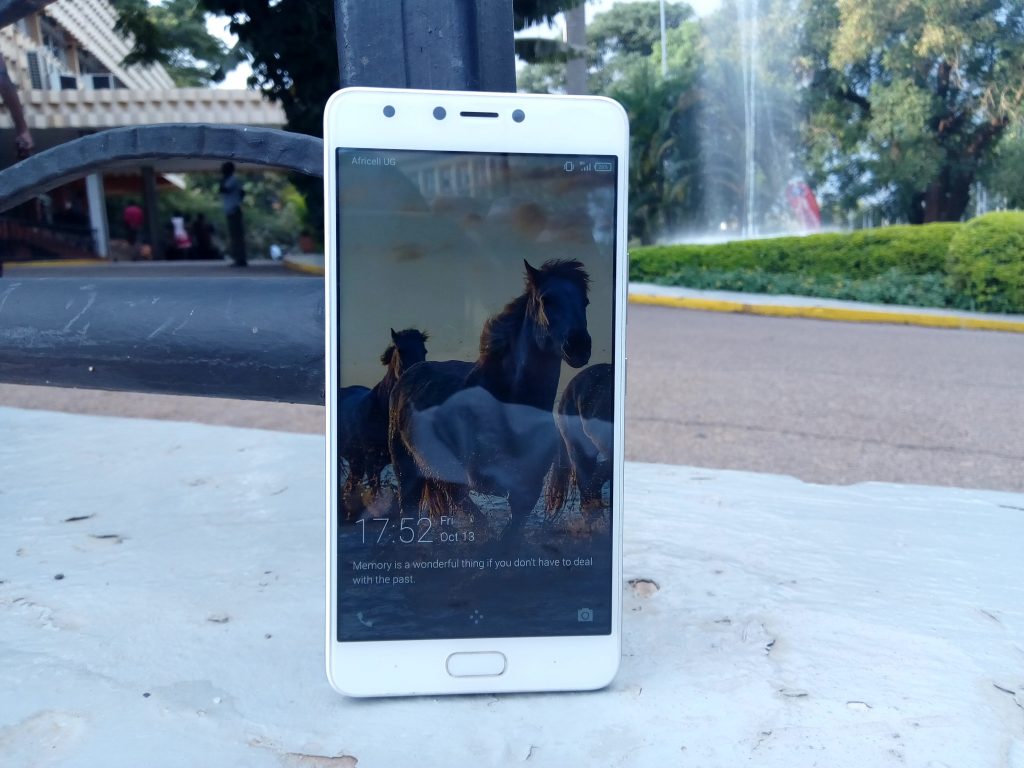 I am writing this review after using the Infinix Note 4 for close to a month, with usage spread across Kampala, primarily on Africell’s 4G network. The device is running the inbuilt ROM of XOS 2.3 (build P57-170515), over Android Nougat 7.1.1 and for the one month I had no update to it. If you are looking for a smartphone that gives you an ultimate maxi experience, for a wallet friendly price, this is where your budget should point at.

The Good Infinix built the Note 4 with a wish to inspire the zealous youths that wish to have a phablet for themselves at an affordable rate. The camera is very amazing, with a fine touch to every image and video captured; the battery lasts long enough to give you endless user experience, and even the charging is real fast with close to 80% juicing in an hour. This, added to an impressive design that is good to handle, a large screen for wide use, dual SIM plus a dedicated micro SD slot, and a great Operating System makes the Note 4 a stand out device on the market.

The Bad There are lots of pre-installed apps, some of which one may never use, that chew up a huge junk of memory and distort opportunity of any other use. The ‘Back’ and ‘Previous Apps’ buttons are also invisible that you have to instill it in your head, and quite a big size that won’t fit in the pocket.

The phone which comes in Ice Blue, Champagne Gold, and Milan Black colours is powered by a 1.3 GHz Octa core MediaTek MT6753 processor and it comes with 2 GB of RAM. It entails a lot of 16 GB of internal storage which can be expanded to 128 GB via a microSD card, runs Android 7.1.1 Nougat OS – backed by Infinix’s XOS Chameleon – and is powered by a 4300 mAh battery. Its a Dual SIM Smartphone with connectivity options like GPS, HotSpot,Wifi, and Bluetooth.

The Note 4 comes packaged in a deep sky blue hard paper box, fully sealed with a thin wrap around it. On top of the box is the device name written in white and centered with the Infinix brand name in the upper left corner. The right corner has a small seal that indicates the ROM and RAM, as 16 GB and 2 GB respectively.

The left and back side of the box have the brand name (Infinix)  indicated on,  while the right side has the device name (NOTE 4).

The bottom side has a seal that spells out the specifications of the phone, proof of the device being authentic – with a series of barcodes and QR codes, and details of the maker. It also comes with a seal that asks you not to accept the phone if it is broken

The device lies on top with a blue cover with the rest of the accessories below the box. In it is the rubber back cover, screen guard,  charger, USB cable, and ear pieces – all sealed 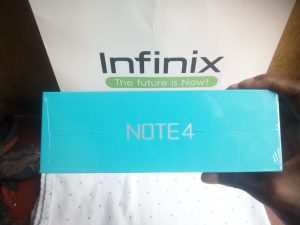 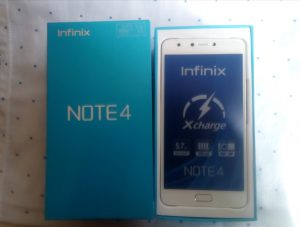 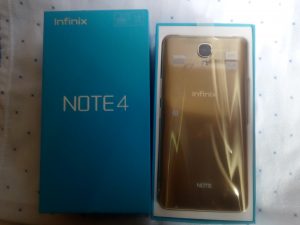 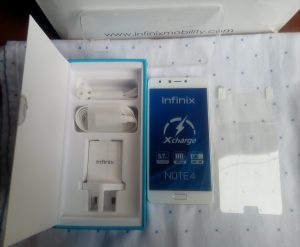 The device I received was embodied in Champaign Gold, the body so sleek and elegant. With the device in hand as the screen faces the holder, you can see the front camera, its sensor, and a flash light. 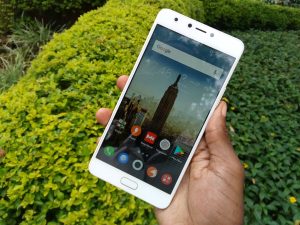 The fingerprint sensor is on the home button, though the experience I had with it was not friendly at first. Unlike the back sensors that require one to place the finger at easily unlock or accomplish a task, the front home screen sensor requires the finger tip to be placed in horizontal form, which is a little of an inconvenience. Secondly, though of advantage, the sense is too fast that it can easily denounce the finger even before fully scanning. So, it needs one to properly place the finger to feed in the print for approval. I later got used to the allocation.

The 5.7-inch screen makes it a worthy Note device,  and makes a holder very confident of their acquaintance. It is good for gaming, at least I tried it out with Real Football 2017, and can guarantee that the enjoyment is way too good. It is also convenient when scrolling through social media News feeds, and websites because of the wide display.

The Full HD IPS Capacitive Touchscreen that comes with a resolution of 1080 x 1920 pixels makes the imagery appear much real and good for the eyes. Infinix employs Adaptative brightness on this one, where the device’s screen brightness can be determined by the environment in which a user is. If you are in a dark room, the screen is at its brightest, while a lighted up room prompts for a lesser brightness.

The top side of the phone, just above the camera, has a headphone jack as the right side has the volume buttons and the power buttons.

The downside has a micro-USB port in between two speaker grills. I got to know that the left grill is an output and the right one is an input. 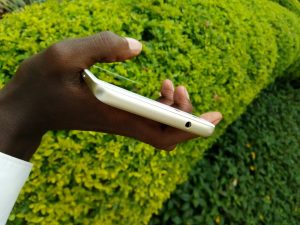 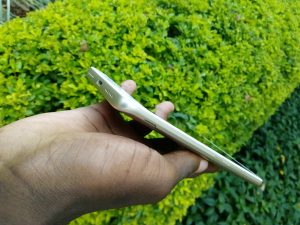 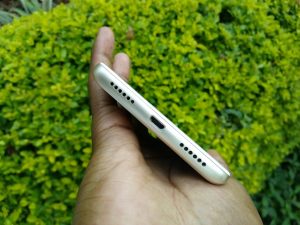 The removable back cover is shiny and can give you a clear reflection of your image. With an Infinix label at the centre, and a NOTE label at the bottom, it has a mark out for the camera and it’s flash light to protrude at the top. 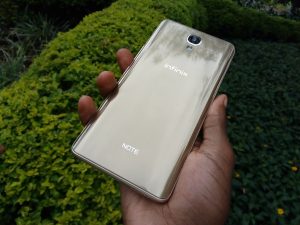 Removing it let’s you see how the SIM cards can be placed in, and discloses the known secret: that the battery is not removable. There is also a dedicated SDcard slot,  if you wish to boost the available ROM. 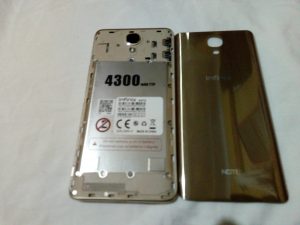 Also Read: 5 specifications that make the Infinix Note 4 worthy of your budget

The XOS family of apps, like on the rest of Infinix smart phones, includes Feedback, System Update, User Guide, Weather, XSecurity, XCloud, XManager, XHide, and XAccount that help with customization and optimization of the device’s functionality.

The home screen is familiar, if you’re really accustomed to Infinix devices, while the app folders on the second homescreen page are accessed with a swipe to the right or left, thus reducing on the number of clicks you’d make to reach them.

I liked the wide collection of wallpapers, which actually tempt you to forget about customization because of the beautiful scenery and inspirational quotes that come with each. There is also a huge chunk of themes and fonts available from the XAccount that make it interesting to work out on your phone.

The other apps can be seen by tapping the A-Z listing icon, and these are the usual apps. They include Google’s family of apps which includes: Google, PlayStore, Gmail, Maps, YouTube, Chrome, Drive, Play Music, Play Movies, Duo, Photos and Voice Search; The standard clock, calculator, calendar, camera, downloads, file manager, FM Radio, Gallery, Music, Video Player, Notes and among other apps that come with every Android device.

The issue with the many pre-installed apps is that they eat up a lot of system space that would have been of much greater use if made available to you.

The Infinix Note 4 comes with a 13-megapixel rear camera and an 8-megapixel front-facing one for selfies. There are LED flashes on both sides, which automatically can sense a dark environment and respond accordingly. 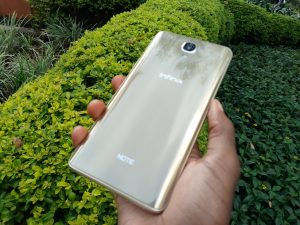 I made an observation of images taken outdoors appearing a bit overexposed, prompting me to often touch the screen to make a more careful focus, and frequently switch from Auto mode to manual. There are also features such as smile recognition, gesture recognition to click pictures and more that make it easier to capture beautiful images.

The general performance is average though it is easy to observe a lag, especially if you have the device in activity for a longer time. Majority of the tasks work out fine, though I noticed that USSD code dialing required more than a single dial for a result, which I questioned.

The device being a Note is good for gaming, but lags back on heavy games. I had to uninstall some due to slower loading and stagnation but basically enjoyed the experience with Real Football 2017.

Also Read: How to split-screen and multitask on your Infinix Note 4

The battery is amazingly great, with a lifespan of almost an entire day of active use, and another half if not heavily used. Infinix employs its Xcharge technology on this, which is super fast when it comes to powering the Note 4. Within an hour,  already 80% of the battery is filled, and the next 30 minutes juiced it up to the brim. There were no serious issues of over heating, be it during use or even charge.

The Infinix Note 4 is available in both offline shops with Infinix branding, and online platforms like Kilimall Uganda and Jumia Uganda. Whereas there is no clear price tag, determined by availability and accessibility, the offline prices range about Ugshs. 610,000 and the online prices about Ugshs. 490,000. 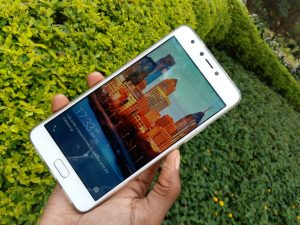 If you are looking for a smartphone that gives you an ultimate maxi experience, for a wallet friendly price, this is where your budget should point at. It beats all the other smartphones in the same price range, and gives Infinix a good run on the market. With it, you wouldn’t ask for any other.