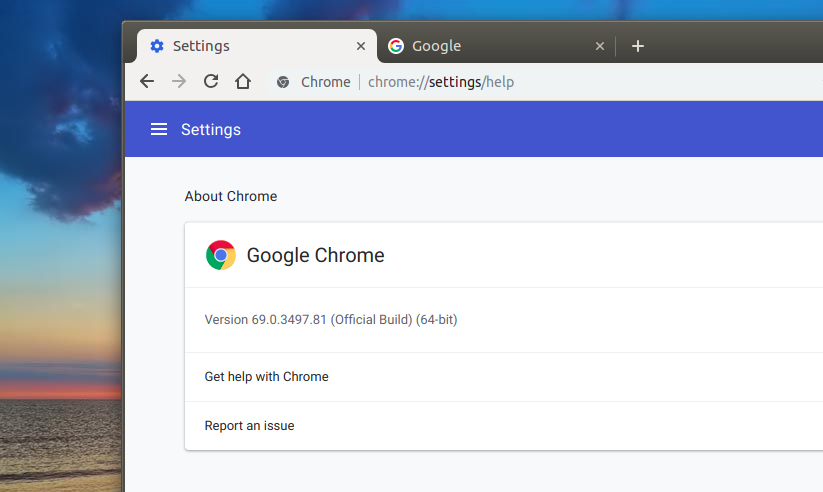 So its been 10 years since Google Chrome was launched. Time really does fly. To mark they 10th year since initial launch, Google has launched Chrome version 69, and this release is huge as it brings quite a bit to the table. The most notable change has to be the new theme that I must admit, looks really slick. But that isn’t the only thing that’s new. You can now personalize Chrome’s New Tab page with background images and custom shortcuts. We can’t possibly look at highlight all that is new in this release, but we can focus on the major changes.

You know you’re using the new Chrome 69 when you’re hit with the new theme that’s got rounded corners everywhere, a redesigned address bar and more fluid animations and transitions. This “new design across all operating systems” is briefly mentioned in Enterprise release notes for Chrome 69. Simply titled “Browser interface changes.” This could be in line with Google’s long term vision of having a common design language across it’s products.

Chrome Browser will have a new design across all operating systems. Highlights include Microsoft® Windows 10® notification-center integration, touchpad gesture navigation on Windows, and autofill updates.

Pick a screen, any screen.

We’ve got something new for you, no matter where you use #GoogleChrome https://t.co/dKBdXSOUUi pic.twitter.com/0GzvTmpoiJ

Instead of sharp and angular corners, tabs are now rounded at the top left and right, as well as the bottom in how they slope into the rest of the bar. To better emphasize the current page you’re viewing, other tabs lose their outline and are visually separated only with a short line. Similarly, the new tab “plus” icon loses the well-defined button.

The address bar is now pill-shaped with rounded corners all through. The dropdown of search suggestions and URLs only span the length of the Omnibox rather than the page’s full-width.

So this isn’t exactly new. Just right-click a password field and select “Generate Password.” This feature was previously available but hidden. Also, Chrome has had a password manager that’s woven into your Google Account. This is getting updated. Chrome can now automatically generate and save random passwords for you.

Google has also improved Chrome’s autofill feature. The browser should be better at filling in passwords along with credit card numbers and addresses.

Unless you’re an elephant, Chrome saving your passwords is going to come in handy. #GoogleChrome https://t.co/5qB5mFwGDy pic.twitter.com/szyWgYJj6W

We techies are strong advocates of password managers like LastPass and Dashlane. Truth be told however, not many people are willing to go out of their simple lives and install add-ons and apps on their phones, even if its meant to make their online accounts safer.  Chrome has a better shot at bringing password managers to the masses, making it easier for everyone to use strong, unique passwords everywhere.

So every browser out there allows you to quickly search the web using the address bar. In the earlier days, browsers came with two fields up-top, a dedicated search bar and the address bar. Chrome 69 merges the two thereby simplifying the general layout of the browser. It then goes a step further.

The new #GoogleChrome is smarter than ever, even answering your questions before you finish typi… pic.twitter.com/m81xtSp0S5

“Omnibox,” as Google chooses to call it, just got more powerful. Many answers to searches now instantly appear in the Omnibox as you start typing, just as they do when searching on Google’s website.

The death of www in URL’s

In a move to apparently cuts down on unneeded “trivial” characters that noobs and techies alike shouldn’t really bother with, Chrome 69 has stopped displaying www. and m. in website addresses in its URL bar.According to the browser’s developers, this is bit is not that relevant and you need not worry about it in 2018. This hasn’t sat well with many netizens and experts alike.

Multiple folks have pointed out in a Chromium bug report about the missing letters, the absence of www. can mislead people into thinking they’re at the wrong site. For example, www.pool.ntp.org and pool.ntp.org are two very different services – the former being a website, and the latter a round-robin of NTP time servers.

If you are already using Google Chrome, which you most likely are, and if you’re ready to check out Chrome 69, it’s easy to update. Simply follow these steps: