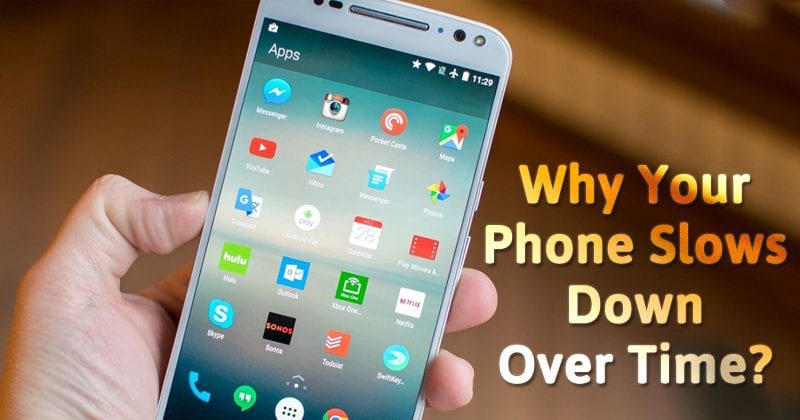 It is not uncommon for you to begin to notice a dip in the overall performance of your gadgets (smartphones particularly) after years or months of usage. Yes, this might bother you if you consider factors like how much the phone cost you to purchase as well as how fast it used to be. But when you understand that even you and I (as humans) tend to slow down as we grow older, you’d come to terms with the fact machines wouldn’t be any different.

That said, nothing happens without a reason. It’s only fair you understand why the performance of your smartphone dwindles after months or years of usage.

One of the very common reasons why your phone slows down over time usually revolves around the fact that the physical components of your device (chipset, GPU, etc.) are fixed while the applications they run changes all the time and doesn’t exactly stay the same. Your phone’s hardware could be fully optimized for the features of the apps that were in vogue at the time it was released, but as newer apps (or updates to old apps) are being released, your phone may not be able to handle them as fast as it did with old apps.

Very old phones might struggle with newer apps and games.

Also, it is no news that as times goes on, developers lace (new and old) apps with loads of features which makes these apps more demanding. And since you cannot exactly upgrade the processors of your phone like you do with softwares and apps, your phone’s performance with these new apps will not be as swift as it is with old apps.

It’s possible some apps become more demanding over time as more features are added. Facebook is definitely more bloated than it was five years ago

The same can be said for new operating systems. Typically, smartphones’ hardware some of their capabilities to handle certain tasks after updating their operating system.

You’d be surprised but it’s darn true: the lower the available (read: free) storage space you have left on your phone, the slower it runs and operates. This is because the write speed of your internal storage gets slower as you fill it up with data (photos, videos, app cached files, and other documents). Consequently, this results into slow retrieval of data as well as slow speed when storing new files.

To remedy this, it is advised that you have at least 20% of your internal storage free at all times. So, you regularly delete unwanted/unused documents, you can backup your multimedia on your computer, external drives, or on online clouded storages like Dropbox or Google Photos etc. You could also use your phone’s built-in cleaner or a third-party cleaner app to delete junks files eating up your phone’s storage.

Installing too many applications

This might seem pretty obvious yet many smartphone owners do not see it as a reason enough for the sluggish performance of their device. The more you stuff your phone with new or old apps, the slower it gets as there is limited resources to attend to you swiftly compared to when you first bought the device. These apps will have to compete for resources like storage space, RAM, CPU (both in the foreground & background) etc. And this takes us to the next point.

These are applications that are running behind the scenes, even when you didn’t open/launch them. Imagine you have like 5 applications open an active but there are about 5 more running in the background without your knowledge, even when you aren’t using them. Asides slowing down your phone’s overall performance and speed by using up storage space, system memory, and CPU, they equally take a toll on battery life.

A fix to this is navigating your phone’s Settings menu to see apps running in the background and shutting them down or ‘Force-stopping’ them. Alternatively, you can install a third-party “Freezing app” which prevents apps you rarely use from running — foreground or background — unless you directly launch them in the freezer app.

Could be your phone’s manufacturer

There have been reports of smartphone manufacturers purposefully slowing down performance of older models of their devices. So sometimes, “It the maker of your phone.” Not background apps, not low internal storage.

One OEM that admitted to doing this is Apple after users noticed their iPhone 6, iPhone 6S and iPhone SE were slower than they used to be. Apparently, Apple released an OS update to specifically targeted at throttle the speed of older iPhones. While some reports Apple does this whenever there’s a new iPhone model, Apple officially released a statement explaining that the update was meant to prolong battery life and ultimately prevent older iPhones from abruptly shutting down [to protect its electronic components] as their batteries age, in cold conditions, or have a low battery charge.

“…we released a feature for iPhone 6, iPhone 6S and iPhone SE to smooth out the instantaneous peaks only when needed to prevent the device from unexpectedly shutting down during these conditions [cold temperature, a low battery charge or very old batteries].” Apple said.

This might make no sense but according to an independent research carried out by GeekBench, processors in iPhones truly slow down performance-wise as batteries age. This validates Apples reasons for intentionally throttling speed of older iPhones but there are still concerns that it could be a tactic to get users to by new iPhone models. Whatever it is though, the fact remains that your manufacturer could be the reason why your smartphone slows down over time.