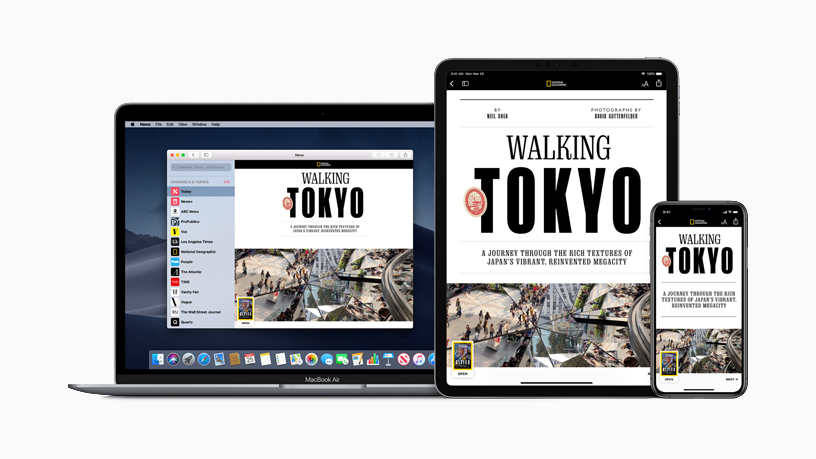 In addition to it’s free Apple News service, Apple launches an even more robust new platform themed the Apple News Plus. The ‘Plus’ addition is there for a reason as you would have to pay for this plan to gain access to 300 magazines cutting across several categories like Sports, Lifestyle, Fashion, Food, Politics and more. Some of the magazines featured on this platform are The New Yorker, Time, National Geographic, GQ, Vogue, Vanity Fair, The Wall Street Journal and more. All of these will be at your fingertips for $9.99/month in the US which would have been much more if you were subscribing to each magazine individually.

The news feature will be accessible once you update your macOS Mojave or iOS on your devices. Bundled into your Apple News app, the Apple News Plus will be part of the app and can be gotten with just a swipe giving you access to hundreds of magazines. Apple is offering a 30-day free trial, so you don’t have to pay at first. Afterward, you will be billed on a monthly basis which will differ in each region considering it is $9.99 in the US and $12.99 in Canada which are the only two places where the service is available for now. However, Apple stated it will be launching the service in other places like Australia,  and the rest of Europe.

Just like the Apple News, you have top stories, trending stories, recommendations that are protected from advertisers and even Apple itself. This is achieved by downloading content and then sorting them out on the user’s end based on your reading habit. You can browse the featured section or head to magazines under specific topics or even peruse through the entirety of available magazines catalog. There is Live Cover, that shows animated pictures instead of static ones.

As it appears, this is the product of Apple’s acquisition of Texture – a news app startup last year. In segue, this is a nice addition to the list of services offered by an already large service company offering a bunch of premium magazines at a go for a reasonable fee.