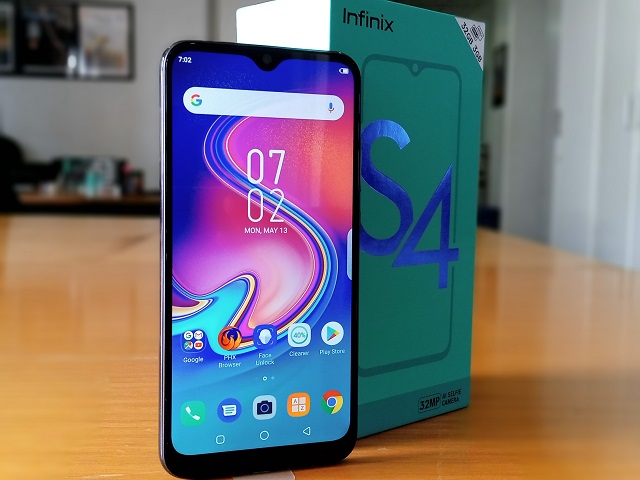 Infinix never stops amusing me with how far they push the limits to offer high-end features for everyone. The company introduced the Infinix S4 that shall now lead the S-for-Selfie series. It has been released just after the Infinix Hot 7 which we recently reviewed. Below you will find the Infinix S4 review.

The Infinix S4 is a renewed upgrade to the S3 and last year’s troubled Infinix S3X. It’s also the closest Infinix has gotten to a true full view device.

Does Infinix S4 fetch notable enhancements over the Infinix S3X? How does it equate to the new Samsung M series and other contending devices? Let’s answer all of these questions and more in our Infinix S4 review. But first, the specs.

Probably one of the major talking points on this device. The Infinix S4 has a gorgeous 6.2-inch screen and looks just awesome from the front. The selfie camera exists in a water drop notch, which is inconsequentially smaller than the notch on the Infinix Hot 7 and the TECNO Camon 11 twosome.

Unlike many other Infinix phones, the back panel of the Infinix S4 is made of glass according to the company. However, we felt like it is the same plastic panel that was used on the Infinix Note 5. But, Infinix does add a gradient finish to spice things up. Perhaps it won’t matter once you plant the phone in a case. Or, perhaps it will.

Nonetheless, there’s no refuting that the Infinix S4 is super comfortable to wield – which really is saying something since the phone houses a massive 4,000mAh battery. The charging port at the bottom is, annoyingly, the micro USB port, again. The dual SIM tray on the left edge has a dedicated card slot.

The volume rocker keys and the power button settle on the right edge while the loud speaker, charging port, headphone jack and microphone inhabit the bottom edge of the Infinix S4.

Flipping the phone reveals a not one, not two but three camera modules aligned in a vertical setup with a quad-LED flashlight just below them.

On the downside, the fingerprint scanner requires us to really stretch our index fingers all the way to the top, which is to say it’s a bit inaccessible. But there is Face Unlock too and it proved to be a more reliable alternative on the handset. However, fingerprint will still be used by the majority since the S4 has no front flashlight to illuminate a user’s face for face unlock in dark environments.

The gorgeous HD IPS, LCD Capacitive touchscreen display is what really makes the S4 tick. The display has a resolution of 720p x 1520p. We have come to terms that 720p is the standard on Infinix devices of this price range. However, the water drop notch that makes for a visibly large display wins back some love.

The colour rendering on the screen is all but spectacular with a level of readability in direct sunlight that won’t make you complain. However, Infinix would do better in this area. The Infinix S4 screen brightness can be controlled automatically but you might want to get prepared for being blinded by the display before it self-adjusts in a dark environment. Eye care mode is present to make for a comfortable reading experience at night.

For anyone who is asking, there is a choice to black out the status bar and hide the notch. However, we guess not many people will be using it.

The Infinix S4 has an Octa-Core 2.0GHz, MediaTek Helio P22 chipset that has a higher clock speed than the Qualcomm Snapdragon 430’s 1.4GHz which featured in the Infinix S3X. This octa-core mobile platform is rather mediocre but does all the day to day Android business with ease. It is also one of the best you can get on a phone of this price.

We didn’t face any issues with regular usage, even when engaging with multiple apps. However, high-end games are barely playable at low graphics. The unit we received has 3GB RAM and 32GB storage, and a dedicated card slot. Or in other words, we expect the performance to hold well in the long term.

Both the fingerprint sensor (after you successfully find it) and face unlock (in good lighting) are moderately fast. We’d have liked them faster.

The Infinix S4 boots Android 9 Pie blended with Infinix’s in house XOS 5 Cheetah. We covered the new features in Infinix’s custom UI. Apart from the visual changes, the core features of XOS are still present. Sadly, the company is trying to overly monetize the UI and you will notice a lot of ads especially when connected to the internet. Is the new XOS 5 Cheetah on the S4 good? What differentiates a good interface from a not-so-good interface are usually subtle improvements and simplicity of usage, but that’s a subjective matter.

Let’s speak about the new all-pervading smart panel. While we like that presents us with the features we care about the most everywhere without the need to go back to the home screen of closing the current app, we hate that it encroaches on the display. We would appreciate if we could trigger this smart panel by a certain gesture or button combination.

The phone supports 4G connectivity. Also, call quality is clear and we didn’t face any issue with calling or connectivity in our area.

Just like the all Infinix past phones, the S4 comes with a micro USB charging port. While this seems not to bother many users, and the company, read the differences between Micro USB and USB type C to realize the difference and why we can’t wait to have it on an Infinix phone.

The Infinix S4 packs a non-removable 4,000mAh battery unit and this is actually at par with battery focused devices like the itel P33. But the bigger 6.2-inch display on the Infinix S4 has greater battery demands that throw the S4 out of the race with the power focused itel P33.

The 4,000mAh battery backup on the Infinix S4 is reliable, just not the most excellent on the market. Nonetheless, the Infinix S4 can easily last a day of heavy usage. However, it doesn’t support fast charging; meaning you have to turn to the bundled regular charger and it will take about 2 hours to fully charge the phone.

I watched hours of video on mobile data and WiFi. Add to that an hour of music streaming on Deezer, a couple of hundred WhatsApp messages, Facebook, Twitter, two mail accounts running in the background, selfies here and there and about half an hour worth of voice calls. I still managed to go through the day before I reached for the charger (the S4 still had 16 percent juice).

On average usage, you can register two days of battery juice. Although the S4 wasn’t specifically made for consumers who prioritize battery backup above all else, its battery stamina is still commendable.

The audio output via loudspeaker at the back is fairly decent. When using headphones, the audio experience is excellent.

This is the business end of the S4, cameras. The rear camera is a troika of sensors. The camera unit embraces a 13MP autofocus sensor, an 8MP fixed focus wide angle lens and a 2MP depth sensor that makes for better portraits that than software powered bokeh effect.

We haven’t noticed a major improvement in the camera performance over S3X. The images look to be of similar quality with what we took with the S3X dual camera. The only difference between the S3X and the S4 camera is the new wide-angle lens that puts more subjects into the frame. You can shoot very nice landscape photos using this wide-angle lens.

The camera has a couple of shooting modes that we are already familiar with from other Infinix devices. However, the Infinix S4 camera is heavy on artificial intelligence. The normal mode is the AI Cam. This means that the camera automatically adjusts the settings to give you the perfect shot in different lighting conditions and subject movement.

There is also AR Shot on both cameras. This augmented reality misses the mark and looks really awful. I doubt many people will use this feature because of the extremely annoying results. When we tried the AR shot mode, the caps and sunglasses seemed to be floating yet the idea is making them look like they are part of the subject.

All that said, the S4 adds an interesting 8MP wide angle lens and a couple of AI features to the S3X’s setup. Apart from the watermark on the bottom (if enabled), it’s hard to tell the photo quality of the two devices apart.

The selfie camera, however, has a higher resolution 32MP sensor and this increase is accompanied by an analogous improvement in selfie quality. The selfies look stunning and super detailed. The bump to 32MP is an unprecedented pixel count on any Infinix device, ending the Infinix S3’s 20MP selfie camera’s reign. It is also the first time a 32MP phone is launched in Uganda.

The selfie camera takes nice photo’s in illuminated environments but things begin to change as night approaches. Just to be clear, there is no front flashlight on the Infinix S4. Aiming for a full-screen device didn’t come without compromises.

Infinix relies on the low light capability of the selfie sensor and a burst of white light from the screen to illuminate the subject. This doesn’t provide quite enough for a solid light. The end result is an over processed picture with a lot of noise.

The shinning body and spec sheet of the Infinix S4 almost make its predecessors ugly and inferior. However, it is more prone to scratches than the Infinix S3. For UGX 585,000, you get a large 6.2-inch display with a small water drop notch, better selfies, better connectivity, a better portrait mode for the rear camera and a wide-angle lens.

When compared to the emerging competition from Xiaomi and Samsung M line, what the S4 doesn’t offer in quality makes it up in beauty and affordability.

If you are not much into high-end gaming, would value selfie quality over build material and lack of fast charging, and are restricted by a budget, the Infinix S4 won’t disappoint.