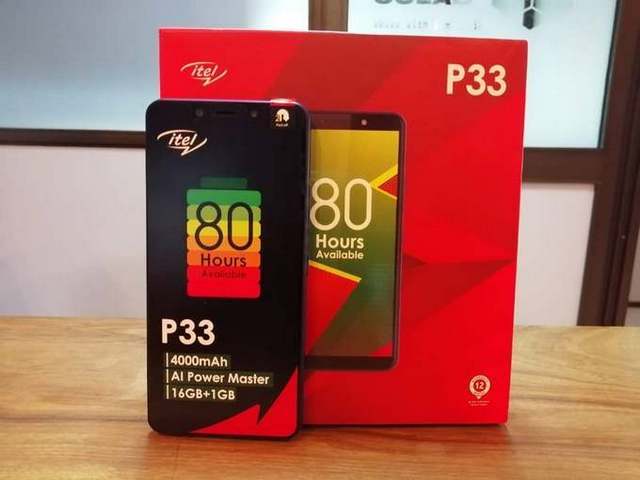 itel is one of the Chinese manufacturers who offer affordable smartphones in Uganda and Africa at large. The P33 is the latest creation by this manufacturer, and we have tested what the device has to offer (itel P33 first impressions) beyond its large battery as you are going to see in this itel P33 review.

The itel P33 launched in many Africa regions earlier this month. Although there wasn’t a lot of buzz around the April 8th launch of the itel P33 in Uganda, there are many aspects of this device that will interest budget consumers.

The P33 is the recent iteration of the itel P series devices which are focused on putting as much battery power in your hands as possible at a budget price. It comes with a 4,000mAh battery which gives sufficient endurance for several days.

The MediaTek SoC and a single GB of RAM look dwarfed on paper but deliver well with Android Go. For the price of UGX 270,000/=, the itel gives a good Android experience with just a couple of caveats but a first time smartphone users should be okay with this. Let’s remind you of the specs before we dive into the itel P33 review.

itel, like the vast majority of other manufacturers, shamelessly continues to use cheap design materials for low budget phones. Whereas this might be a no brainer, we have come to expect more from smartphones. The midrange section is flooding with flagship grade features. Can’t that trickle down to the low end of the spectrum? The itel P33 is a really powerful phone but its design material doesn’t do it enough justice.

The P33 has a plastic profile and most design elements that have almost become mandatory on any smartphone (forget the port-less Meizu Zero). The selfie camera, speaker, LED flashlight and light sensors inhabit the thick top bezel.

At the back of the P33, there is a vertically arranged dual camera setup. The LED flash fits on the bottom of the camera modules to complete the optics department. The fingerprint scanner lies in a natural position in the top middle part of the phone. A single loudspeaker occupies the bottom left corner of the back.

The plastic back cover is removable, revealing a non-removable battery behind a metal plate (like in the Infinix Hot 7), two nano SIM slots and a microSD card slot. Is the nano-SIM finally making a firm stay in the entry-level section? We would really be glad.

The volume rockers and textured power button are housed on the right edge. The micro USB port and microphone occupy the bottom edge while the top edge is home to the 3.5mm audio jack.

itel P33 has an elongated display with an aspect ratio of 18:9. This allows the smartphone to lie comfortably in the hand. It has an HD resolution of 720×1440 with sharp appearance. The screen size is 5.5 inches with multi-touch functionality.

The P33 is the most recent device in the itel Power series. As its name depicts, the device has a very powerful battery. The itel P33 basically focuses on battery power but doesn’t compromise on other features. It provides heavy battery power as compared to other devices, in and out of its price range. Many people are fed up with charging their Smartphone’s every time. So, this is the phone which meets their requirement in a smart manner.

The company promised 80 hours of uninterrupted power on moderate usage after a full charge and we are here to confirm the claim. The 4,000mAh battery of the itel P33 keeps going and going. Android Go power efficiency and AI power master contribute positively to the P33’s good battery stamina.

After a full day of usage, we still had 70% of juice left. You will not find as many devices with such power on the market, at least not at this price. The battery life is so-so good compared to more expensive devices.

Related: Top Infinix smartphones with 4,000mAh battery you can buy in Uganda

itel expanded the onboard storage from 8GB of the P32 to now 16GB on the P33. However, the RAM was maintained at 1GB. Storage is a major determinant during a smartphone purchase given how much content people want to store in these companion handheld devices.

The expanded storage means more photos, videos and files can be stored on the itel P33. The great news is that there is also an option to expand the storage via a dedicated microSD card of up to 32GB to even sore more on this very affordable device.

Performance-wise, the itel P33 is not your gaming phone. While it does everyday tasks of browsing, social media usage and others pretty well, it doesn’t hold well with over-demanding games like Asphalt Nitro and FIFA 19. However, if you are not a hardcore game player, you can live with the performance that the P33 brings to the table.

Apps load pretty well on the P33. However, for even better results out of the itel P33 we advise that you install light versions of the apps. For example, using Uber Lite instead of the main Uber app. These lite apps won’t put so much stress on the already low resources of the itel P33.

The itel P33 boots the Go edition of Android 8.1 Oreo. This has been fully customised to deliver stellar performance on low spec devices like this.

The itel P33 reads from the same book the iPhone does when it comes to app arrangement. All the apps are displayed on the screen. I will never get used to having no app drawer on an Android phone.

While this is not a huge turnoff, it is pretty annoying trying to find an app drawer that is absent. However, installing a launcher such as Nova Launcher fixes this immediately.

Other aspects of the user interface are Android business as usual. However, we find the preinstalled apps pretty annoying.

The P33 is better than its predecessor in the optics department. It comes with a dual rear camera setup for enhanced photo experience. The 8MP + 0.8MP sensors at the back take care of all the rear photo needs. The 8MP is the primary sensor the 0.8MP sensor helps with the depth sensing. Therefore, it has very limited everyday life usage.

The rear camera is assisted by a single LED flashlight which adds a bit of life to night shots.

The P33 supports shooting modes such portrait (which blurs the background), Pano (great for taking wide landscape pics), HDR and a Pro mode for manual settings.

The selfies are handled by a 5MP fixed focus sensor which is aided by a single LED flash to illuminate dark environments.

Photo and video quality on the P33 are obviously average. They look better compared to phones at the same price but cannot compete with more expensive smartphones. Night shots are breeding grounds for noise and colours tend to be washed out in very bright light. However, you will get some good shots for your social media and status updates with the itel P33.

Sometimes, the front camera enabled face unlock on the itel P33 took over 4 seconds to unlock, sometimes we just gave up and used the fingerprint. However, it has a Liveness mode feature which you can use to prevent face unlock using your still photo. Here, you need to blink when using face unlock.

Related: Face ID is not yet entirely secure. Why your brother/sister can probably unlock your phone

The rear-mounted fingerprint will be the most used for many users since it lies in a more natural position where the index finger easily reaches. It is still not as fast, but faster than the face unlock option. We found it necessary to wipe the finger when it failed to recognize it sometimes.

The itel P33 is an exciting phone chiefly for its price. I would recommend it for anyone who doesn’t want to sell an arm or leg to get their first smartphone.

However, itel needs to switch up things like the single GB of RAM to something more appealing. We also didn’t appreciate the absence of 4G on the device in a world where internet speeds really matter. The increase in onboard storage is a good sign for feature releases and we hope this continues.

The cameras are a great upgrade from the P32. However, portrait mode didn’t seem to work even after multiple attempts. The battery is the most excellent feature of the P33 and hats off for itel for pulling this off well and still keeping the price low.

At just UGX 270,000/=, the itel is one of the most affordable devices in Uganda today and we recommend it for first-time smartphone buyers, buyers looking for a phone with a strong battery and those just looking for a cheaper alternative which doesn’t compromise smartphone experience (a lot).