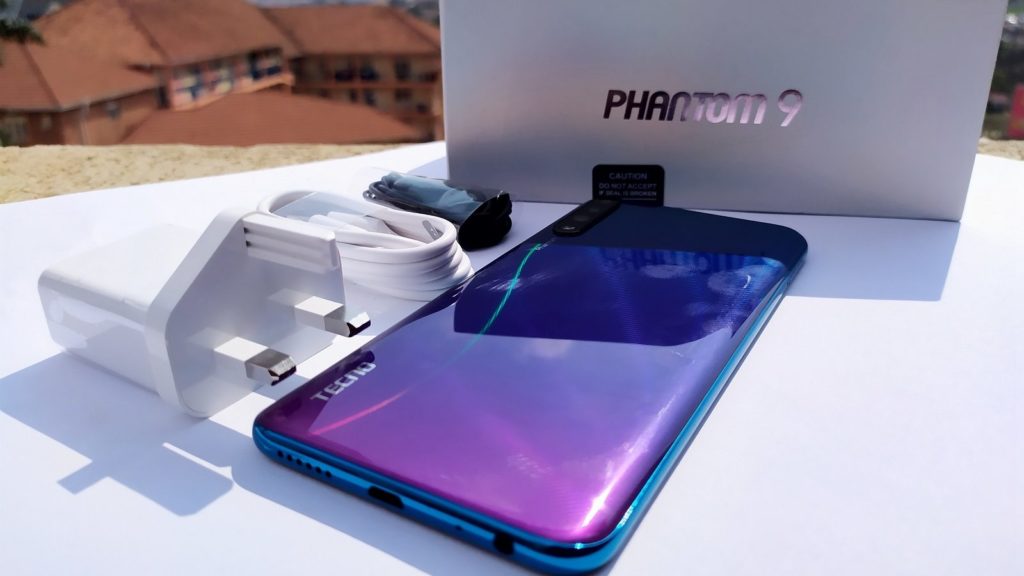 Also located here is the 32MP camera, the earpiece and two LED flashlights that are cleverly hidden in the thin top bezel.

Going over to the edges of the phone, there is a volume and power button on the right side. These are clicky and easy to reach because they reside near the middle of the frame. The top left side has the card tray. The tray has 3 slots to accommodate two nano-sized SIM cards and a microSD card, all at the same time.

At the bottom edge, there is a 3.5mm audio jack, a micro USB port, a microphone, and a down-facing loudspeaker. I don’t really understand why TECNO continues to use micro-USB port instead of Type-C port on their smartphones.

Apart from the protruding triple-rear cameras and LED flash, there is nothing to interrupt the beautiful Lapland Aurora back. However, this beauty gets filled with fingerprints because it’s made of plastic. The good news is that TECNO included a case in the package to protect from scratches and fingerprints.

Wielding the TECNO Phantom 9 in the hands is a good experience. You will notice that the Phantom 9 is lighter than the Phantom 8. It’s solid with a comfortable grip and feels really thin which can be attributed to its curved sides.

The fingerprint scanner has been shifted to exist under the display. This is a very excellent feature on a below UGX 1M device. It works well however; it is a bit slow and needs close to a second to unlock the device. This is a lot slower than physical scanners. Because it relies on the backlight, it becomes even slower to unlock the Phantom 9 in very bright environments. Thankfully, there is a face unlock feature which is faster.

TECNO went for a dot notch on the Phantom 9. The bezels around the display have almost disappeared especially on the sides and top. The 6.4-inch full HD+ AMOLED display has 84% screen-to-body ratio. The screen has a good viewing experience with nice viewing angles. The colors are punchy while the blacks are deep thanks to the AMOLED screen.

Media consumption (videos, games and viewing photos) on the Phantom 9 is awesome because of the large screen real estate. We didn’t find it necessary to hide the notch because it’s not very intrusive. However, apps are still displayed in their default display ratio that doesn’t extend to cover the notch area.

The Phantom 9 depends on a single down-facing speaker for your audio needs. While not as loud as what TECNO furnished into the now extinct Boom smartphones, the speaker on the Phantom 9 is crisp and loud. This makes it good for casually watching videos, listening to music, or playing games. Serious audiophiles might want to plug a good pair of headphones via the 3.5mm audio port for better music experience.

The TECNO Phantom 9 is equipped with a tripartite of cameras stacked vertically and a 32MP camera resting in the dot notch to take care of the selfies and face unlock. The rear camera trinity comprises of a 16MP main shooter with f/1.8 and Phase-detect-auto-focus, an ultra-wide 8MP lens and a 2MP, f/2.8 depth sensor.

The cameras come with standard features like AI Cam mode, Professional, Panorama, AR Stickers, HDR, Google Lens and more. There is AI capability that analyzes the scene and adjusts the settings for a better shot. AI on the Phantom 9 is well adapted for dark skins.

The Phantom 9 brings some camera capabilities that are unheard of at this price. It is capable of taking macro shots from as close as 3cm. This is vital when capturing small details. We took a few macro shots and the results were very exciting. It was hard to believe you can get so much photo power for less than a million Uganda Shillings.

Speaking of photo power, the TECNO Phantom 9 captures photos with plenty of details with good contrast. Colors are also punchy but sometimes the saturation tends to be on the warmer side.

Selfies, as expected are good with sharp details and accurate colors. The beauty effects implemented come out naturally and don’t look very artificial like on the Infinix Note 6. Check out the samples below.

There is AI scene recognition; AI Face Beauty which reduces blemishes and gives a younger look. The selfie camera has a pair of LED flashlight to improve detail in dark environment. TECNO is the first company to break through the limitations of a dot notch to include LED lights in a thin bezel.

For videos, the TECNO Phantom is capable of recording at a maximum of 1080p at 30fps. There’s no video stabilization so footages can come out shaky if you don’t use steady hands.

The device runs on HiOS 5 based on Android 9 Pie Oreo. The interface doesn’t differ a lot from what the Spark 3. You can choose to navigate using the usual on-screen keys or using gesture navigations which can be enabled in settings.

When it comes to features, the Phantom 9 has WhatsApp Mode, Bike Mode, Security and Privacy settings, Split-screen, One-handed mode and more.

TECNO Phantom 9 is powered by an octa-core Helio 35 chipset clocked at 2.3GHz. This is a mid-range chipset but with an above-average RAM capacity. We didn’t have any major performance issues.  The Phantom 9 sliced through the tasks we threw at it with major confidence. Whether it is gaming or multitasking, the Phantom 9 didn’t choke.

In terms of storage, you get a handsome 128GB of storage and 6GB of RAM. This is a good storage head start but if you fancy more space, there’s a dedicated microSD card slot that can accommodate up to 1TB cards and OTG support.

The Phantom 9 has all the basic connectivity features which include dual-SIM with 4G LTE, WiFi, Bluetooth, and GPS. However, TECNO has been slow to upgrade their devices from the micro USB. Look at the differences between micro USB and USB Type-C. We are still hoping and praying for the USB Type-C.

The battery capacity didn’t change from what the Phantom 8 offered, at 3,500mAh. The battery is not as strong as that of the Infinix Note 6 but we were able to complete a full day without worrying about a blackout.

Even after being connected to WiFi, over 100 tweets, pics here and there, we comfortably went through the day on a single charge. Battery stamina is very dependent on usage though but it will only be a few instances where you need to run to the charger before the day ends.

The TECNO Phantom 9 packs big improvements over its predecessor while also sees some downgrades from what the Phantom 9 offered. It has better and prettier design but it is vulnerable to fingerprints and scratches. The AMOLED display with a smaller notch is a big step in the right direction but the slow fingerprint scanner makes us wish they kept the physical scanner. It also packs a lot of power in terms of hardware but sees reduced 4G speeds compared to the older Phantom 8.

It’s a versatile performer that can satisfy those who want to raise their selfie game or fancy being trendy with newer tech. What might break this awesome package is the presence of cheaper options that have a few caveats from what the Phantom 9 offers. Even with this competition, I think the TECNO Phantom 9 has a good fighting chance.

TECNO Phantom 9 is finally available across Kenya for KES. 24,999. You should be able to pick up the device from all TECNO retail shops, Safaricom outlets, and JUMIA at a recommended retail price of KES. 24,999. It is unclear whether or not pricing will vary from different outlets based on the press release.