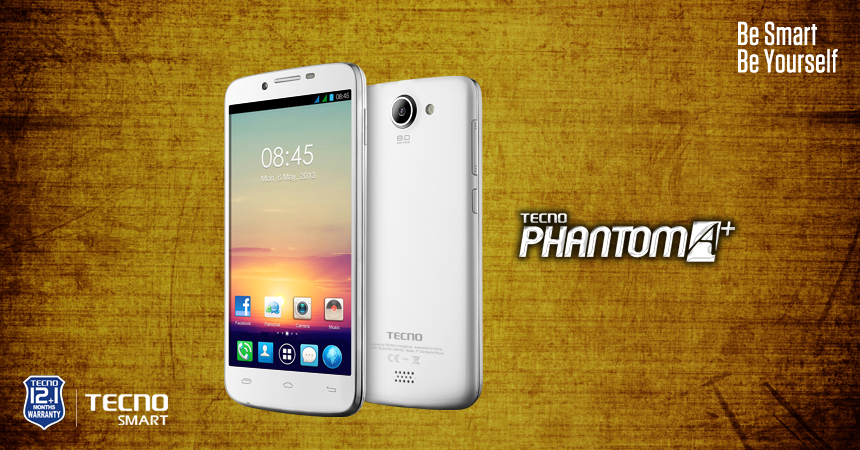 We’ve seen various smartphone vendors claim to design and build smartphones for the African market. For instance, Microsoft with its 4Afrika program released the 4Afrika phone which is a customized version of the HUAWEI Ascend W1 running Windows phone 8. However, up until now, none of the phones we’ve used so far met the simple criteria of a phone truly designed with Africa in mind.

The Tecno Phantom A+ completely surprised us coming from a less known vendor — Tecno — in the smartphone market. Tecno is a China-based mobile phone manufacturer that exclusively does business in Africa with its brand presence felt in about 12 countries. The Chinese company before wetting its feet in the smartphone waters, has been known for producing low-end feature phones running harebrained software that’s nowhere close to global brands such as Nokia or Samsung.

But perhaps all this while we’ve misjudged Tecno! We’ve hard-tested one of the companies flagship — the Tecno Phantom A+ — and here’s why we think this is the first smartphone designed to suit the African setting.

Dual Sim Card Phone
Most mobile users here in Africa own not one,  but two or more Sim cards — a feature that’s not common on other high end smartphones. Among other reasons, users keep two Sim cards to take advantage of low rates across various networks, a better service aspect on one network over the other.

Tecno knowing this trend has made no mistake of not supporting dual sim card feature in its flag ship smartphone devices.

An Offline App Store
Tecno ships the Phantom A+ with a flew of Apps — some by African developers like Afrinolly and Spinlet from Nigeria, Mxit from South Africa and UShahidi from Kenya — that you can install without a data connection. The implication of this innovation is that users save on data charges that they would have otherwise incurred by downloading these Apps from the Play Store. First time smartphone users also can quickly find Apps that they might like installed.

For [African] developers, the local store gives their Apps invaluable visibility that they otherwise never get from the global mainstream stores with thousands of Apps.

A Decent Battery and an External Battery Bank
Long battery life is perhaps the most coveted feature on a phone especially in Africa where some rural areas haven’t seen the national grid. Vendors like Nokia who’ve excelled in those areas have won the hearts of mobile users in Africa. But when it comes to the smartphone world, we need a miracle irrespective of the device you’re using.

Tecno once again innovates by shipping the Tecno with an external 2200 mAh battery at no extra cost. When your battery runs out, instead of carrying a feature phone as backup, you can charge your smartphone with the external portable charger.

A Radio and an SD Card sorts your Multimedia
Once again, Radio — the Killer-App that’s often ignored by everyone except the users here in Africa — is the most versatile mass communication media that’s almost a must-have feature on feature phones. Apparently, Radio on high end smartphones is perceived to be “not cool” by vendors and yet some users listen to radio more than they call, text or do anything else.

Together with radio, as if to complete the multimedia loop, Tecno ships the Phantom with an 8GB external SD card which is enough for users to store a local media library of their music, videos and movies.

Instead of radio or an SD card, mainstream global vendors have preferred online music and movie streaming services like YouTube, iTunes, Netflix which severely suffer bandwidth and payment bottlenecks here in Africa.

A Torch, Dust-resistant Poly-carbonate Shell
Considering that many towns/Villages in Africa are not yet on the national grid darkness is still an issue such that even major town still experience power outages more like load shedding or power rationing. The Phantom considered this when it embedded an inbuilt Torch app in the phone and another Torch inbuilt in the Battery Bank which apparently can light for 52 Hours when fully charged.

More so, Tecno goes ahead to add a dust and scratch resistant poly-carbonate back cover that looks and also feels good.

An Affordable Price
Tecno knows that price is a big deal in Africa and its for the same reason that they started out with not just affordable but cheap feature phones. The Tecno Phantom A+ is being sold at a retail price of 650,000 Ugx about $ 250 compared to $500 plus dollars for devices in its range like the Samsung Galaxy S and S2. Phones like these will help in increasing smartphone and internet penetration.

Widely Distributed Customer Care Centres
Tecno has not one or two, but many customer care centers branded CarlCare  in the countries that it has presence. When we probed the device for these centers using Calcare inbuilt App in the Phantom we could see at least 10 centers across Uganda only. With a warranty of 12 month and these widely distributed centers, users are assured of support should their devices get problems. Compare this to vendors such as Apple, HTC, Samsung who have few or no customer care centers at all.

Tecno also knows how to work with traders downtown instead of carriers and high end smartphone shops in fancy malls like Oasis mall or garden city who have access to a wider market of phone users. The downside to this strategy for Tecno is the brand perception that its devices are only for phone”illiterates” who are unaware of global trends.

Little known and somewhat an underdog in a tightly contested market, Tecno which exclusively does business in Africa with its understanding of the African market is set to give the likes of Samsung a run for their money. That’s already happening in Nigeria.

4 thoughts on “The Tecno Phantom A+ : Finally Here’s a Smartphone specifically designed for Africa”