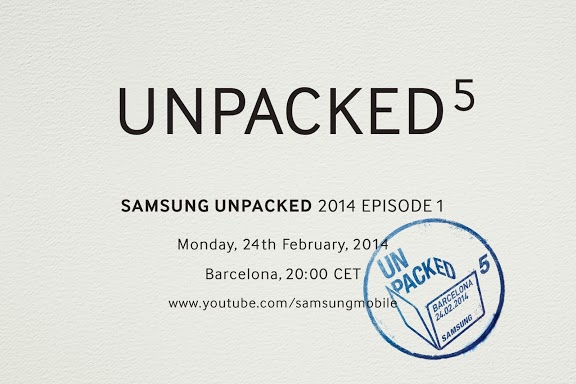 Samsung has officially announced that they will hold an unpacked event at the Barcelona Mobile World Congress on the 24 of February ditching the earlier suspected date of April 2014. They did not specifically mention that they will release their most anticipated Galaxy S5 flagship phone but calling the event “Unpacked 5” alludes to the same. Seeing that Samsung launches multiple products during the year, it’s possible that they may just announce their flagship or multiple devices.

The Mobile World Congress is the worlds biggest Mobile event where Manufactures vendors carriers showcase the latest in mobile technology and its here that Samsung announced the Galaxy S2 in 2012 which turned out to change the fate of Samsung forever. Since then, they have released the Galaxy S3 and S4 as their flagships with many other galaxy models in between.

The highly anticipated S5 has been rumoured to pack a host of features set to outdo the iPhone 5 and probably 6 too as the two are sworn rivals suing each other left right and centre. We can only wait to see what the Korean phone giant is going to release and how it will fair against the competition. Stay hooked for the latest updates on Samsung