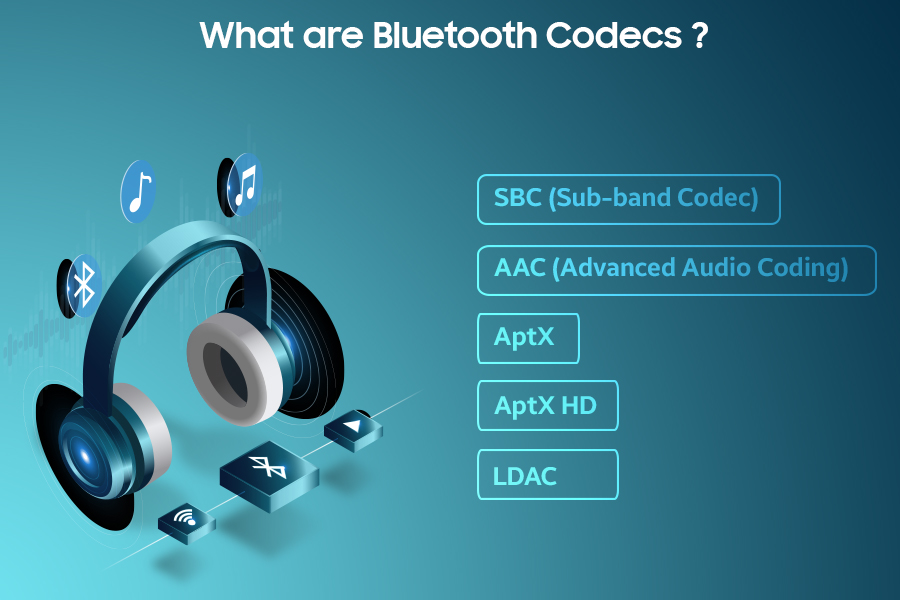 As far as dealing with audio is concerned, Bluetooth is fast becoming the go-to option especially for smartphone users considering the increased number of Bluetooth audio devices being shipped. In 2019 alone, about a billion Bluetooth audio devices were shipped which in part can be attributed to the elimination of the audio jack on some of these smartphones and increasing popularity of wireless earbuds like AIrpods.

Sample rate: Otherwise known as sampling frequency is how many times in a second a sound is sampled. Each sample is a data point and the more frequency of samples the better and this parameter is measured in kilohertz (kHz). For example, standard CD audio has a sample rate of 44.1kHz which means each second of the audio on the CD has 44, 100 samples. For better audio, it is sampled at least twice the limit of human hearing which is 20kHz, even if improvement in audio quality is hard to be perceived beyond 44.1kHz. Although high-resolution audio goes up to 96kHz, the more the sample rate the larger the file size.

Bit depth: This the number of bits (of data) that is present in each sample and it dictates the audio file’s resolution. For CDs, the bit depth is 16-bits although high-resolution audio has 24-bits and it increases file size exponentially.

Latency: This is the period of delay usually between the time the audio originates to when the sound outputs.

In reality, Bluetooth bandwidth has a limited amount of data it can carry, which is where codecs come in to provide a balance of audio quality, less noise and minimal latency. It decodes digital audio which has undergone compression (encoding) and encodes it in a format that is transmitted via a Bluetooth signal.

There is one other thing that will be mentioned often throughout the course of this article which is psychoacoustic and it has to do with the science of sound perceptible to the human ear. The essence of this is to find out what to take out while compressing that would not reflect or least reflect on the audio quality.

Sub-band codec is the basic codec Bluetooth audio devices have as it is compulsory for every device with the A2DP standard It is ubiquitous so there is no issue of incompatibility between devices and in the case of codec mismatch SBC is the default codec that will be reverted to.

However, the psychoacoustic model here is elementary and does not provide room for the best audio quality. It supports a bit rate of up to 1500kbps in theory but it is limited to a max of 328kbps in Bluetooth devices by manufacturers for optimal functionality. For sample rate, SBC has support for up to 48kHz and offers acceptable audio quality.

Moving on to Qualcomm’s codecs which you will predominantly find in android devices and happens to be a better option than SBC due to its better audio quality as well as stable connection.

The aptX codec is able to provide faster audio data transfer which helps limit data loss. Although it still uses lossy compression, it is able to deliver 48kHz sampling rate LCPM audio with a bit depth of 16-bits at a bitrate of 352kbps.

Also, there is aptX HD also from Qualcomm with an even richer bit depth of 24-bits of LCPM audio data with the same sampling rate as aptX but with a max bitrate of 576kbps. This is found in more high-end Bluetooth audio devices and smartphones.

The aptX LL (LL for low latency) is more like an aptX codec with a lower buffer setting allowing it to achieve latency of as little as 40ms with makes it especially handy in gaming and movies.

Moving on to the more recent aptX Adaptive which employs the low latency feature of aptX LL and audio quality of aptX HD. It supports bitrate from 279kbps to 420kbps with 16-bits/44.1kHz and 24-bits/48kHz Hi-res audio. Although not quite as fast as aptX LL it can achieve latency of as low as 50ms. It is said to replace aptX LL when it is fully adopted.

This is Sony’s proprietary codec which was later included in the Android open source project (AOSP) and is now available in Android Oreo and higher. The key feature here is its variable bitrate that can go up to 990kbps with support for sampling rates up to 96kHz. On the other hand, there is the question of how much is perceptible to the human ear which begs the question if the high sampling rates and the higher bit depth matter if the audio format is lossly compressed?

According to soundguys.com, at high bitrates of 660kHz and 990kHz, the audio quality is compromised above 20kHz. However, at these bitrates for a 44.1kHz/16-bits LCPM audio, it has a slightly better signal to noise ration than aptX HD. Also, performance varies from one device to the other based on the preset standard from the manufacturers and you would have to dig deep in developer settings to tweak it if you want to.

A product of collaboration between Hi-res Wireless Audio (HWA) union and Savitech and it stand for low latency and high definition audio codec. LDHC is one of the only two codecs with the Hi-Res Audio Wireless certificate alongside LDAC. Relatively new, the codec is supported by Android 10 as part of the AOSP and supports bitrates of up to 900kbps and a bit depth of 24-bit.

Furthermore, it is capable of handling a sampling rate of up to 96kHz and was first featured on the Huawei Mate 10 smartphone which gives you an idea that you might only see this on premium devices.

On the other hand, there is the LLAC (Low Latency Audio Codec) which can sometimes be referred to as LHDC LL because it is basically a version of LHDC with lower latency. That being said, it also offers up to 24-bits bit depth with the bitrate and sampling rate capped at 600kbps and 48kHz respectively. The catch here is that it offers as low as 30ms latency which makes it well suited for gaming and was first featured on the Huawei P30 smartphone.

AAC is one of the most popular codec after MP3 and employs a complex lossy compression method and is the most common audio format on the internet. No license is required for streaming or distributing content in AAC format but developers and manufacturers do have to pay a license fee. It is the standard audio codec for YouTube and the default audio codec for Apple devices.

In order to preserve audio quality, AAC employs a sophisticated psychoacoustic approach to lossy compression intending to minimize reduction in perceptible audio quality. For this reason, it requires more computing power which makes more power consuming than others.

Despite this, how each manufacture implements the codec differs greatly and on this note its performance varies depending on the device. Apple devices has shown to have the better AAC codec performance in comparison to Android devices.. Most devices have max bitrate of 320kbps or 256kbps for AAC, however, iOS devices mainly limits transfer rate to 250kbps.

Unveiled in the CES 2020 event, the new codec is poised to replace the SBC standard as the default codec for Bluetooth devices with A2DP. It offers support for folks with hearing difficulty using its multistream feature to offer a better experience.

Its Bluetooth audio sharing feature also allows you to share your audio with others, so you can listen to a song on one ear while your friend listens to another thing on the other ear. It is not quite on devices yet and information is still rolling out concerning this new tech.

Considering not only technical specifications but how it translates to perceivable improvement in audio quality by the human ear. In addition, both the device (source) and the Bluetooth headset or speaker must support a particular codec for it to work. In that regard, we must put into account how available a particular codec is.

That being said, aptX HD still proves to be the best option for Android while for iOS AAC still remains the go-to option. For bare minimum latency, aptX is still the best option considering it is more supported by devices.