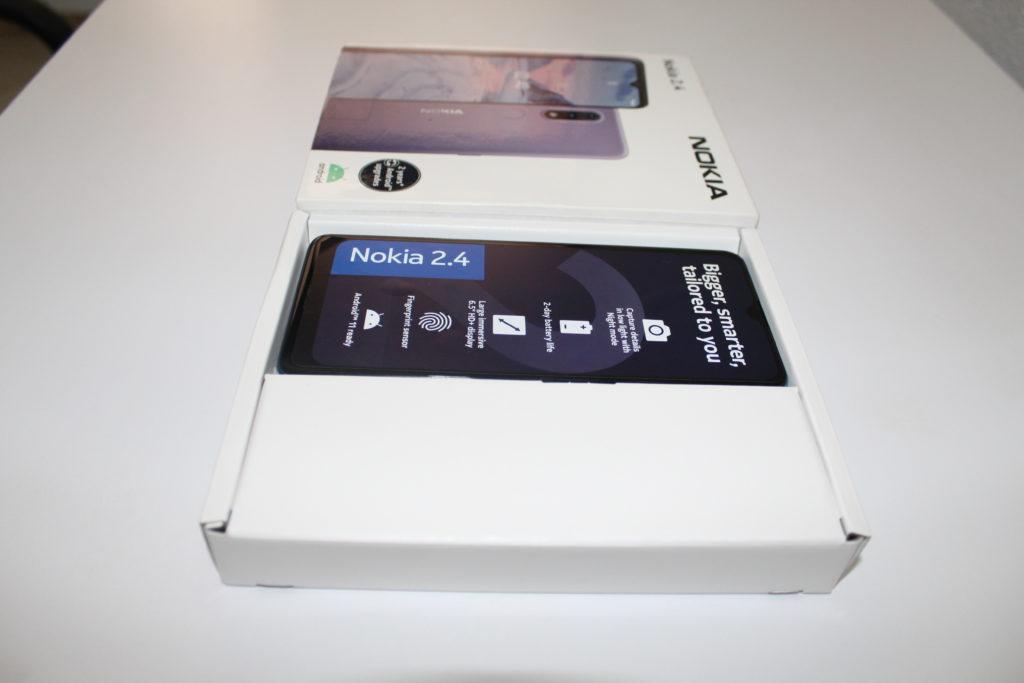 HMD Global has recently released a new entry-level device in the form of Nokia 2.4. A successor to last years Nokia 2.3 and features a slightly bigger display, more RAM and storage and a slightly better battery.

I have had the Nokia 2.4 for a couple of days now and in this post, I document some of my thoughts and first impressions. Will this phone help set a new bar for low budget phones, or get lost in a sea of mediocrity? Find out in the full review later in the week.

What’s In the Box?

Sliding over the box reveals the gigantic Nokia 2.4 itself with a specs sticker on the screen. Under the phone is the complimentary sim-ejector tool followed with a bunch of user manuals & warranty card and a complimentary clear case.

On the other side of the box, we get the 5W charger, micro USB cable and a pair of 3.5mm earphones. The box setup and arrangement feels alien and so much better compared to the Transsion devices we’re used to unboxing. That is if you care about that sort of things and comparisons.

Not only to the hands and eyes but the Nokia 2.4 feels so nice and solid. It features a unibody design and the back panel comes with a nice textured matte finish.

Upfront we have a 6.5 inch IPS LCD display with a 720*1600 resolution. The bezels surrounding the screen are a little bit thick for today’s standard but this is easily forgiven due to the entry-level nature of the device.

Pixel density is one of the key factors in screen quality, serving as a measure of how sharp a display is and Nokia 2.4 packs a 220 PPI ( pixel per inch) display which makes it easier on the eyes when used in too much sunlight.

A waterdrop notch along with the top bezels houses the speakerphone and a 5MP selfie front-facing camera.

On the left side, we have the triple card slot for the two nano sim cards and a microSD card. We also get a dedicated Google Assistant button here on this side of the phone.

Moving to the right side, we get the volume rocker and power button.

Up top, we have the secondary noise-cancelling microphone and the 3.5mm head jack port.

Down to the bottom, we get the main microphone, a micro USB port and a single loudspeaker at the far right end.

Finally flipping it to the back, we get a dual rear camera vertical setup with a 13MP Autofocus lens with a 2MP depth sensor and finally a LED flashlight. Here we also get the capacitive fingerprint scanner and some moe Nokia branding in the middle.

Powering the Nokia 2.4 is the MediaTek Helio P 22 chipset with a PowerVR GE8320 GPU. The phone comes in two variant of a 2GBRAM/23GB storage and 3GB/64GB storage options.

The Positives( What We Liked So Far)

Stock Android Experience: The software show is stock Android10 which is thanks of course to Nokia’s inclusion in Google’s Android One program. According to HMD, a software update is already planned for 2021 and the phone receives a 2-year software upgrade guaranteed.

I am enjoying using the stock android for now. Features like guest mode where you set up an instance for someone using your phone for a short moment without giving them access to sensitive apps like messages comes in really handy when a colleague wants to take a quick tour of the phone.

Battery: For the battery, we get a 45000mAH cell which unfortunately seems to support only 10W charging and to add insults to the injury only a 5W charger is included in the box.

The battery is enough to last you a full day on one charge though and on the 5W charging brick. No need to beat yourself as it does a decent job to fill up your phone in about 3 hours. I juiced up the phone from 5% battery to 60% in 2 hrs and 31 minutes.

Camera: The 13MP main camera and a 2MP selfie front camera doesn’t do a good job. Nokia has a 2MP depth sensor camera at the back and the idea behind such a sensor is two-fold: First, to allow more light and, second, to offer incredible detail.

This sensor does a decent job in low-light conditions but not a groundbreaking photography should be expected from specs like this.

Face Unlock: I have had trouble using the face unlock option, ever since setting it up I haven’t unlocked the phone using that option. Maybe it’s because I had it set up at night but it should be something a software update can fix it up but the face unlock is buggy and haven’t worked for me.

Nokia 2.4 is now available in retail stores (online (like Jumia) and offline) across African countries. This unit was purchased for 499,00UGX from Jumia during the Black Friday sales.

In Nigeria, Nokia 2.4 is ₦ 52,500 on Jumia and seems like it isn’t subjected to the Black Friday sales deal.

Overall, the Nokia 2.4 seems to be a solid run on the mill entry-level phone that can provide users with the absolute basics for a relatively low price.

There are other alternatives in the same price range that offers a lot more in terms of performance, cameras and display. However, after getting some hands-on time with the Noki 2.4 it’s build quality and durability is something that has a definite advantage.