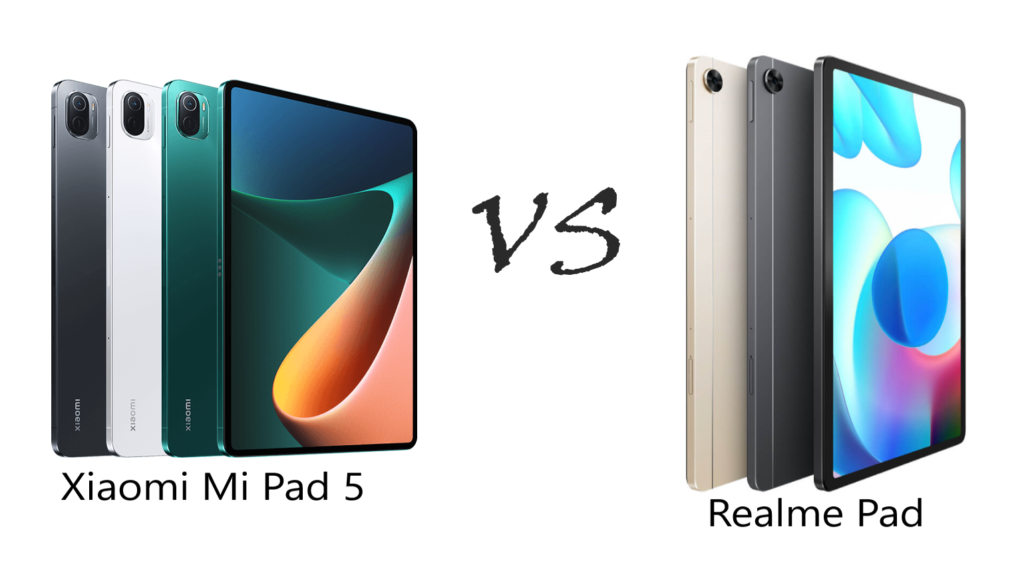 It is officially Android tablet season and after a few years of hibernation, they are back like they never left. With it comes the opportunity to enjoy an Android large form factor at an affordable price. The two undeniably worthy budget candidates out of the recent Android tablet releases are the Realme Pad and Xiaomi Pad 5. You can easily make a case for the two tablets considering one belongs to the affordable category and the other comes at a more affordable price point.

In other words, it is a matter of what your budget is and what it is you’re looking for in a tablet. The Realme Pad is the first tablet from Realme and it embodies the budget nature of the brand. Elsewhere, there is the Xiaomi Pad 5 that offers better features and more powerful specs at an affordable price still.

The two tablets are both 4G LTE tablets although you can still get the WiFi version of the Xiaomi Mi Pad 5 if you want. The two Android tablets feature a nice sleek design both with a thickness of just 6.9mm. There’s also a metallic finish on the back of the Realme Pad and Xiaomi Mi Pad 5. To be honest, they both feel premium when held with a solid unibody build about them although the Realme Pad has a smaller form factor.

Over on the display end, the price disparity between these two Android tablets starts to show. On one end, there’s the decent 10.4-inch WUXGA+ LCD screen with bold bezels on the Realme Pad. On the other end, there’s the Xiaomi Mi Pad 5 which has an 11-inch TrueTone WQHD+ screen that supports DCI-P3 and a 120Hz refresh rate. Not to mention there is also stylus support for more productivity. In the display aspect, the Xiaomi Mi Pad 5 is far ahead of the Realme Pad.

Internally, the price difference continues to show as you have a MediaTek Helio G80 with 3GB/4GB RAM on the Realme Pad and a more powerful Qualcomm SD860 processor on the Xiaomi Mi Pad 5 paired with 6GB RAM. This makes me the Xiaomi Pad 5 the clear choice for power-intensive task and gaming.

Another thing worth mentioning is the software experience. The Realme Pad does not have a Realme UI for pad which means it is not optimized for tablets. Unlike the MIUI for Pad on the Xiaomi Mi Pad 5 which have been modified to work better on tablets. This gives the Xiaomi Pad 5 a more adaptive Android tablet experience in comparison to the Realme Pad where the OS is pretty much still like a smartphone one.

Furthermore, the two Android tablets both have a large battery with the Realme Pad coming in at 7100mAh and the Xiaomi Pad 5 with 8720mAh capacity. The latter also has a faster 33W charging while the former stands at 18W. This is a fairly decent power to take you through the day and beyond for an average user.

Furthermore, they both feature an 8MP front camera that you can use for 1080P recording or video calls while there is a 13MP rear camera on the Xiaomi Pad 5 and an 8MP sensor at the back of the Realme Pad.

It all boils down to two things which is what you intend to use the tablet for and your budget. If you intend to do a lot of technical work and the tablet is meant to serve you mostly in a productive capacity then you should opt for the Xiaomi Mi Pad 5. In fact, any performance intensive usage like gaming is suited more for the Xiaomi Mi Pad 5 at just €349 and even lesser with early bird deals as low as €299/£299/$350.

However, if you’re looking for a simple day to day tablet, for classes, meetings and multimedia pleasure, then the Realme Pad is a good deal on a budget of €160/$189.