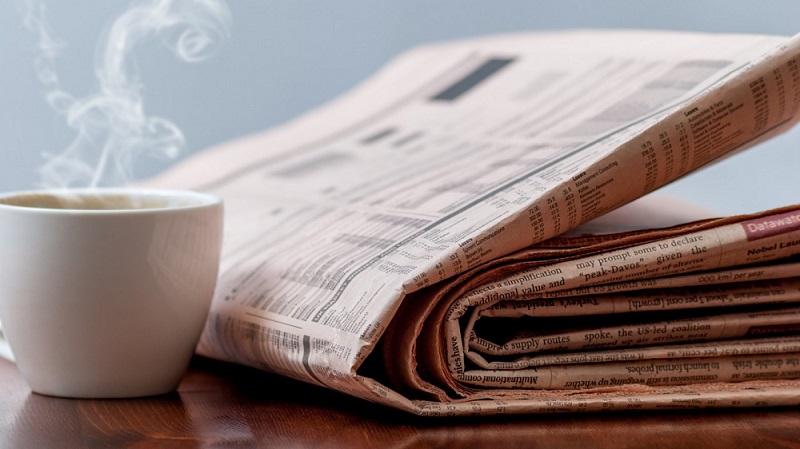 Uganda has the second youngest population in the world after Niger and over 7 million youth are between the age of 15 to 24. Naturally these Dot Com Museveni kids are ardent Facebookers, who count the money in their pockets in MBs and Rolexes. The longest interest they give current affairs  is a quick glance at the newspaper rack on the street as they chase plot from point A to B. Not that they are to blame. Current affairs in Uganda normally comprises of depressing news of the often beaten drum of corruption, rising government expenditure and all that.

But media houses serve a much bigger purpose. Newspapers such as New Vision, Daily Monitor and Observer chronicle our history as a country. It is often said that to understand where we are going, we need to first know where we are coming from. Social media wasn’t designed to archive news stories for later perusal and we are not aware of the criteria needed to see TV recordings of past years. But even then, the oldest Ugandan broadcaster, UBC annually takes us back in time with archived old footage we would never otherwise have been able to access.

We recently wanted to know the scope of the archived material at Uganda’s main newspaper websites: New Vision, Monitor, Bukedde and Observer. These media houses are custodians of Uganda’s current affairs as it becomes history, told from a Ugandan perspective. For researchers and knowledge seekers alike, these archives are treasure troves of information you won’t find anywhere.

We used Museveni, being the most talked about Ugandan individual of the last three decades. Before we delved into our local material, we searched for one of the best archived newspapers and landed on the venerable New York Times. Observe the simplicity and functionality of their archived news stories. Museveni first makes an appearance on 29th June 1979, seven years before his eventual ascension to power. We could search archives going back to 1851! Alternatively, we could do 24 hours, a week, month, year or specific dates. 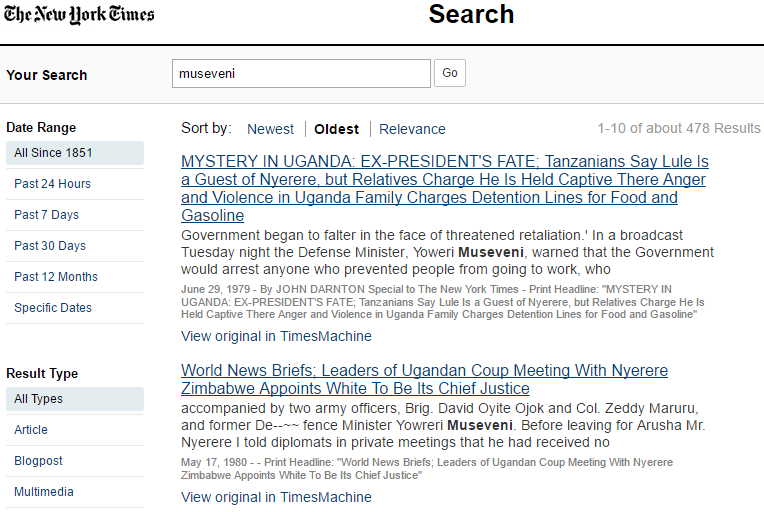 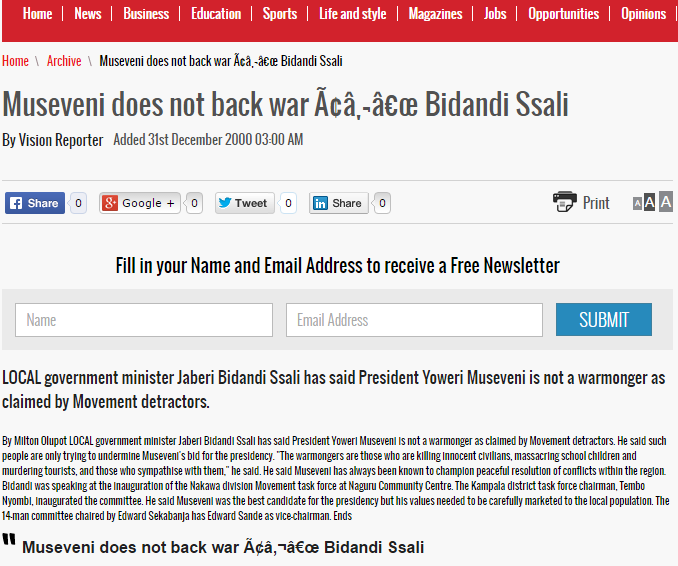 Naturally, the only other newspaper in Uganda that can compare to New York Times is the New Vision. Sadly, not by a long short. Much as New Vision has been printing news since the 80’s, their digitalisation of their papers is wanting. The navigation is horrible, we couldn’t see the exact date and a snippet of each entry unless we opened it. Worse still was the tiny irritating font which is a murder to the eyes. We also noticed that there is a lot of unintelligible symbols in the archived news. Clearly the New Vision needs to hire online editors to rectify these unprofessional mistakes. And a graphic designer to choose a user friendly font. 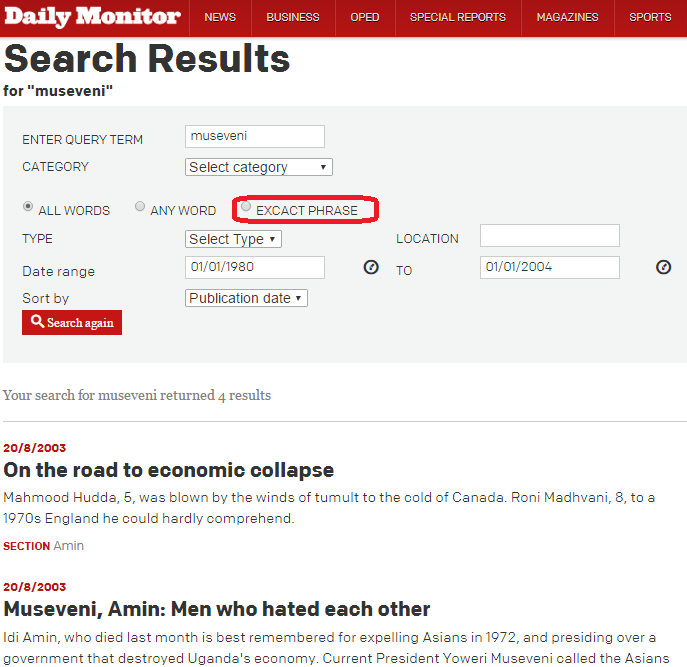 Daily Monitor gets extra points for an awesome reading font and well typed archives. The old news is as fresh as the current which is something we greatly appreciated. Sadly the archives appear to start in 2003 and the information is not as extensive as New Vision. We have also circled a typo in search query that needs to be rectified ASAP. The search engine is still as rudimentary as that of New Vision and we wonder why. 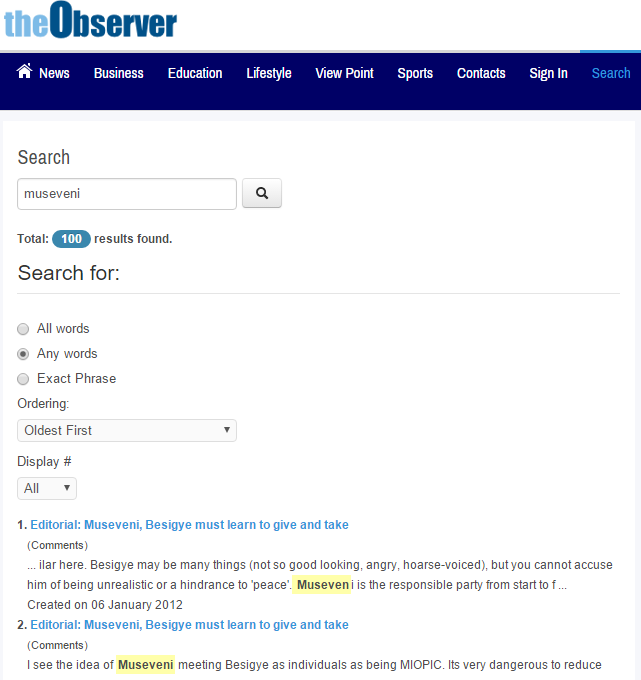 The Observer has the most user-friendly internal search engine by far of all the media houses we checked out. But also the most limited. We could not search by year or media type which the others actually can do. The Observer’s archives start from 2012 as far as we could tell and they only returned 100 results either way. We are not sure whether they delete their other entries or hide them. Let us hope that the Observer doesn’t have limited online storage and has to delete their own e-papers. 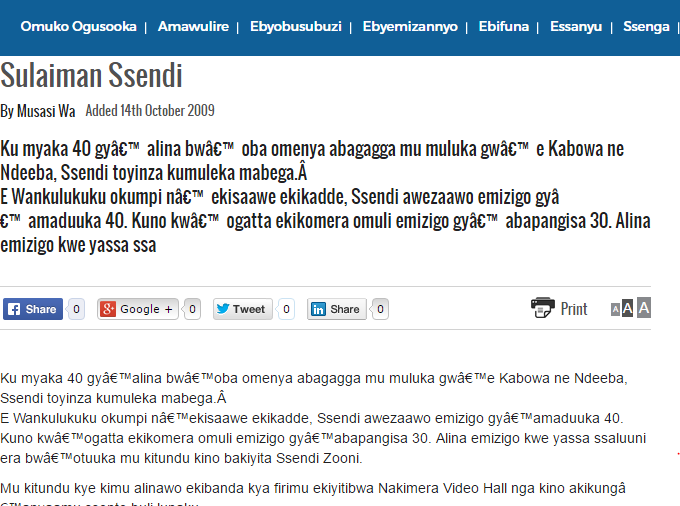 Bukedde, a sister newspaper to the New Vision suffers from the same issues that plague the Vision Group flagship. Those strange symbols appear in the archived e-papers and we also noticed that many title entries do not have corresponding stories. The entry is basically just a title without any news to warrant its inclusion on the website. Bukedde archives start from 2009.