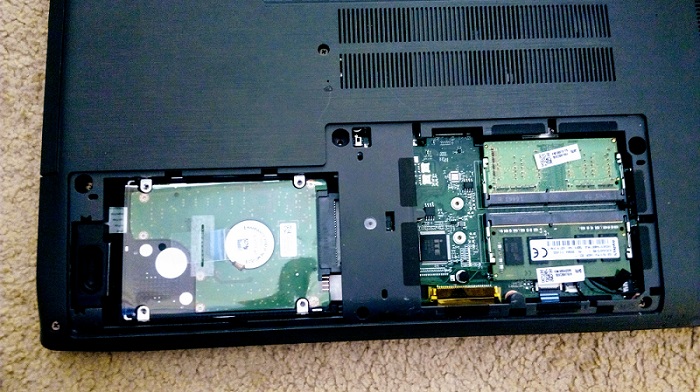 A Hybrid Drive is what you’d call a marriage of convenience. This technology walks a tight-rope between the cost-effective storage benefits of your trusty mechanical Hard Disk Drive (HDD) and the speedy NAND flash Solid State Drive (SSD). The end result is a system that caches often used data from the HDD onto the SSD for a performance boost and a faster boot time.

At the same time, the Hybrid Drive keeps production costs down even as it ships with decent storage space. In truth though, you’d be right to say that a hybrid drive is less than a full-fledged SSD. But its much more than your mechanical drive, as we are going to find out.

These are not to be confused with full-fledged SDDs (Solid State Drives). Solid State Hybrid Drives (SSHD) are an integrated merger between HDD and SSD into one single Hybrid Drive. An SSHD combines a generous amount of HHD storage and an optimal amount of SSD flash memory to speed things up, as mentioned earlier. This marriage improves boot time, application loading time and overall system responsiveness compared to your plain old hard drive. In short, you get the best of both worlds, at a fraction of the cost. Or do you?

It’s argued that the limited NAND flash memory in SSHD is too little for any significant change in performance. 8GB of solid-state cache memory might seem like a good idea at first. But the thing is…unless it’s basic browsing and a few everyday programs here and there, the flash memory will fill up fast. When this happens, the SSHD will basically have the same performance as your regular hard drive. The same applies to transferring files which won’t see any faster speeds.

One more thing, flash memory on SSHDs isn’t static. At every boot, frequently access data changes and this forces a recalibration in the SSD. Don’t use an app for a while and the initial startup time will be no different from HDD speeds. Quite the cat and mouse game, if you ask me. But even so, SSHDs are a step up from HDDs, more so, when it’s a 7200 RPM drive in the mix.

A Dual-drive Hybrid Drive is when you add a separate SSD to the same computer with an HDD installed. This duo works in concert with the help of software or manually by a user much as they will show up as two separate drives.

A computer user can manually choose to store frequently used program files and other files on the much faster SSD. When the entire operating system is installed on the SSD, you will experience faster boot times, program load times and generally a snappier performance boost. Depending on your needs, 250GB or preferably 500GB of SSD is more than enough to house the operating system along with the program files. Let’s not forget the HDD which also serves its purpose. Given its storage advantages i.e bigger storage volume, HDDs are more suitable for storing images, videos, music, e.t.c.

Linux and Mac users have the option of creating a Hybrid Drive, making use of software such as ZFS. ZFS is a file system and logical volume manager created by Sun MicroSystems.

In tech circles, the price per GB ratio (usually $/GB) is a common quantifier for storage space based on price. Being the mature relatively fail-safe technology that it is, mechanical Hard Disk Drives (HDD) score highly in the $/GB ratio compared to the newer Solid State Drives (SSD). HDDs are also insanely popular and cost-effective, on top of which, they ship by default in most computers.

As SSDs have yet to gain traction, they are relatively pricier. Let’s also not disregard the old wives tales about their mythical endurance and data retention issues. As they say, ‘perception is everything.’ For this reason, Hybrid Drives make a good first impression. Dyed-in-the-wool HDD users will get to experience the SSD performance on steroids. Even though Hybrid Drives only offer a small amount of flash memory, it still out-competes mechanical drives. This may perhaps serve as a good springboard to finally switch to full SSDs in the future.

For comparison, a 500GB HDD + 8GB NAND SSD Toshiba Solid State Hybrid Drive goes for about $50 on Amazon. For $100 you get 1TB of HDD + 8GB solid state flash memory. On the other hand, a plain HDD of 1TB goes for $50 or less. In fact, you can get a 2TB 7200rpm Seagate BarraCuda for the same $50 on Amazon. So, go figure. The venerated Samsung EVO 500GB SSD starts at $127 currently on Amazon. As you can see, price-wise, SSDs are on the higher end, while HDDs are on the lower end. Hybrid Drives are in the middle, having borrowed the aspects of both.