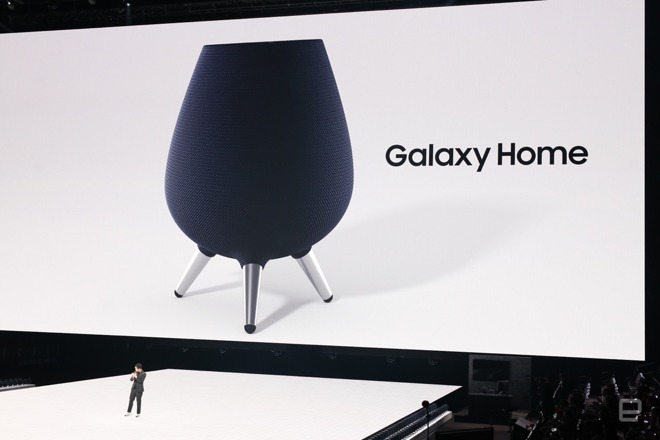 The Samsung Galaxy Unpacked 2018 was headlined by the launch of the Galaxy Note 9. Great device overall but that wasn’t the only product announced at the event. The much anticipated “Bixby Speaker” that’s meant to take on the likes of Google Home and Apple’s HomePod was unveiled in form of the Galaxy Home.

Can we talk about the design for a moment? The design of this smart speaker has elicited varied reactions from various quarters. Thing is, it looks….different. I mean the Google Home looked like an air-freshener so I suppose they had to do something equally unique. I don’t know what I feel about it but then everyone’s entitled to their own interpretation of the design.

Galaxy Home looks like some crazy vase your aunt picked up from Home Goods and filled with seashells or potpourri. @DigitalTrends #Unpacked2018 pic.twitter.com/pTztVwPby3

We do know that the smart speaker has six speakers and a subwoofer. In the unpacked event, Samsung boasted about concert-like surround sound and built-in technology from AKG and Harman to optimize sound based on where the listener is in the room. It has eight far-field microphones — one more than the Amazon Echo.

Samsung isn’t ready to fully announce the speaker yet, and it said that it’d share more at a developer conference in early November. Based on the presentation, Samsung appears to be positioning itself to compete with Apple’s HomePod, but we won’t know for sure until we see important details like price. At the moment, Apple’s Homepod is the priciest, at $349. The 2nd -generation Amazon Echo and the Google home are priced at $99 and $129 respectively. It’ll be interesting to see how Samsung prices the Galaxy Home as Bixby, the bundled digital assistant is way less capable than Amazon Alexa and Google Assistant.