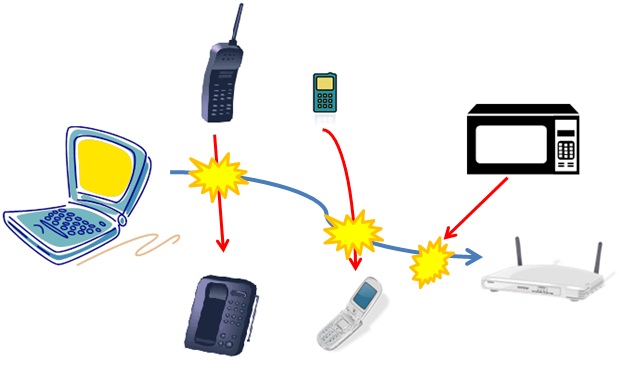 One of the most popular way of accessing the internet is through WiFi. Disturbance affecting your WiFi will inadvertently cause a fluctuation in data transfer speed. It might be particularly unnerving when you’re close to the WiFi source and can’t see any physical barrier.

You will likely have experienced Wi-Fi interference at one point or another and you might be thinking, what is wrong? While it might not be interference there is a possibility that there is an external influence  Let’s get right into it and check out the some of the common causes of WiFi interference.

Read more: Lets get this straight, WiFi is NOT the same as internet

Most of the wireless devices and toys lying around our homes operate on the wireless band as most of our WiFi broadcasting device. They tend to clutter up the WiFi spectrum leading to disturbances in the signal. You might have to switch off your wireless gadgets and toys to be able to get a better connection.

Having a lot of WiFi network within the same area where other WiFi sources are, be it hotspot or routers might cause issues with the network. You might want to change the position of your WiFi to resolve the issue or switch of the ones not in use if you can.

This might particularly be a problem if you’re using old WiFi before the advent of WiFi 6 and the perks it brings. Your Microwave operates in the same 2.4 GHz spectrum as this WiFi and it will likely give issues when in use. Move the WiFi network away from the Microwave or better still just put it off.

The motors in refrigerators are are known to sometimes cause interference as well as the fact that ice doesn’t do well with WiFi signals. So you might want put or change the position of your WiFi source far from there.

You’ve got quite a bunch of reasons your WiFi network might be experiencing interference and poorly wired satellite dishes is one of them. This might lead to signal to leak into the surrounding that ends up interfering with your WiFi network. You will have to have the whole problem fixed or just move away from there.

Discover: A list of restaurants in Kampala with free WiFi

If you don’t know, you should know that devices uses the same 2.4 GHz spectrum as some WiFi especially the old ones. You might want to switch those devices off and see how your WiFi network fares. Alternatively you can use 5GHz WiFi band supported in 802.11 ac or WiFi 5 and WiFi 6 devices.

Physical barriers are probably one of the most cause of interference known to quite a bunch of us WiFi users. However, these barriers vary from one another in terms of how strongly they interfere with your WiFi network. You’ve got materials like wood, plastic and other synthetic materials at the bottom of the list when it comes to interference. On the other hand, materials like concrete, glass, ice at the top while brick, glass, water marble are in the middle.

This lights can be the source of the issue you’ve been having with your WiFi network in the sense that they oscillate at the same frequency as your WiFi. You might want to put the device broadcasting your WiFi away from areas where you have any of those things.

There other factors that might disturb your WiFi signals but changing the position of your WiFi for a change is advised. That way you can get to avoid interference even without knowing what it is.