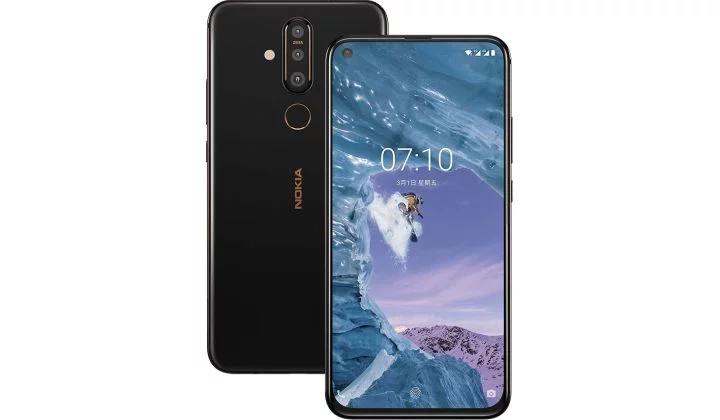 The Punch-hole display design is one trend we expect to see more of in 2019. Industry giants like Samsung, Honor and Huawei have pioneered the technology a couple of months ago on their flagship products. The latest OEM to jump on the punch-hole bandwagon — on a mid-range device by the way– is HMD Global with the newly-launched Nokia X71 Android One smartphone.

The Nokia X71 is an 8mm thick device with 2.5D glass covering on the front and rear and diamond-cut aluminium frame around the side. The device boast of a full-view 6.39-inch LCD display with slim bezels (~83.9% screen-to-body ratio) and a circular punch-hole at the top left corner. The cut-out houses the device’s 16MP f/2.0 selfie camera which is capable of capturing 1080p videos at 30 frames per second(fps).

Asides being the first smartphone from the manufacturer to sport a punch-hole in the display, the Nokia X71 is also the first-ever Nokia-branded device to have a total of three sensors lined up on the rear — although the Nokia 9 Penta-Camera flagship has more (5 cameras). Arranged in a protruding horizontal panel, the rear camera setup of the Nokia X71 consists of a main 48MP (similar to the Huawei Nova 4) ZEISS sensor with an f/1.8 aperture, a secondary 5MP f/2.4 depth sensor and lastly, an 8MP ultra wide-angle lens with a 120-degree field-of-view.

To the side of the rear camera is a dual LED flash and below it, a physical fingerprint sensor. Some features of the cameras include AI Scene Recognition, Panorama, HDR and optimized low-light photography.

Powering the Nokia X71 is a Qualcomm Snapdragon 660 system-on-chip. The SoC is paired alongside an Adreno 512 GPU and 6GB of RAM. Storage-wise, the X71 comes out-of-the-box with 128GB of ROM which can be extended by 256GB via the micro-SD card slot. At the moment, there s only one variant (6GB + 128GB) of the Nokia X71; it isn’t known if HMD Global would release other variants with different storage configurations at a later date or not.

The X71 is an Android One smartphone but will be based on the Android 9 Pie operating system. Other features of the Nokia X71 include a 3.5mm headphone jack, Bluetooth 5.0, loudspeaker with 360-degree surround sound technology, a non-removable 3,500mAh battery with support for 18W Fast Charging via Type-C USB 2.0. The device’s power button also comes with a “breathing light” which notifies the user of new messages, missed calls etc.

The Nokia X71 is available in Eclipse Black colour variant only and has a recommended retail price of $US 385.