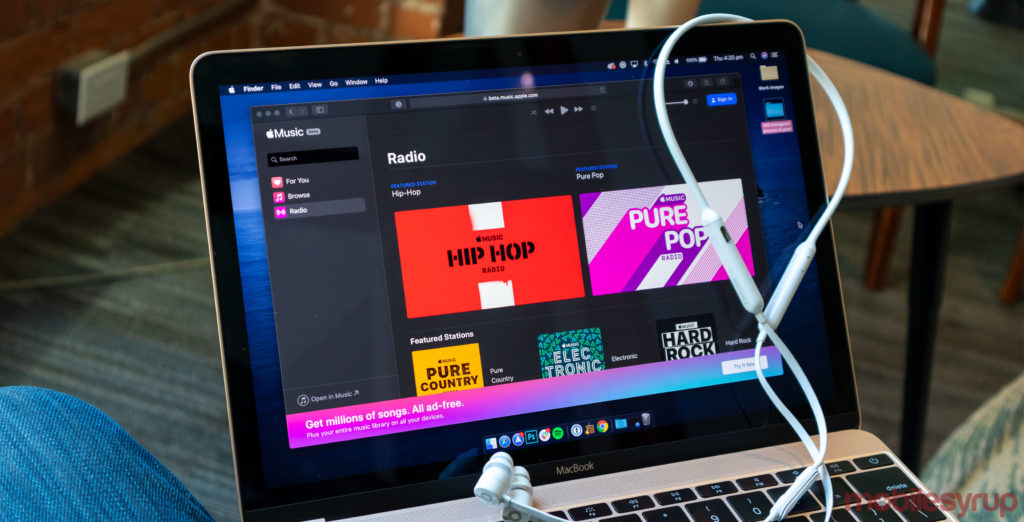 Apple’s ‘walled-garden’, often referred to by those of us in the tech scene as ‘The Ecosystem’, is really closed off one. Apple Music is Apple’s own and as such, they really push it onto Apple device users, so much so that Spotify has been crying foul.

Spotify and Deezer, the other key players in the music streaming scene, all have dedicated and well-maintained apps for Windows, Android iOS and even Mac. Apple Music has for a long time been seen as an Apple-exclusive service, but there are millions of Apple Music users that own non-Apple computers or prefer Windows or Linux. For these people, these are some of the options you have.

For some time now, Musish has been the unofficial open-source Apple Music web app. It works on the web although there is are standalone apps for Linux and Windows.

Musish is safe to use as it uses official Apple public APIs and libraries to handle authentication. The user is prompted to login directly on a new window under the Apple.com domain. Apple.com returns the user a temporary valid token to allow their browser to make requests to Apple Music data only.

In Sept 2019, Apple released a Beta version of its Apple Music Web Player. The website is similar to the ‌Apple Music‌ app on Macs, offering up dedicated “For You,” “Browse,” and Radio” sections, along with playlists, recommendations, and more.

Apple Music‌ users can sign in to ‌Apple Music‌ to access their customized content, and Apple is offering free trials for those who are new to the service.

You do need to sign up for ‌Apple Music‌ through Android, iOS, or Mac, as at the current time, there is no option to sign up on the web. Apple does plan to offer web signups in the future.

Content played on ‌Apple Music‌ for web plays right in the web player, with access to the entire ‌Apple Music‌ library on the left side of the interface.

With ‌Apple Music‌ on the web, the ‌Apple Music‌ service is accessible on any device that has a web browser, including Windows 10, Linux, and ChromeOS machines. Apple is aiming to make ‌Apple Music‌ as widely available as possible, allowing the company to better compete with other services like Spotify.

According to TechCrunch, over the course of the beta testing period, Apple will be soliciting feedback from customers as it works to streamline features and take care of bugs.

Those who want to give the new ‌Apple Music‌ web experience a try can visit beta.music.apple.com. This being a web app means that it is available in any number of platforms including Linux, Mac, Windows, Chrome OS and any other platform that supports modern browsers.

Read More: Are you a University student in Kenya? Get Apple Music for just KES 250 per Month

Well, iTunes has got to be one of the few Apple applications that don’t need an introduction. iTunes was initially focused on burning and mixing songs on the Mac, but then suggested it was too big and bloated and lost its purpose.

Love it or hate it, iTunes remains one of the ‘original’ ways to enjoy your music. I mean, back in the day you would have had to spend $0.99 to purchase a track or $9.99 to purchase a single album. With the incorporation of Apple Music to iTunes, you can now access the entire Apple Music library at just $9.99 a month. iTunes is on its last leg. But while it still lasts, it is available for Windows and Mac only. Linux lovers are out of luck for this one.

Music streaming is quickly becoming the primary way through which people access their favorite tunes. Apple’s solution is a rather elegant one today, its rocky start in 2015 notwithstanding. For music users, the more ways to access their music, the better their experience. While Apple is trying to offer its customers easy ways to access its platform, it could be better. A dedicated Windows and Linux client isn’t completely out of the picture in the near future but until then, these will do.