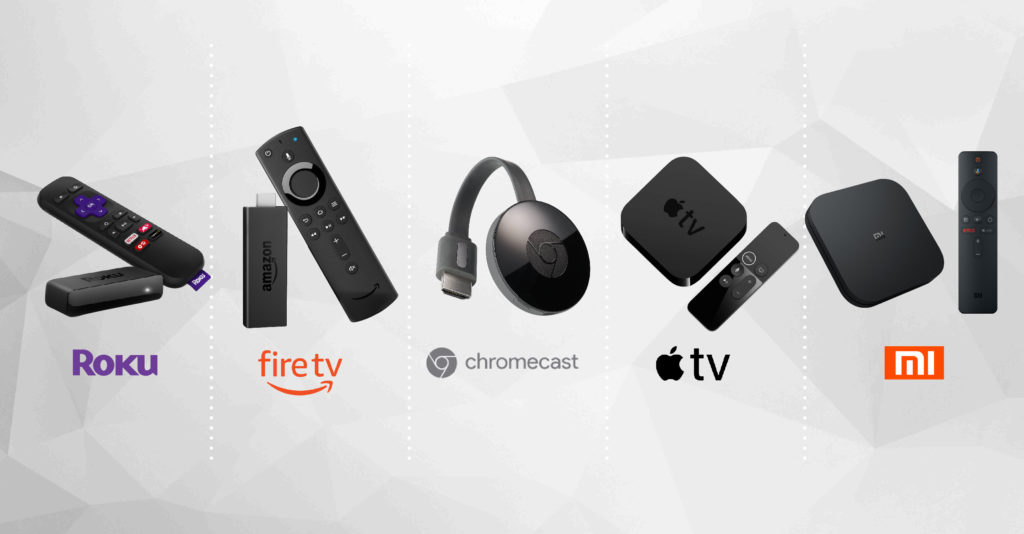 If you want to stream content online, you’ll be spoiled for choice. The easiest route for most people is simply buying a Smart TV, LG, and Samsung to be exact. But even with a smart TV, you’ll find yourself missing out on certain streaming services that aren’t natively supported by even the latest Smart TVs. Therefore, you’ll find yourself buying one or two more streaming devices to compliment your TV. Personally, I have the Amazon Fire TV Stick, Chromecast, Xiaomi Mi Box S 4K and Roku TV that I regularly hook up to the TV to stream specific services.

However, if you already have an existing TV that’s not Smart, then the fastest and cheapest way to supercharge it is with streaming device. These devices come fully loaded with their own software and hardware that instantly connect your existing TV to myriad internet streaming services.

So, whether you already have a smart TV or an ordinary HDTV, you’ll find yourself wanting to complement your home entertainment experience with an additional streaming device. And they are many. So the next question then is; which one is right for you? The task of comparing these products in one single post is daunting, but we shall try to do just that.

Now I should mention that this post is targeted towards non-U.S residents. Since I am reviewing this stuff from Uganda and in-light of content-geo restrictions, these devices work differently according to different regions.

Roku is hailed as the company that validated the market of internet set-top-boxes or media players. A spin-off of Netflix, the company has released a wide range of low-cost streaming devices since 2008. The current 2019 models include the Roku Express, Roku Premiere, Roku Streaming Stick+, Roku Ultra.

The Roku Express is the cheapest, costing only $24.99 on Amazon but supports only HD content. Roku Premiere is the second least expensive at $39.99. Unlike the Express, it sports 4K HDR Content. Roku Streaming Stick+, Roku Ultra support 4K HDR but with additional WiFi 5. The Ultra adds an Ethernet port and 2GB of RAM. You also get remotes with voice control. The Stick+ costs $49.99 while the Ultra will cost you $99.99.

In 2014, Roku starting partnering with TCL and Hisense TV vendors to ship Smart TVs with built-in Roku TV OS. The TCL line in particular has become very popular because of its budget-friendliness and features such as 4K HDR support that you would ordinary find in premium LG and Samsung TV models. The TVs are regularly updated as often as the streaming devices. Roku TVs are well-know for their support of over-the-air traditional TV through supported antenna.

Armed with a wide selection of competitive devices, the Roku platform is the most open platform-agnostic streaming platform there is. There are well over 4,500 free and paid-for channels or apps on Roku including the big ones such as Prime Video, Hulu, Netflix, HBO Now, CBS Access, Apple TV+, and free ones such as Pluto TV, Tubi, Starz. Showmax is not available on Roku.

In light of geo-restriction, readers outside of the U.S should know most of these streaming services are not available unless you use a VPN. Roku will simply not show unavailable channels in the channel store, unlike Amazon’s Fire TV Stick.

There are plenty of Android TV streaming devices, but the Mi Box S 4K stands out of the crowd for a number of reasons; its slick user interface, impressive specs sheet, performance, and sweet price point. The Mi Box S is a streaming device launched in 2018 by Xiaomi, the Chinese company well known for producing premium products at affordable prices.

Android TV is a Smart TV platform developed and maintained by Google. Android TV runs on select Smart TVs such as those from Sony, Sharp, Philips, Hisense, Xiaomi, and streaming devices or set-top-Boxes like the Nvidia Shield, Tivo 4K stream, Skystream Pro and of course the Mi Box S 4K.

Originally made for the Chinese market, the Mi Box S also has a global version. The Mi Box S sports a Cortex-A53 Quad-core processor, Mali-450 GPU, 2GB DDR3 RAM and 8/32GB eMMC storage. For connectivity, it comes with WiFi 5 and Bluetooth 4.1 wireless options, HDMI, Audio AUX and USB ports. This box ships with built-in Google Chromecast too. Additionally the Mi Box S ships with a remote that comes with a dedicated Google Assistant hot button. With this, you can control, search and navigate your TV with only voice commands powered by the Smart AI Assistant.

The User Interface is based on Google’s official Android TV official theme. It’s slick and modern. Apps can be downloaded from Google’s Play Store. Most of the popular titles are available: Netflix, Showmax, Prime Video, Youtube, HBO Now, CBS All Access, Hulu, etc. Apple TV is not available on Android TV. You can side-load unsupported Apps from 3rd-party App stores in similar way you would on your Android smartphone. You can also change the official theme to another by third-parties. Generally, Android TV is more customizable or hackable than most of the other platforms.

Other than content streaming services, you can play a wide range of games supported on Android using the Mi Box S. This is one aspect that Android TV boxes beat the other competitors. With a Bluetooth keyboard or gamepad that connects to the Mi Box S, you can enjoy games on your big screen TV.

The Google Chromecast is kind of an outlier in streaming devices. First, it doesn’t have a dedicated remote like other streaming devices. Also, it doesn’t have a user interface with all the streaming apps or channels or services. Instead, the Chromecast must be used in conjunction with your smartphone or tablet, or PC. It’s simply a way of casting or screen mirroring content from supported apps on your smartphone/tablet/PC to the TV.

Both Android and iOS devices are supported. Despite these constraints, Google’s streaming device is extremely popular having shipped over 30 million units since launch. I personally have one at home.

Read more: Chromecast Review: Is it Still Worth It in 2020

According to Google, over 20,000 Google Cast–ready apps are available. Virtually every popular streaming service is supported by Chromecast. Coupled with Google Assistant, you can control your TV through voice commands.

The device comes in two versions; the Standard Chromecast (3rd generation 2018) and Chromecast Ultra (2016). The Chromecast 3rd gen supports Full HD video at 1080p @ 60fps, comes with an HDMI interface for connecting to your HDTV and WiFi 5 for connecting to the internet. You can also connect to the internet through Ethernet but only through an optional USB Ethernet adapter bought separately. It has a Micro-USB which is used to power the device through USB port of your TV or USB power adapter.

The Chromecast Ultra, on the other hand, supports 4K Ultra HD with High Dynamic Range (HDR10, Dolby Vision) along with other features of the Chromecast. Early this month, Google is reported to be launching an Android TV powered dongle fully supported with a dedicated remote having Google Assistant support.

The Chromecast retails at $35 which rivals the $24 Roku Express while the Ultra is at $69 on Amazon. And if you live in Uganda, you can get one from Odukar store at Ugx 220,000.

Related post: Beginner’s Guide to Amazon Prime Video (For Uganda, Kenya, and Nigeria): It is worth it?

Amazon Prime Video members get unlimited access to Prime Video, including original programs such as The Grand Tour, Man in the High Castle, and American Gods. All this is tightly integrated into the Fire TV devices. Amazon has been criticized for fronting its own services at the expense of its competitors. So, if you don’t mind seeing Amazon Ads promoting their own products once in a while, then you probably want to consider the Fire TV.

The Fire TV devices run on Fire OS, a heavily-tweaked version of Android run and maintained by Amazon. It has an App store with over 4,000 Apps and games according to Amazon. I’ve used it, but I was not happy with it. In fact, I don’t recommend it if you live outside of the U.S as Amazon’s own services are not even supported unlike you go around geo-restriction with a VPN.

Last but not least on our list is Apple TV. If you have already invested alot in the Apple ecosystem, that is, you own an iPhone, iPad and a Macbook, then by all means, adding an Apple TV is the natural choice. Apple has already done the heavy lifting for you, so expect everything to work quite smoothly unlike the other products.

Siri, Apple’s Smart assistant is now integrated in 4th generation Apple TV. With this, you can search and use voice dictation in text fields, including usernames and passwords. However, reviews indicate Siri is following behind Google’s Assistant and Amazon’s Alexa.

Mirror casting is supported via AirPlay which lets users stream or mirror content wirelessly from an iOS device or Mac to the TV. So you can share photos, videos or audio from their iPhone, iPad, or Mac to the Apple TV. This is similar to Google’s Chromecast.

The Apple TV 4K is powered by A10X Fusion chip and has 32/64GB storage. For connectivity, it has HDMI 2.0 for connecting to your HDTV, Gigabit Ethernet for internet or WiFi 5, Bluetooth 5.0 for connecting to additional peripherals and IR receiver. It’s powered by your wall socket power. The device is controlled through Apple TV remote which ships together with the streaming box.

The Nvidia Shield is arguably the best Android TV box interms of performance. It delivers amazing gaming and streaming experience thanks to new Nvidia Tegra X1+ chip, 3GB of RAM and 16GB of storage. It has two USB 3.0 ports, and supports Gigabit Ethernet, dual-band AC WiFi and the latest Bluetooth 5.0 standard. If you are looking for serious gaming from and Android TV box, then we highly recommend the Nvidia Shield Pro. For this, you’ll have to pay $199 on Amazon.

I’ve provided a cursory look at streaming devices in 2020. This post is by no means comprehensive, but it’s meant as a guide to help you quickly skim through the various major options in the market. I used most but not all the devices listed.

Summarily based on personal opinion, I would rank Roku devices first. It’s open and most platform-neutral streaming device. Starting at just $24, Rokus are also budget friendly.

Coming in 2nd place is the Google Chromecast. With over 20,000 Google Cast–ready apps, you can virtually stream anything online with this $35 streaming device. The major drawback being lack of a remote and User interface which might be slightly harder for non-techie people.

Taking 3rd place would be the Xiaomi’s much-acclaimed Mi Box S. High customization of Android TV and a wide number of games in the Play store makes this device great for super-geeks and gamers. The $55 price tag is also quite approachable.

Taking 4th place would be either Fire TV Stick or Apple TV. If you are an Apple Fanboy, then the choice is a no-brainer. But if you aren’t, then Fire TV Stick might be a good choice — but only if you live in the U.S; I have had issues with my Fire TV Stick here in Uganda.