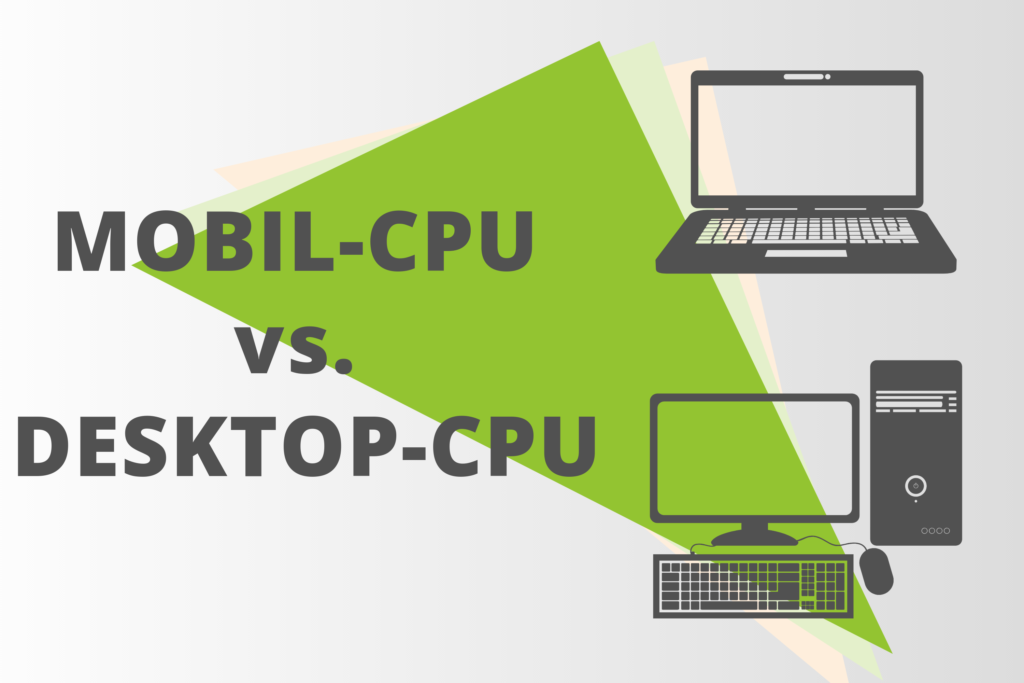 There’s something universally appealing about the thought of a powerful laptop. All the power crammed into a single portable device that you can carry with you anywhere you go. Who wouldn’t like the sound of that? But the reality of the situation is strikingly different.

The truth is laptops simply cannot match desktop PCs in terms of performance. One of the reasons for this is their hardware. At first glance, it may appear as though laptops utilize the same pieces of hardware that desktop PCs do. But this isn’t the case even if the names match up.

For example, a laptop’s memory modules are physically smaller. You couldn’t take them out and plug them into your desktop PC’s motherboard. They just wouldn’t fit. The same goes for Mobile processors—the CPUs that laptops use are known as mobile CPUs.

Physical compatibility with desktop motherboards isn’t the only difference between mobile and desktop CPUs. We’ll explain everything you need to know about desktop and mobile CPUs.

How Are Mobile CPUs Different?

The differences between mobile CPUs and desktop CPUs are not arbitrary. They all stem from the fact that desktop CPUs simply don’t offer what a laptop needs. Laptops are meant to be portable hence they value portability over raw power. This is why the two most important factors for a mobile CPU are power efficiency and cooling.

Laptops are battery-powered devices that need to perform well, even when they aren’t connected to a power source. Hence they need to prioritize power efficiency over raw power. But it’s not as if desktop CPUs throw power efficiency at the wayside, they just lean more towards raw power.

With laptops, this simply isn’t an option. It can’t be done without burning through the battery like paper. Even if the battery were somehow inexhaustible, laptops would still opt for the power efficiency route due to cooling concerns.

Cramming an entire PC’s worth of hardware into a relatively small chassis is hard enough as it is, but manufacturers also need to worry about airflow. Heat dissipation is a much slower process inside a cramped laptop chassis. Here, multiple large fans and hefty heatsinks are a luxury that cant be afforded.

Thus mobile CPUs need to generate less heat and this, in turn, limits their performance. So with all that in mind, you can expect mobile CPUs to have significantly lower clock speeds and Thermal Design Power (TDP) than desktop CPUs. What’s more? They often feature fewer cores as well. This is all in an effort to draw less power and generate less heat.

You should also note that not all mobile CPUs are the same. More powerful models do exist. Some even come close to the desktop CPUs in terms of performance. For example, Intel mobile CPUs with the H designation are all high-performance models.

That is as opposed to U and Y designations which are used for low power and ultra-low-power models respectively. In any case, unless you know a certain mobile CPU is a high-performance model. You shouldn’t expect too much out of it.

Also Read: What Is CPU Cache and How Does It Work

With all that in mind, should you consider buying a powerful laptop instead of a desktop? The answer can be both Yes and No, depending on what you prioritize. The biggest strength of laptops is their portability. If you don’t care much for the portability aspect, then no, there’s really no reason to get a laptop over a desktop PC.

Not only do desktop PCs offer better performance than laptops, but they also cost less. But if portability is the big deal for you, then you can rest easy knowing that a powerful laptop is completely viable. It’s more expensive than a desktop but it is viable if you can afford it.

We hope you found this post helpful. Share any questions you have in the comments section below.

Also Read: The difference between CPU and Cores