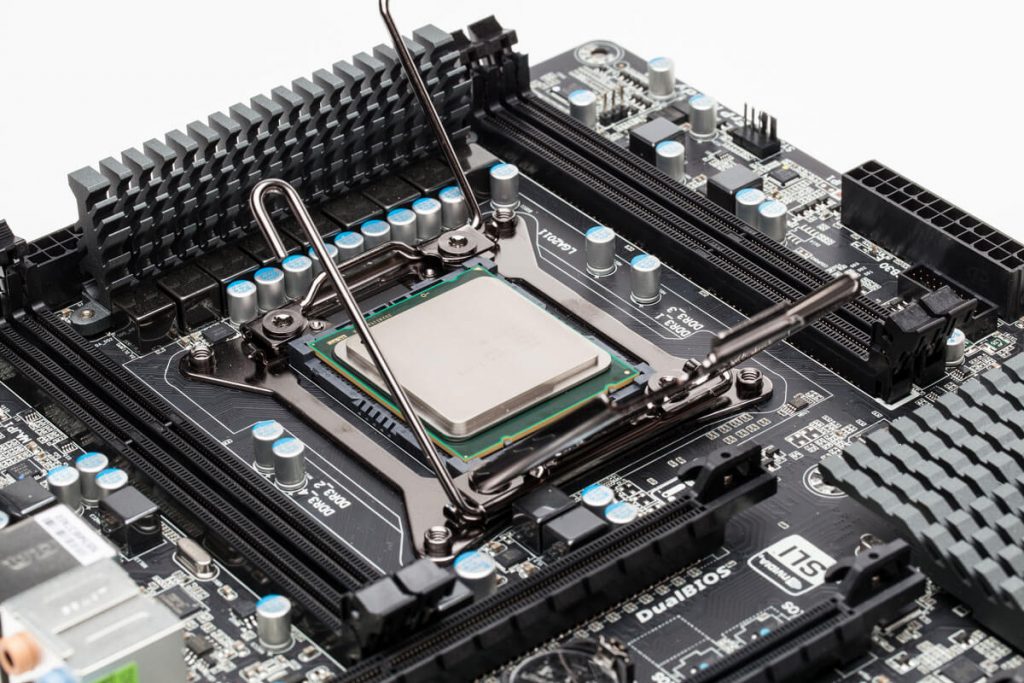 A CPU (Central Processing Unit) or Processor is often referred to as the brain of the computer. If that is the case, the Cores would then be the left brain and the right brain (for dual-core processors) or multiple brain partitions even.

One Core can function without the other and both can function simultaneously as is normally the case. The same cannot be said of the human brain, unfortunately. As you can tell from this analogy, the Core is not the entirety of the CPU but rather simply a slice of the pizza.

Something else to talk about is Intel’s Core naming scheme which introduced Core i3, Core i5, Core i7 and as of recently Core i9. This naming scheme replaced Intel Pentium (e.g. I, II, III and IV) and shouldn’t be confused with the actual Core which is more related to the CPU. We will get to this in a bit, or you can scroll below to read all about it if you wish.

The CPU is the ‘Einstein’ of your PC, that big brain. Our Einstein makes use of a system the good team here at Dignited have dubbed FEDEX – Fetch, Decode and Execute. The route FEDEX takes on Einstein’s behest starts with fetching data input.  Einstein then makes light work of these instructions and decodes them before passing them along for their immediate execution. To further break this down, the CPU is composed of three core components:

Most modern CPUs are in truth microprocessors. Microprocessors are entire CPUs housed on a single Integrated Circuit (IC). Secondly, some, although not all CPUs pack an integrated GPU (Graphics Processing Unit), Imput/Output and memory controllers on board.

Once we move into smartphone and Internet of Things (IoT) territory, things get more interesting. Systems on a chip (SoC) contain a CPU, RAM, ROM, I/O (Input/Output) ports, RF (Radio Frequency), along with this and that on the Integrated Circuit which makes up a full-fledged PC.

Related: What is a SoC (System on a Chip) and how is it different from the CPU?

What is a Core?

A core is the most basic computational/processing unit of a CPU capable of executing one instruction at a time. It consists of its own Arithmetic Logic Unit, Control Unit and set of registers. Where early CPUs consisted of only a single core, current CPUs can have several cores. You should note that the CPU itself remains a single physical computational unit which rather multiple cores.

Multi-core processors can be dual-core (2 CPUs), quad-core (4 CPUs) and so on and so forth and these execute parallel instructions at the same time given that each core is its own CPU. Hyperthreading further doubles the number of CPUs (called logical processors this time) for PCs that support it.

The core can be best described as the nervous system (the clock) or the road network of the PC with the brain (CPU) at the top. This nervous system or clock determines how fast our Einstein can ‘think’ which involves the speed at which program instructions are FEDEXed (Fetch, Decode, Execute). This clock is measured in Gigahertz, hence, for instance, a 2.5GHz PC ‘thinks’ 2.5 billion times per second.

In order for the core to be more efficient doing its job for FEDEX, it has two means of transport AKA cache. L1 cache is akin to a bicycle which is fastest and weaves through the road network like a bread through butter. L1 cache is the closest and smallest but also the fasted. L2 cache is a delivery van which is bigger but not as fast as L1 cache. L1 and L2 cache serve the purpose of storing data to and from RAM to speed up access.

I am going to say this three times: don’t confuse this numbering scheme with an actual core as they are fundamentally two separate things. The truth of the matter is that this numbering scheme is some next level nonsense which Intel came up with. Internally, Core i3, Core i5, Core i7 and Core i9 help Intel to explain how much horsepower a PC has.

Keep in mind that when you’re purchasing a PC, the devil is always in the details, as they say. You might find that a Core i3 and a Core i9 can both be a dual core or a quad core.

The pecking order is as follows: a Core i3 is reserved for budget PCs for light usage whereas Core i5 is reserved for midrange PCs. It’s a healthy balance between performance and price. A Core i7 and Core i9 are top of the range. This is the territory for professionals and enthusiasts who require tremendous performance and have the mullah to throw at it.

The difference between a CPU vs Cores is quite blurry for the uninitiated, hence the analogy galore up there. Anyway, long story short, a CPU performs basic arithmetic, logical, control and input/output operations. The core for its part does the actual legwork here, which includes fetch, decode and execute.

Multicore CPUs are definitely faster than single core CPUs. But there’s a catch. Most programs are executed by following step by step instructions on one single core. In this case, the other cores would lie idle which won’t be very helpful in terms of speed and efficiency.