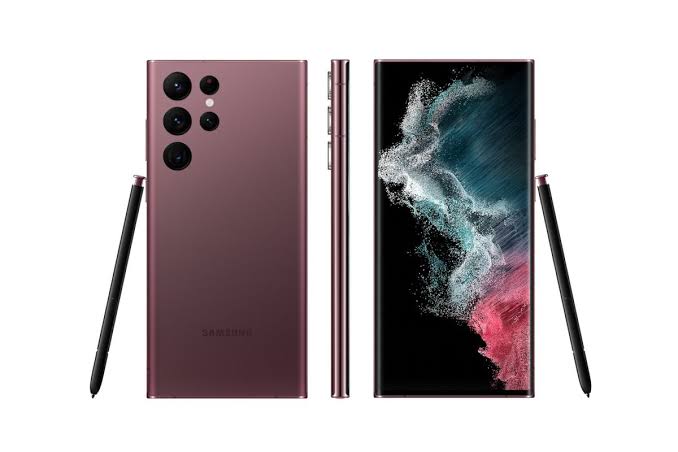 A Stand Out Design

To begin with, there’s the stylus pen – something that wasn’t present on its predecessor, the Galaxy S21 Ultra – and just like on the Note series, it slots into the bottom edge of the phone. Furthermore, the contour cut camera present on the Galaxy S21 Ultra and on the new Galaxy S22 and S22+ is missing on new Galaxy S22 Ultra. Samsung, instead, have introduced stand alone cameras poping out of the metal rear of the phone. Here is a warning though: This smartphone is quite large; It is a 6.8 inch edge Quad HD+ Dynamic AMOLED 2X device with a dimensions of 77.9 x 163.3 x 8.9mm. This means it might not be a very comfortable smartphone to use if you’ve got small hands. You’ve also got four colors to choose from; Phantom Black, Phantom White, Burgundy and Green.

Looking at the spec sheet, the camera set up of the new Galaxy S22 Ultra isn’t different from what’s on its predecessor – the Galaxy S21 Ultra. It features a quadruple-lens rear camera setup of 108-megapixel main sensor, a 12-megapixel ultra-wide camera, as well as two 10-megapixel telephoto sensors. However, the highlight of this segment of this device is a feature Samsung calls Advanced Nightography. According to Samsung, this feature uses its 2.4um pixel sensor to capture better images at night, framing multiple subjects and better portrait photography even in low light (at night). It is supported by a 40-megapixel front-facing camera.