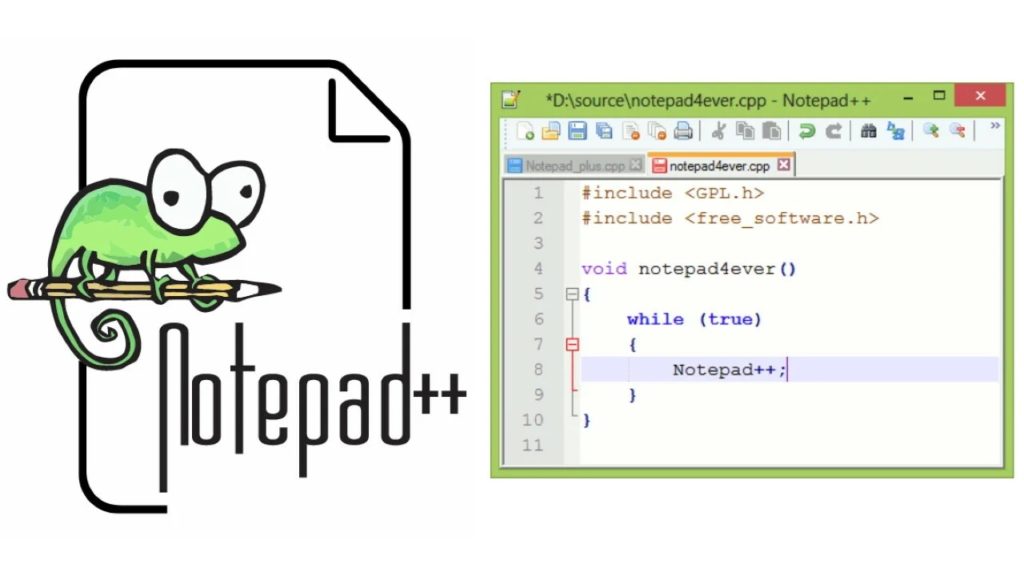 Both Notepad and Notepad++ are Windows-based text editors that are commonly used for writing and editing plain text files. As much as they are Windows-based, only Notepad comes pre-installed in Windows operating systems. If you need to use the advanced++ version you have to download and install it yourself. Basically, both applications are simple lightweight programs that offer basic text editing capabilities.

Just from their naming, the addition of ++ might be a clear indication that one program is a superior version of the other. And you would not be wrong to think that. They however have some key differences that make one more suitable for your needs than the other. Thus in this post, we will focus on highlighting some of the key differences between the two versions. Let’s get right into it.

One of the main differences between these two programs is the supported file types. Notepad is a basic text editor that only supports plain text files. This means it cannot be used to edit files that contain rich formatting such as bold, italics, and underline. In contrast, the ++ version is a more advanced text editor that supports a wide range of file types. Including HTML, XML, CSS, JavaScript, and many others. This makes Notepad++ a more versatile program that can be used for a wider range of purposes. Some of such purposes are editing web pages and editing programming code.

Another key difference between these two applications is the user interface. Notepad has a very simple and straightforward interface. Notepad’s interface has a basic toolbar that includes buttons for common text editing functions such as cut, copy, and paste. In contrast, the ++ version has a more complex interface with a wider range of features and options. It includes a tabbed interface that allows you to work on multiple files at the same time. Notepad++ interface also has a wide range of tools and plugins that can be used to customize the program to suit your specific needs.

As earlier highlighted, the ++ version offers many more advanced features than the basic program. For example, it includes a feature called “Syntax Highlighting”. This feature automatically colors different parts of your text based on their types, such as keywords, strings, and comments. This makes it easier to read and understand your code. This will help you to identify errors. Notepad++ also includes a “Macro” feature that allows you to record and play back sequences of actions. This can save you a lot of time and effort when editing large or repetitive files.

Another major advantage of Notepad++ is its support for plugins which allows users to download and install additional plugins that can extend the program’s capabilities. These add new features and functionality. For example, the feature we discussed above about syntax highlighting can be added through a plugin but for many different programming languages. Through the plugins menu, you can search, install, update or remove plugins. The complete list of all available plugins can be found on GitHub.

5. Notepad++ is a more Lightweight Program

Despite the fact that Notepad++ is the more advanced program, it is also generally considered to be faster and more lightweight. This is because the ++ version is built on top of the Scintilla text editing component, which is optimized for speed and performance. In contrast, the basic application is built on the older and less efficient Rich Text Edit control.

Notepad++ comes with 7 color schemes and 23 themes that you can choose from while the basic application does not offer any theme customization. Additionally, the ++ version allows you to change the background and text colors. They both however share the same font formatting scheme where you can choose from hundreds of fonts.

A key difference is that the basic program has no limit on font size while the ++ version restricts you to between 5 and 28 predefined font sizes. Another customizable feature that is available on Notepad++ and not on the basic version is dark mode. By default, the ++ version opens on light mode but you can switch to dark mode using the preferences menu.

Which is best for you?

Overall, the choice between these two programs will depend on your specific needs. For those who only need a basic text editor for simple tasks, Notepad may be the better choice. However, for users who need a more powerful and versatile program, the ++ version will be the better option. Bottom line is that Notepad++ is a highly advanced version with the functionality needed by web designers, IT professionals, and programmers. All that wile maintaining the simplicity of the basic application.

Have you been using either of these programs for some time? Kindly let us know what you like more about either of them through the comments section below.