WhatsApp has started rolling out a document sharing option for those who have recently updated the app on their Android and iOS smartphones. Other platforms have not yet received this option by press time. Document sharing so far only supports the PDF file format but we believe other formats will be supported in due course. WhatsApp has yet to come out with an official statement as to the new changes.

You haven’t yet seen this new feature? We suggest you update your WhatsApp first. In your chat window, click on the share icon (the clip symbol) on the top right to show more options. To accommodate the new document share option, camera has been merged with video share so as to retain the 6 icons present. Please refer to the image below: 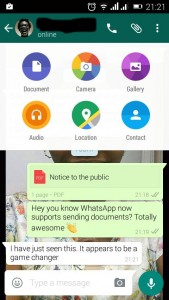 WhatsApp recently celebrated its 7th birthday soon after reaching the 1 billion mark in active users. A number of sweeping changes have been announced such as the abandonment of the Nokia Symbian, Blackberry and old model Android platforms at the end of the year 2016.

We now await WhatsApp’s  official statement and completion of the rollout to iron out the kinks in this new feature bringing smiles to our faces. It should be noted that rival Instant Messenger app Telegram supports file sharing of any format including PDF and DOC which we believe WhatsApp will be able to support very soon.

Talking of new features, these are some of the improvements we would love Whatsapp to incorporate:

WhatsApp has for years retained the same look and functionality despite users requesting for more improvements. The first major addition was the call feature which was a big hit with users. With 1 billion users under their belt, the Facebook-owned Instant Messenger giant doesn’t have any serious rival so they can be selective in the services they want to incorporate in their app. Still we appreciate the direction this is taking.