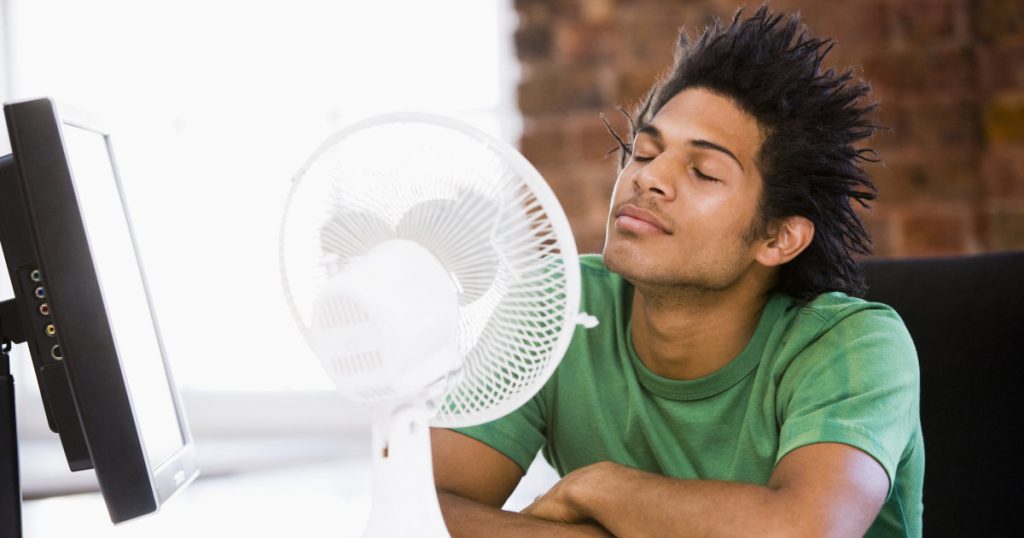 Computers in good working condition produce a low purring sound, not unlike that of a content self-absorbed pussycat. This sound comes from the vibrations of the spinning disk (HDD) and the computer fan. PCs in active use also produce a continuous blast of warm air which exits the machine from the air vents like you would get from a hair dryer on low power.

Once in a while though, the sound of the fan can get alarmingly noisy. One would think you got a helicopter residing in your computer. There are various reasons why your computer fan makes all that noise and while not exhaustive, here are some of the reasons:

Particular computer programs, and the operating system itself can drive CPU usage through the roof. If not malfunctioning, some of these programs e.g. the Adobe Suite might be taxing the CPU beyond its capabilities and this heats up the hardware more than usual.

As you might notice, at times the CPU usage can even hit 100%. When this happens, the fan goes in hyperdrive and the calming humming sound of the PC becomes a V8 engine revving nonstop. Your PC may freeze and become unresponsive or shut down altogether.

Pro tip: Before this happens, go to Task Manager (Search for it of Press Ctrl + Shift + Esc). Under processes, you will see the main culprit. Right click on the program to close it. You could also wait for the program to finish running after which it will revert back to its normal state. The fan will stop automatically.

Laptops are designed with gills – those air vents usually at the side and underneath the machine. These gills allow the fan to draw in fresh air to cool the CPU and also draw out hot air (normally at the side). However, it’s a human folly not to understand this simple design. Laptop users often place their machines on surfaces that block these air vents.

When this happens, the fan is obstructed from doing its job, which is to keep the hardware cool. As such, it works harder and draws more power, inadvertently making that annoying noise.

Pro tip: Make sure you are not obstructing your laptop’s air vents under any circumstance. You will heat up your PC, burn through your battery, and even cause it to shut down when you do that.

Much as we would like to think otherwise, the air around us is full of dust particles. Also, as stated earlier, placing laptops on uneven surfaces (beds are the main culprit here) leads to the fan picking up all manner of gunk and lint from those comforters. This combination at some point effectively blocks the air vents which consequently makes the fan run at less than optimum condition.

Pro tip: If you have the technical know-how you can unscrew the back cover to pry your laptop open in order to clean out the dust and the gunk. If not, the best option would be to blow out the dust at an angle so as not to shove it deeper in. Make sure your laptop is switched off before you attempt this procedure.

Alternatively, it’s advisable to take your laptop to a certified technician.

There are 4 Power modes in Windows 10 i.e Battery Saver, Better Battery, Better Performance and Best Performance. These Power modes dictate how much juice your CPU should pump into doing certain tasks.

The first two Power modes throttle performance a little bit in order to save your battery. Best Performance runs your PC at full throttle and what this does is that it prompts the CPU to work harder than it ought to which forces the fan to kick in furiously.

Imagine a car running in gear one throughout. You’ll burn through your fuel and wear out your engine and your tyres within no time. A little power here and there is well and good and not all the time, no.

Pro tip: Adjust your Power mode (click on the battery icon on the task bar) to Better Battery or Better Performance depending on your CPU needs. Once the CPU is given the green light, it will hard work and force the fan to cool it down, hence that noisy sound.

At times, the reason behind a noisy fan could boil down to old hardware. The fan in question might have broken blades or some other technical issue making it inefficient and noisy.

Pro tip: Our advice would be to replace the fan altogether. Preferably with the help of a technician who will advise accordingly. Unless you know your business in which case, have at it.