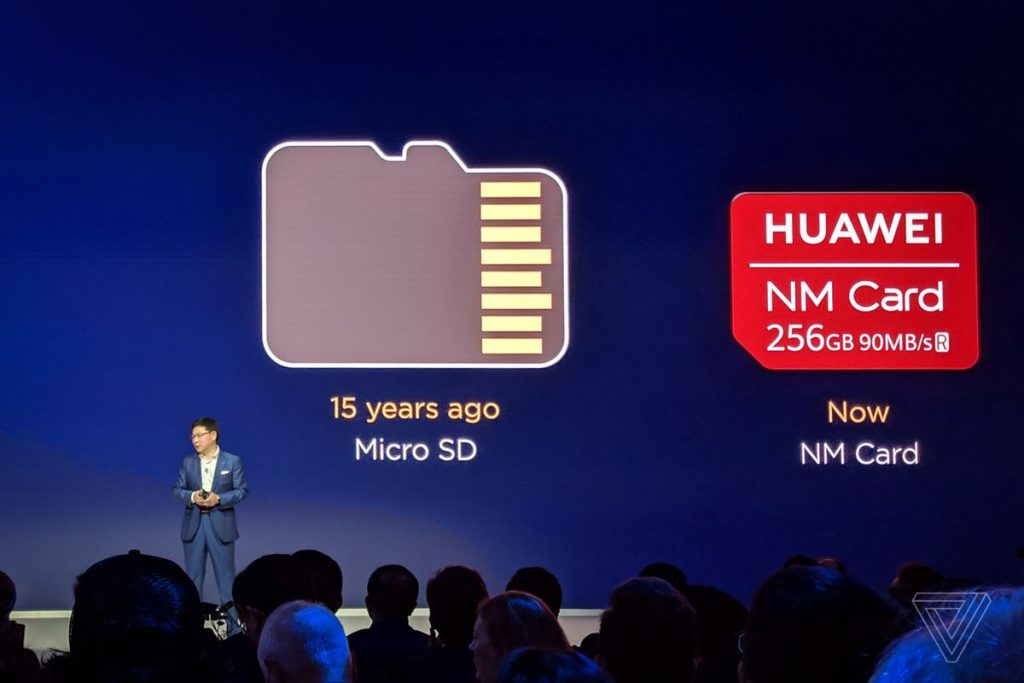 Looking away from the stunning beauty, the large screen sizes, the impressive display technologies, the fantastic Leica triple rear cameras, the SuperCharge tech, the Reverse Wireless technology and all other crispy new technologies found on the gigantic Huawei Mate 20 phones, the Huawei NM card is a new tech that changes the dynamics of the memory card standard.

For the first time in a long time, we’re seeing a phone that changes the MicroSD card standard used on smartphones. As a matter of fact, Huawei hasn’t divulged too much information about the NM card but there are enough details to curb your curiosity. In this stead, we’ll be looking at what we’ve been able to gather about this new device.

The manufacturer of the new NM card is Toshiba. Huawei declared Toshiba as the sole producer of the innovative tech at a major London event last week. Huawei collaborated with Toshiba to specially make NM cards for the Mate 20 smartphones.

The NM card has the shape of a Nano SIM. In fact, it fits perfectly into the nano-SIM slot of a hybrid dual SIM slot.

If there’s one important thing to note, it’s the fact that the NM card works on only hybrid dual SIM slots. Also, the Chinese manufacturer asserted that the NM cards would be 45% lesser than a standard MicroSD card.

A standard NM card can increase a phone’s internal memory to 256GB. Huawei pointed this out by declaring that the Huawei Mate 20 phones’ storages can expand to such limit.

Given the current information, the NM card ranges between 128GB – 256GB. On the other hand, traditional MicroSD cards already have iterations that cap at 512GB. As more details about the card are exposed, there are likely lower and larger iterations.

Here’s where the downside comes in: The NM cards are not available at the moment. The Huawei Mate 20 phones are expected to launch next week or thereabouts, but neither Huawei nor Toshiba has given any details about the card’s market availability.

It could take longer than normal for these new cards to become available for purchase in the market. That said, their prices could also be higher than the MicroSD counterparts.

Importantly, Huawei is the only OEM to support NM cards. Subsequentially, only Huawei Mate 20 smartphones sport this new memory card standard. No other OEM boasts of this technology but time will tell if the tech can go viral.

Now down to you avid readers, what do you think about the Huawei NM cards?