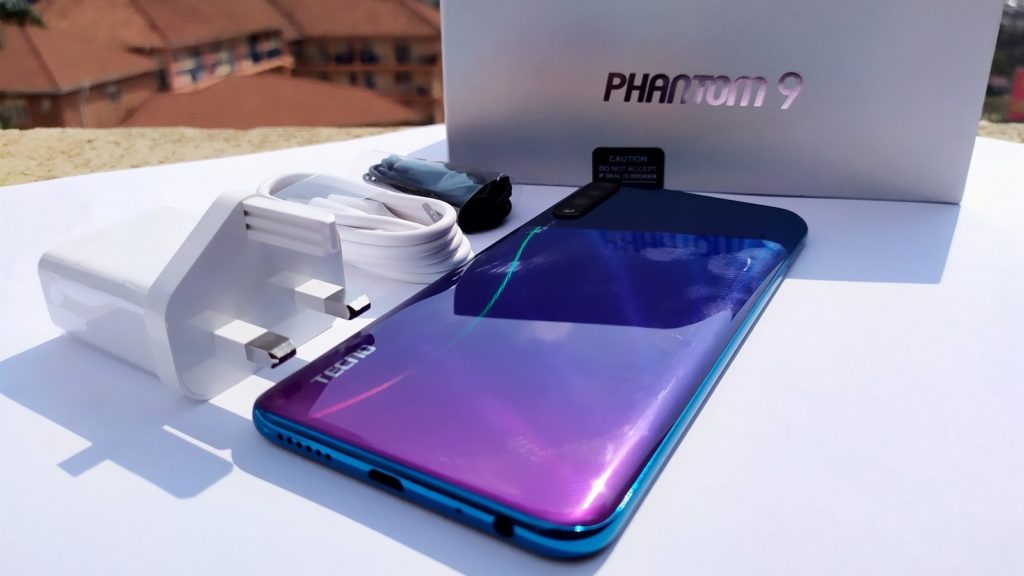 The TECNO Phantom 9 is simply THE phone to buy. And we mean THE phone brings a ton of flagship features without pushing the budget parameters overboard. We are talking a less than UGX 1 million phone that has the moves of a Kungfu master.

If you are out looking for a device that checks many boxes, including those very diverse ones of performance, design and yes, even price, the Phantom 9 is in a zone of one. Here are 8 reasons why you should buy the TECNO Phantom 9.

The looks of the TECNO Phantom 9 are enough to get you dazzled even before switching on the device. The Phantom 9 comes in Lapland Aurora colour which makes it easily the most distinct and yet stylish handset launched in Uganda. This is a head-turning phone because of its stunning style quotient.

An AMOLED screen to stun

The front of the TECNO Phantom 9 is no plain Jane. With bezels pushed out of the way, it is dominated by a bright 6.4 AMOLED display, uncluttered by buttons. It has a screen-to-body ratio of 84% percent, giving you an insane amount of viewing space.

TECNO has also used a dot notch that doesn’t interrupt the viewing experience. This coupled with the Full HD+ display makes the Phantom 9 the Husain Bolt of media consumption in the below UGX 1 Million race.

Most phones with a waterdrop notch surrendered an important part of the camera especially for night selfies, front-facing flashlight. However, TECNO Phantom 9 is not most phones!  It is the first device to break through that limitation. The device has dual-front facing LED flashlights that illuminated dark environments for great selfies.

A fingerprint scanner under the display

TECNO stepped up and walked away from the boring rear-mounted fingerprint scanner to put the biometric unlocking method under the display. The scanner on the TECNO Phantom 9 is actually in the display itself. It is time to give your index finger a break and let the thumbs do the work. All you need to do is press down your finger on the green fingerprint icon in the mid-bottom area of the screen (the area lights up!) to log into your device. The animation is straight outta a sci-fi movie. How cool is that then? And how many phones below UGX 1 million let you do that?

While other phone makers are in the megapixel count race ratcheting up megapixels with each device, the TECNO Phantom 9 sticks to what cameras are meant to do – it just takes good pictures. The 16MP, 8MP, and 2MP rear camera combination deliver stunning colours and details in various light conditions.

Making this magic happen is the AI that There is also AI that covers 8 independent scenes.  From fixing backlighting, brightening skin tone and night scene to smart face recognition, making sky is bluer and an anti-shake blessing that improves the film rate. This added to macro photography makes for the perfect camera setup for the price.

TECNO has a tradition of delivering fantastic selfie photography and the Phantom is no stranger to this. The 32-megapixel front-facing camera on the TECNO Phantom 9 takes stunning selfies using AI technology for beautification. The images are social media ready and you won’t need ad-infested third-party apps to add filters to selfies before you share them.

The most comfortable grip

With a screen this large, you might be unsure if you can wield the TECNO Phantom 9 without tiring your hands. Don’t be scared, the Phantom 9 smaller than the Phantom 8. The phone is curved at 30° and 40° that makes it fit in your hands with ease.

Some seriously good specs on the TECNO Phantom 9

The new Phantom is no dumb blonde as it brings forth some very impressive hardware. The full HD+ AMOLED display gives it diplomat status in the below UGX 1,000,000 bracket. In charge of running things is the Octa-core Helio P35 assisted by a huge 6 GB RAM and 128 GB of storage.  (which is expandable via a microSD card up to 1TB). There is a modest 3500mAh battery to power things up for the entire. With   4G and great software too, this is a spec sheet that stands alongside the best in the business.