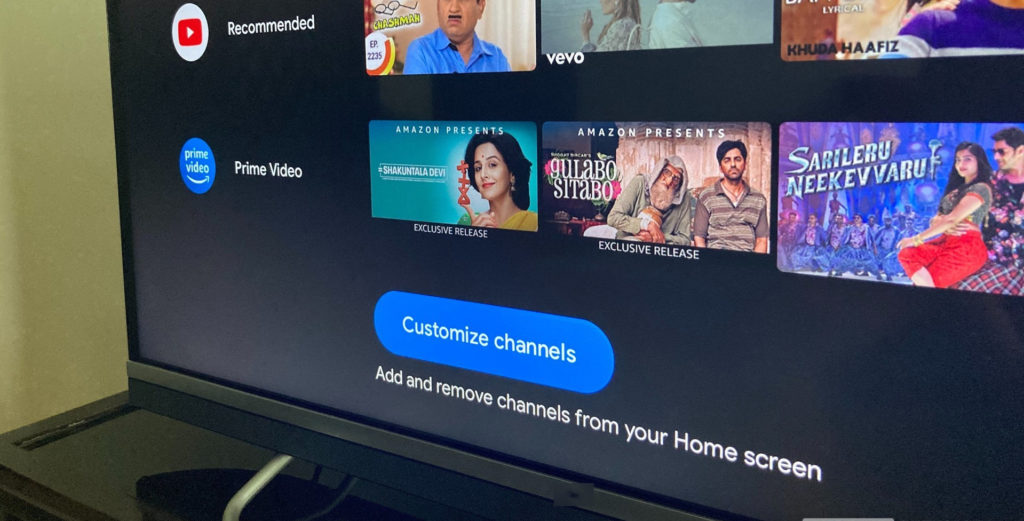 Okay, maybe not small money after all. But really good value. Here’s the thing, our homes are getting increasingly smarter and more connected, just like many more areas of our lives. See, home internet is now more available than ever. Fiber to the home is a booming business in many suburbs, hence the push to take advantage of this.

Smart bulbs, smart appliances and so on are nice and all but perhaps the most notable smart ‘thing’ in the house is the TV, the center of entertainment in the home.

The TCL P725 is a pretty solid smart TV that punches well above it’s weight and in this post, I will be taking you through the review of this product after using it for the better part of the past 2 weeks.

The P725 is a rather good-looking TV. It comes with slim bezels all around with a small fabric-lined chin that houses the LED indicators along with the remote receiver.

The expansive 43-inch 4K panel no doubt catches attention, no matter how busy-looking your home setup is. The TV stands on two V-shaped stands that are screwed to the bottom with the provided fasteners, offering a rather stable stance.

The panel is slim enough for any modern TV but that shouldn’t be such an issue as these appliances tend to remain static against walls for most of their lives.

This TV is fairly modern and as such, comes with enough ports for almost all your connectivity needs. Perhaps the one that threw me off was the lack of the old school RCA cables for connecting decoders to the TV. They’re still there, only they’ve been compressed into a 3.5mm jack and there’s an adapter in the box.

The other I/O is fairly standard and includes:

There is also a switch for the microphone located next to the power button. This physical switch ensures the TV isn’t actively listening to you or listening out for the Google Assistant trigger phrase. This is a nifty little addition for the privacy-conscious user in this surveillance and data collection era.

The remote control is an overlooked piece of tech despite it being the primary mode of interaction between you and your TV. In fact, the remote sees a lot of use and often ages way before your TV.

The TCL’s remote is slender and taller than most but still feels good in the hand. It offers all the important functions you would need including a prominent navigation set, a numberpad and two dedicated buttoms for YouTube and Netflix.

Of course, u can get the Button Remapper app and that allows you to assign even more functions to these keys with long presses and double presses, and so on.

Connectivity-wise, the TCL P725 does support both 2.4GHz and 5GHz WiFi. Since the TV and the router were in the same room, I found it easier to connect it to the 5GHz band and letting all other devices compete for the 2.4GHz band. The connection was solid and rarely dropped out unless I was having internet outages at ISP level.

The TV also supports Bluetooth 5.0 and this allows one to connect peripherals like supported home theatres, Bluetooth speakers, or even earbuds for those quiet late-night binges so you don’t disturb others in the house.

4K in all it’s glory

Now I have to admit, other than electronic stores and company demo events, I haven’t had a 4K display in my space and this was an awesome experience to have. The 43-inch TV at 4K resolution with HDR and Dolby Vision means that you get crisp images on supported platforms and content.

Watching HDR10 content on Netflix in a dimly lit room at full resolution was blissful with clear details that weren’t blinding. Of course, if you pixel-peep, you can still make out individual pixels but at normal viewing distances, this display is delightful.

My colleagues tell me that quantum dot displays from LG and Samsung offer an even richer experience but those TV cost double the price of this unit so I have absolutely no complaints.

I wasn’t really expecting thumping bass from this TV especially seeing the slim thickness of the product. Of course, you shouldn’t expect earth-shaking sound for TV speakers, that’s why Soundbars are a hot product category today.

The P725 comes with 2-units channels rated at 24 watts. It also supports Dolby Atmos, Dolby Audio and DTS HD. That’s all good but how does it actually sound? Well, underwhelming to be honest. For the occasional Spotify session and watching TV, it does the job and does that well.

If you’re expecting an immersive experience while watching a movie, these will fall short of your expectations. At low volumes, the speakers aren’t very audible. Mid volumes are okay but that quickly falls apart at high volume with a lot of distortion.

Android TV is arguably the best Smart TV experience out here today. This unit comes with the latest version, Android TV 11. The home screen is pretty similar to other Android TV products from Xiaomi like the Mi Box S. This means it is pretty easy to use and the learning curve is pretty smooth.

It comes with a few TCL apps preinstalled but these can be uninstalled from Settings or hidden from the launcher. Speaking of launchers, I enjoyed using the Google TV launcher on this TV although it did lag from time to time while I had a bunch of apps running in the background.

Google Assistant learns new tricks every day and is pretty useful today. The TCL P725 supports Google Assistant’s Hotword ‘Ok Google!’ and ‘Hey Google!’ and the pick-up is crazy good. Even from across the room and with audio playing at a relatively high volume, the P725 was able to pick my voice and pause whatever was playing to listen to my commands.

Of course, the Assistant might miss your commands once or twice but in my experience, it wasn’t too far from the missed command I got when using Assistant on my phone or earbuds.

I am not sure why you would want to use Google Duo on your TV but I can think of a few instances where this might be useful. Plug in an external webcam via any of the available USB ports and your TV is able to make video calls with ease.

Google Duo is Google’s version of Skype and comes preinstalled on many modern Android phones while also being available on the Play Store and Apple App Store. Install this app on your TCL P725 from the Play Store and it links to your associated Google Account.

I was able to make calls easily and the audio reception on the other end of the call was surprisingly good. Clearly, TCL did some good work with this TVs microphones.

Should this not be available in your region, TCL has a bunch of similarly spec’d TVs at roughly the same price range and we dug up a few such offers.

These are pretty fair prices when looking at the specifications you’re getting for your money compared to other offers from brands like Samsung, Sony, and LG. You might also want to check out the TCL C8 that we reviewed not too long ago.