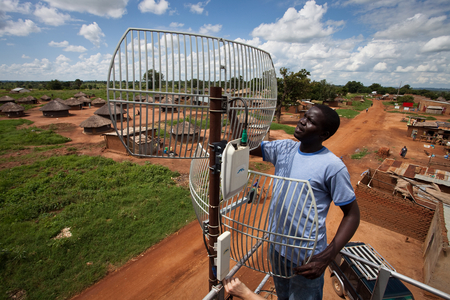 So you woke up this morning, turned on the lights in all the rooms you move through in preparation to start your day. If you took a warm shower, you either have a water heater or means to heat up your bath water fast, maybe you had to straighten that shirt/blouse. Either way somehow somewhere you used electricity this morning and hope to do so again this evening when you get home.

The grid is basically a collection of thousands of miles of copper or Aluminium cables, power generators, transformers, substations, switch gears and the like connected systematically to transfer power from where it is generated to where it is consumed. So extending the grid usually involves expensive equipment and line losses each of which the power company should be able to get back should they choose to extend the grid. Not to mention huge losses due to theft  both by dubious consumers and by thieves cutting power cables for other uses.

As such rural areas have been marginalized for years with the grid connecting only major towns and covering a very small radius around the town. For instance Kumi Uganda where my mom lives has power to a radius of only 6 Km and that’s because there is a Leprosy center (Kumi Hospital) 6 Km away from town and of course the  connection is solely meant for the hospital. It goes without saying that politicians have taken advantage of this quest for or rather remote dream of grid power by making empty promises to the local dwellers in exchange for votes.

Ministry of Energy and Mineral Development(MEMD) created  Rural Electrification Agency(REA) to help the government achieve an electrification rate of 22% by 2022 from 1% in 2012. More recently the Government of Uganda received funds from the world bank, the federal republic of Germany and the European Commision for Grant Financing to electrify poor households. According to an inception report by M&E Associates Ltd on “Consultancy Services to Enhance Connections to Poor Households in Selected Rural Electrification Projects”, this project is aimed at connecting 130,000 households. A criteria is used to select the eligible households in different parts of the country. “Households spending at least shs.12,000 monthly on kerosene, candles and dry cells will be considered able to afford the electricity”, Dr.Namuli Rachel PhD, the contract manager on the project noted.

Projects like this put a smile on my face knowing that little by little access to electricity is increasing in hope for better standards of living, something the government has in mind. However this is limited to areas with access to the national grid which still leaves us with the problem of access to this grid and the monopoly of power distribution companies.

This calls for other means of power distribution and generation that can reach areas the grid will take decades to. The answer is in microgrids. Microgrids borrow an  idea of backup or independent power systems like that inverter battery or solar system you, your friend or someone you know owns. It is a small scale power system that can supply a localized community. Basically, the grid on small scale. It may operate connected to the main grid or independently.

Operating independently requires it to have its own source of electricity which can be Solar, wind, pico hydro, biogas, diesel among others.

For instance by implementing a small pico-hydro project that serves a small community of say 50 households within a radius of say 2 Km, makes a big difference. The households then agree on contributing an amount of money for the  maintenance of the project. We’ve streams and small rivers in North Western,South Western and Eastern regions of Uganda that make pico-hydro projects viable like Anyau in Arua, Tokwe in Bundibugyo and Ririma in Kapchorwa among others. Gwere-Luzira village in Moyo is a beneficiary of these pico-hydro projects built on river Amua with 500W capacity.  MEMD and German Technical Cooperation (GTZ) implemented this.

Solar being a readily available resource not limited by location and availability of the river is another  option with high potential. Uganda and most of Africa being Agricultural economies, Biogas too is viable and in fact is being used as a source of lighting and cooking in some parts of Uganda.

This microgrid idea has already been embraced by different companies,governments and individuals in different parts of Africa and Uganda. PowerGen Renewable Energy has installed microgrids in Kenya and Zambia with renewable technologies and diesel engines to help with intermittence issues. Village Energy  have a product called centralized microgrid  that enables landlords in slums to provide electricity for lighting and phone charging via solar battery systems to their tenants. Joint Energy and Environment Project  installed a microgrid for 102 households in Kasese with Solar. All these systems are for areas that are offgrid. Financing or payment for the service/technology varies with the company and size of installation.

In summary, microgrids are a tried and proven way to increase access to electricity to rural off grid communities. They cost less to  install and maintain than extending the grid which makes them affordable for poor yet paying communities. We need more people and governments investing in this to increase the standard of living in Uganda.  As mentioned before, microgrids can also be done for communities already connected to the grid and want to strike a balance on cost of electricity or have back up ( be self sufficient) in case of failure of the main grid. In Africa though, this is still a luxury.

Let us know what other ways you think access to electricity can be increased in Uganda or Africa at large.

6 thoughts on “Microgrids: The answer to accelerate the extension of power to off-grid areas”