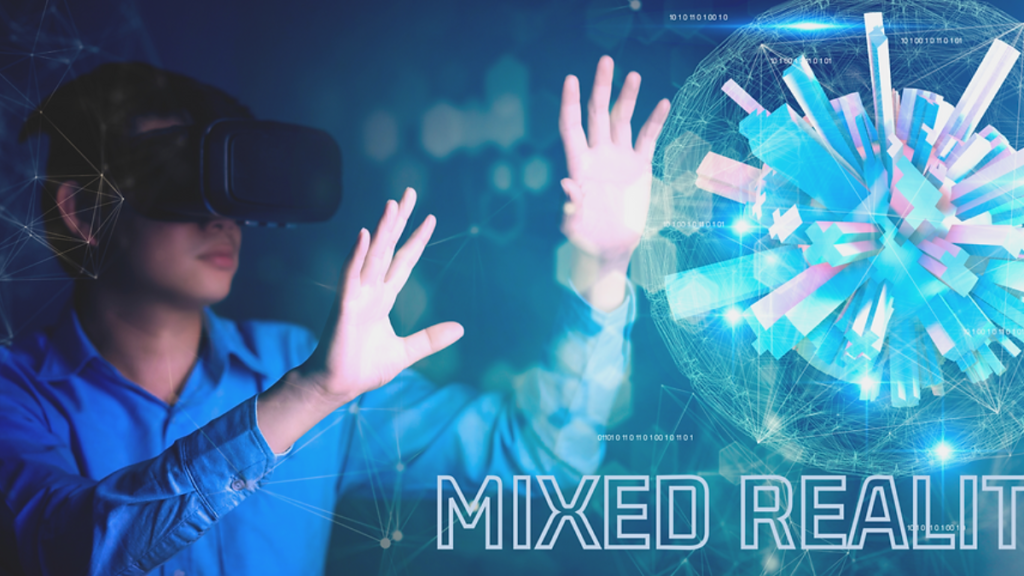 With the advancement of new technologies, we have seen many terms and jargon that have risen to popularity lie Augment Reality(AR), Virtual Reality(VR), and Mixed Reality(MR). Virtual Reality (VR) was one of the first introductions to many of us with the rise of VR headsets and gears. Today, we are going to grasp the difference between all these terms and understand more about what is Mixed Reality (MR).

Augmented reality (AR) is the real-time use of information in the form of text, graphics, audio, and other virtual enhancements integrated with real-world objects. It is this “real world” element that differentiates AR from virtual reality. Now, what is MR?

What is Mixed Reality (MR)?

Of all the various facets of Extended Reality available today, Mixed Reality is often the one met with the most confusion because people are already confused with AR. For years, people interested in the future of digital technology have seen “MR” as a kind of extension of augmented reality.

Mixed Reality is a blend of physical and digital worlds that unlock new natural and intuitive 3D human, improved computer, and environmental interactions. This new reality is based on advancements in computer vision, input systems, graphical processing, display technologies, and cloud computing.

Mixed reality does not exclusively take place in either the physical world or virtual world, but is a hybrid of augmented reality and virtual reality. We shall see the main difference down.

Today, there are many practical examples and applications of mixed reality, including design, entertainment, military training, and remote working.

For example, in healthcare, Smartglasses can be incorporated into the operating room to aid in surgical procedures; possibly displaying patient data conveniently while overlaying precise visual guides for the surgeon.

It has also been hypothesized that a hybrid of mixed and virtual reality could pave the way for human consciousness to be transferred into a digital form entirely—a concept known as Virternity, which would leverage blockchain to create its main platform.

As technology advances, innovators will discover new ways to combine the virtual and physical worlds, and the potential of mixed reality will grow respectively. There are also immersive device tools being built to enable holographic content management. These tools are rapidly gaining more attention, especially in the entertainment sector.

There are many use cases that many related tech companies are exploring besides that I haven’t mentioned here.

MR compared to AR vs VR

Augmented Reality(AR) takes place in the physical world, with information or objects added virtually like an overlay; Virtual Reality(VR) immerses you in a fully virtual world without the intervention of the physical world.

Now, Mixed Reality blends the two above (AR and VR) and you can be in both worlds at the same time. Mixed reality is also sometimes also referred to as Hybrid Reality or eXtended Reality (XR).

Blended Reality (MR/XR) permits you to see and submerge yourself in your general surroundings even as you cooperate with a virtual climate utilizing your own hands — all while never eliminating your headset. It gives the capacity to have one foot (or hand) in reality, and the other in a fanciful spot, separating fundamental ideas from genuine and nonexistent, offering an encounter that can significantly impact the manner in which you game and work today.

How does MR work?

Mixed Reality utilizes a progression of cameras, sensors, and frequently AI-improved innovation to handle information about space and utilize that data to make carefully upgraded encounters.

When, for example, a client puts on a bunch of blended reality glasses, the cameras and sensors in those glasses interface with a product program that gathers however much data about the climate as could be expected, basically making a virtual guide of this present reality.

As Microsoft suggests, Mixed reality is the next wave in computing followed by mainframes, PCs, and smartphones. Mixed reality is going mainstream for consumers and businesses because it will be a whole new blend of AR and VR.

Mixed Reality blends both physical and digital worlds. These two realities mark the polar ends of a spectrum known as the virtuality continuum. I also do believe that MR will be one of the building blocks of the creation of the new internet, metaverse, etc.