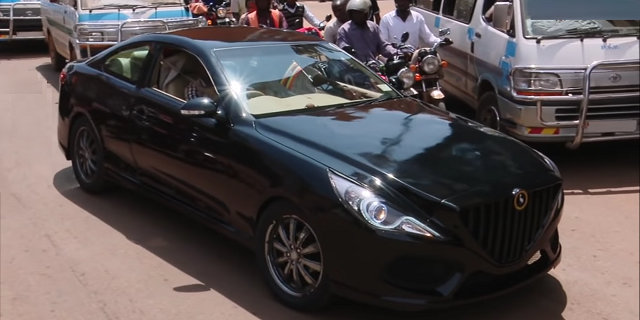 Where are the cars? When are the electric cars coming? These were some of the questions that flocked social media platforms as 2018 closed. Kiira Motors Corporation had predicted to begin mass production of its prototype vehicles before the end of 2018. However, after the recent test drive of the new Kiira EVS, it is clear that Ugandans have a lot of waiting to do before mass production of the first Ugandan made car.

The first public test drive of the new Kiira EVS started from Game parking on Jinja road. Many curious Ugandans and journalists flooded the place to witness Uganda’s much touted vehicle. The test driver was journalist Andrew Mwenda with musician Bebe Cool the co-driver. The test route started from Game supermarket to Kiira through Kamwokya, Wandegeya, Bombo Road, Kampala Road, the City Center to Jinja Road and back to Game Supermarket.

The Test Drive of the Kiira EVS

The first few kilometers of the journey seemed like pure bliss. Escorted by chanting boda boda riders, the Kiira EVS went ahead without a hitch. Each stop brought on many onlookers and admirers of the invention to take selfies.

However, with a few kilometers left to end the test drive, the beloved Kiira EVS started spewing what looked like steam. The test drive was halted because the mechanical problems witrh the Kiira EVS persisted.

Officials from Kiira Motors Corporation said that the Kiira EVS still requires some tweaking and refinement before it is ready for mass production.

We are still doing checks, but normally a vehicle has a number of fluids in it. And sometimes when those fluids get to interact with a hot surface, that’s when the steam comes out. And this vehicle was actually running on A.C. and that contributes because you have water condensing in there. However, we are still collecting data.

The test drive revealed many flaws in Uganda’s celebrated electric vehicle. The hind tires kept touching the body. Consequently, it became practically impossible for the Kiira EVS to carry four people as per its carrying capacity.

We are modifying the arc of the vehicle to ensure that it can accommodate four people and also put bigger tires as well the suspension.

I have to restrain myself because when I press the accelerator, it (Kiira EVS) just wants to fly. They need to do a lot to improve the steering and shock absorbing systems.

Kiira Motors Corporation might have to go back to the drawing board to fix these errors before the Kiira EVS goes into mass production. It’s not clear what percentage of the parts are Ugandan made. However, what’s clear is that you will not be buying a Kiira EVS soon, at least not this year.