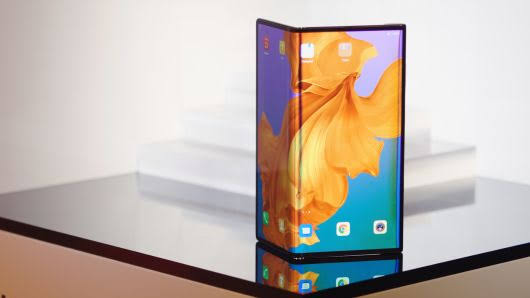 Just a few days after the launch of the Samsung Galaxy Fold, Huawei presents its own foldable smartphone adopting another approach entirely. Instead of folding in on itself like a book the way Samsung’s folding phone does, the Huawei Mate X is folded onto its back The new smartphone which goes on sale sometime around the middle of the year and comes 5G ready.

Entering into the foldable smartphone club, the new Huawei Mate X becomes a tablet in full fledge mode offering much more space than the Samsung competition. With a magnanimous 8-inch screen when unfolded and 6.6-inch display upon wrapping the screen around the back. Thinking about it, the approach by Huawei seems to be more idealistic in terms of ease and usability. Anyway, the foldable space is still seen as the next best thing in the world of smartphones considering there is only a handful of them around.

Also read: Samsung’s foldable smartphone is closer than ever- Teaser

The schematics of the phone is complex to say the least and details have not been particularly divulged yet. According to Huawei, they patented 100 component making up just the hinge of the smartphone. Around the back, at the left side is the spine which serves as the handle in tablet mode. It also houses the cameras, side fingerprint scanner doubling as the power button, speaker and USB Type-C port at the bottom. The Huawei Mate X is much thinner than the Samsung Galaxy Fold at 5.4mm when unfolded and 11mm when folded. Also, the screen folds effortlessly around the back of the phone using what Huawei refers to as the Falcon Wing design. The hinge mechanism makes the screen totally flush with no noticeable bump.

Ideally, it is hard hot to think of the screen on the back incurring scratches here and there and with the foldable nature your Corning Gorilla Glass and other screen protection can’t work here. However, Huawei is going to be offering a customised case for the smartphone. Unlike the foldable Samsung model with thick bezels in smartphone mode, this smartphone has tiny bezels around the display when folded or unfolded.

Featuring an OLED screen which is undeniably the best at the moment, the Huawei Mate X possess three display configuration. At the front of the smartphone when folded is a 6.6-inch screen with a 2480 x 1148 pixels resolution. Peradventure you want to take a selfie, you’ve got a 6.38-inch display having a resolution of 2480 x 892 pixels serving as a viewfinder. Unfolding the screen, the Huawei Mate X blossoms into a tablet with an 8.0-inch, 2,480 x 2,200 pixels resolution OLED screen. The smartphone changes the display as you fold or unfold the screen and adjust the contents on display accordingly.

See: Here’s a list Foldable phones in 2019 and beyond

Details of the camera are sketchy as at the time of writing but there are 4 cameras on this smartphone and the fourth one said to be released with the Huawei P30 is likely to be a TOF (time of flight) camera. The TOF camera is a much-featured addition recent flagships. The other cameras are suspected to be a main 40MP sensor, a 16MP ultra-wide camera and an 8MP telephoto lens. Sourced from Leica, the cameras would perform quite well looking at the track record. No designated selfie camera on the smartphone, the cameras on the back will be in charge of that, while you use the rear display a mirror screen. Another cool thing is that, the person you are capturing can have a live view from the rear screen that is if it is folded.

Huawei has got you covered in terms of sustainability with the amount of battery power it carries. The smartphone arrives with a suitable 4, 500mAh battery which is only worthy looking at the screen size on the smartphone. Aside from that, Huawei put a USB Type-C 3.1 as port for charging the smartphone with a charger that supplies 55W of power. Yes, 55W SuperCharge as it is called by Huawei and it charges the smartphone to 85% in just 30 minutes.

The Huawei Mate X features a chipset from its own manufacturing company, Huawei’s HiSilicon Kirin 980 processor. The 7nm chipset is infused with AI capability and is the latest of the flagship chipset from Huawei. For robust performance, you’ve got 8GB RAM and enough 512GB internal storage space. The second SIM slot can also be substituted with a nano memory card for more storage. A Balong 5000 5G modem is also present which is said to offer 10 times the speed of a 4G network. Using the 5G speed, you can download a 1GB file in just 3 seconds. Android as a platform for ‘Foldables’ like the Huawei Mate X, However, Huawei still has its own EMUI skin here and the extent the Android ‘screen continuity‘ is utilized is not clear yet.

If there is anything foldable smartphones so far have shown, it is that they are highly priced. For a new tech such as this one, you would have to pay a lot and even more for the Huawei Mate X that cost a whopping $2, 600 or €2, 300. However, you won’t be getting this smartphone until June considering somethings still need to be perfected before it goes on sale.