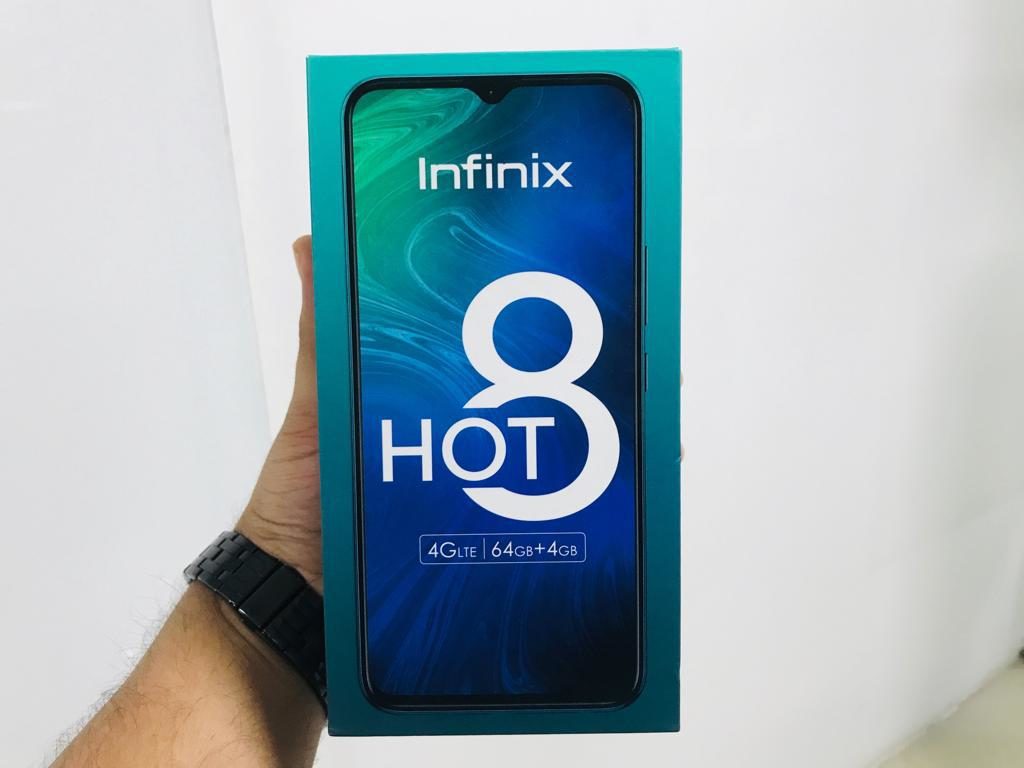 The Infinix Hot 8 is the latest phone under the Hot Series. It comes at an affordable price with notable features such as a triple-camera set up and a large battery. We unboxed the device a while ago and gave our first impression of the device. Now I’ve spent over 2 weeks using the phone and here is my Infinix Hot 8 Review.

The Infinix Hot 8 has a waterdrop notch at the front with the earpiece located above the notch. It also has an LED flashlight that only lights up when it is charging and doesn’t function as a notification light.

At the back, it has a gradient look that gradually fades downwards. It comes in the Quetzal Cyan, Cosmic Purple, Shark Grey, and Midnight Black color variants.

The power and volume rocker keys are positioned within easy reach on the right while the sim and micro SD tray are located on the left. The speaker microphone, Micro USD port, and 3.5mm headphone jack are located at the bottom of the phone. The phone weighs 165g which isn’t too heavy. It has a 6.52-inch screen with aspect ratio 20:9 display which makes one-handed usage a bit difficult.

The phone runs the XOS 5.0 skin based on Android Pie. The phone also comes with quite a number of bloatware pre-installed like palm store, fruit folic, asphalt Nitro, scooper, among others. It comes with the Gboard keyboard as its default keyboard.

The phone also has useful features like Whatsapp Mode, which restricts mobile data access to other apps save for WhatsApp. It also has the read mode which moderates the light from the screen to make reading easier.

Infinix Hot 8 compensates for its large display by having the one hand mode which makes the display slightly smaller making it easier to use one hand. It also has bike mode which rejects incoming calls and other distractions while you are driving or riding. It also has the game mode which optimizes the system to improve game performance.

The phone comes with an inbuilt screen recorder, app freezer, multi-window mode, battery saver, data saver and do not disturb features. The device also has a smart panel that can be customized to contain shortcuts of frequently used apps and tools.

Infinix Hot 8 has a MediaTek helio P22 processor which is a good performer for basic tasks like web browsing, calls, basic games among others. The performance becomes a bit laggy when you are running about 15 apps in the background at once.

Multi-tasking improved by far after I updated the phone to the October Security Patch. If your need for a phone is for day to day tasks, this device will serve you very well. If you need it for more sophisticated tasks like playing heavy games, you will get a below-average performance.

On AnTuTu benchmarks, the phone had a tally of 81435. It also scored 891 in Geekbench 5’s multi-core test and 148 in the single-core test. These are pretty decent results for a budget phone.

I and my photogenic friends took shots with the Infinix Hot 8 camera to be able to judge the quality produced by them. The camera app has basic camera modes and controls like AI Cam, Beauty, Video, Bokeh, and AR which are controlled above the shutter button. The HDR, Flash, scene and aspect ratio are controlled at the top of the camera screen.

Images captured during daylight were decent as the photos looked vibrant mainly when using the 13MP main camera. The dynamic range was also pretty good. For close up shots, the Infinix hot 8 produced pictures which according to me were by far its best shots. The images had a good level of detail and sharp edges.

Bokeh shots in daylight were pretty decent with some small issues with edge detection. The bokeh mode has a slider that allows you to adjust the blur intensity of the shots. Also, it is possible to adjust blur intensity and play with the point of focus in the default gallery app.

For photos taken during low light, the output was not great as they appeared to have muted colors and very little sharpness.

The front camera, also known as the selfie camera is an 8MP camera. It captured average photos that neglected details like texture, most especially in low light. In daylight/bright light, the images looked vibrant although it had too much skin smoothening for my liking.

As for the video, the Infinix Hot 8 records videos in 1080p but has focusing issues and lack of stabilization.

The battery is a very big plus to this device. A 5000mAh battery can take you for more than 24 hours on regular usage – social media, web browsing, calls, light games, among others. I tried to charge it using its own charger and an unbranded charger. As expected, it was faster when I used its own charger to charge.

I also used the phone for calls and texts mainly and it took me 7 days to get it to 20%. Insane, right?

On a scale of 1-10, I would give the Infinix Hot 8 a 7/10 ranking. The phone’s performance can be described as decent, the battery is excellent and the camera is fine. Given other features and modes the phone comes with, the experience just got better. Definitely a very good phone for its price range.