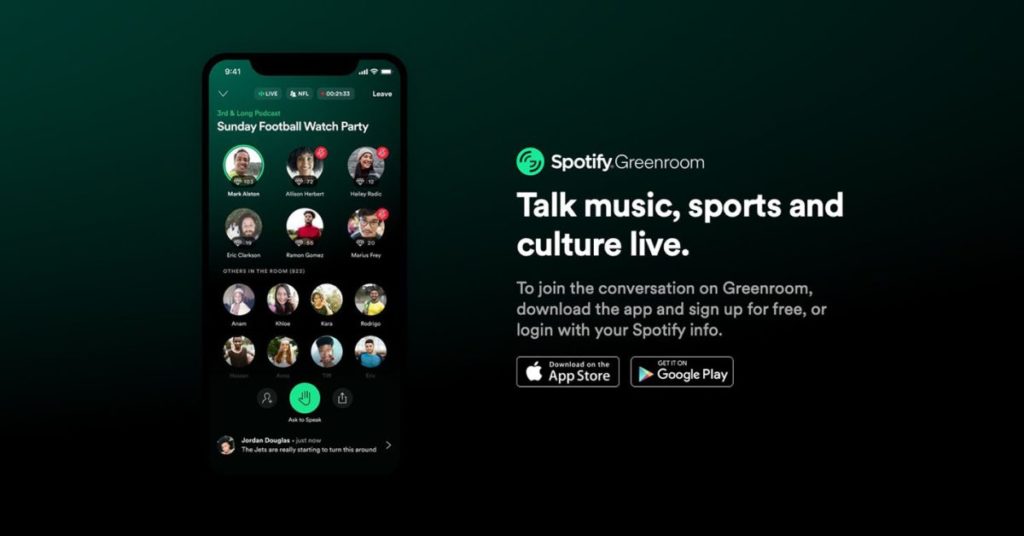 Back in March of this year, Spotify announced that it was in the process of acquiring Betty Labs, the company behind the sports-focused audio app, Locker Room. Apparently, Spotify had plans to enter the live audio market and this acquisition was a strategic one because it was going to help speed its entry into the market. A market that already has the likes of Clubhouse, Spaces by Twitter, Live Audio Room by Facebook, and other platforms like Slack, LinkedIn, and Reddit currently building similar products.

Just three months after announcing the acquisition of Locker Room, the music streaming company is launching what it calls ‘Spotify Greenroom‘. Spotify Greenroom is a live audio chat platform – similar to Clubhouse – that allows users worldwide to join or host live audio chat rooms. And takes it one step further with the option to turn their Greenroom conversations into podcasts.

According to information on Techcrunch, the Spotify Greenroom app is based on Locker Room’s existing code, and the current users of Locker Room will see their app update to become the rebranded and redesigned Greenroom experience (a switch from Lockroom’s white and reddish-orange color scheme to the new Greenroom app’s green and black design)

Spotify says its current users on Spotify can sign into Greenroom with their current Spotify account information. The app is available to both IOS and Android device users. It will also now available in 135 markets around the world. That’s a small number when compared to the global presence of its parent company, Spotify – present in 178 markets around the world. But surely, there are plans on expanding into more markets in the future.

Also, at the moment, Spotify Greenroom is only available in the English language.