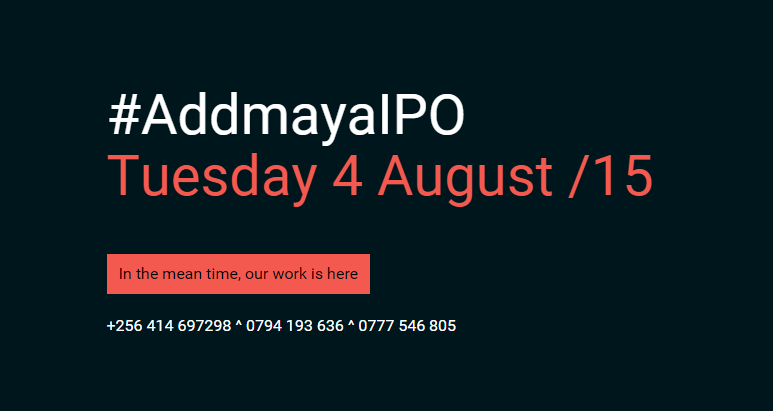 “The most logical step after 6 years of steady growth and expansion” — #AddmayaIPO, touts on their social media campaign that was launched in quietude on 29th July, just a day ago.

According to Investopedia, an initial public offering (IPO) is the first sale of stock by a company. Small companies looking to further the growth of their company often use an IPO as a way to generate the capital needed to expand. There are several pros and cons for IPO, although that’s a topic for another day.

Addmaya is a Ugandan Film, TV and Design firm specializing in Brand Identity, Promos, Commercials, Documentaries and Graphics Design across different media platforms. They have over the years built a strong portfolio of satisfied clients while pushing the boundaries in marketing communications and design.

Arthur Nakkaka, the Art Director at Addmaya confirmed to Dignited that it’s true they’re going IPO on Tuesday 4th August 2015. But declined to give further details only mentioning that the prospectus, come the offering’s day, will give details about everything. 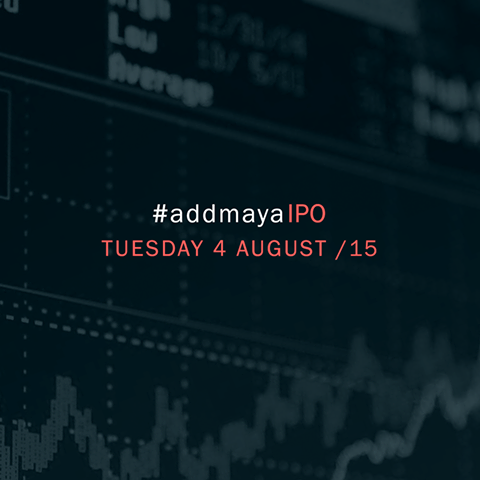 Yes, this can be translated as doing things they have never done before. It’s most probable that they will launch in the Growth Enterprise Market Segment (GEMS) since it is the most relaxed segment with lesser stringent financial conditions that the fledgling Animation and Design studio would certainly fulfill at this point in time.

Undeniably, Addmaya is the first fully privately-owned Ugandan startup (company) to head to the celebrity IPO territory. Where as the information about the IPO is still scanty at the moment, the company’s pre-IPO valuation remains unknown, although one that is in the region of UGX 400 million makes sense to independent valuers.

From the look of things, the IPO details are being kept top secret as the public keeps on guessing, perhaps this is a calculated move to boost the buzz of the IPO since it’s more or less in 72 hours, besides it was announced on such short notice.

According to speculation in our newsroom, they will go with the symbol $MAYA on the Exchange that is populated by 16 decades old public corporations and nationalized companies. The symbol MAYA, is a moniker of the 10 employees of the startup who love to identify themselves with; the esoteric Mayans. Arguably the most creative and brilliant generation of people who lived in the Americas before 900 AD.

They have an incredibly amazing story, you should read it.

Edit: An earlier version of the article speculated that the IPO will have East African Underwriters Ltd as the lead underwriter. Alpha Capital, Crested Capital or African Alliance as the transaction partners.

Speculation at this time is improper and detrimental to the market.

IMPORTANT UPDATE: Addmaya is NOT doing an IPO as we had earlier thought. Instead the film and design company has announced a new website and reel that are modern and refined to capture the company’s achievements in Film, TV and Design. Teased as the #addmayaIPO, the Improved Portfolio Online is an expression of what they stand for and showcases the breadth of the work they’ve done since inception. More details are listed in this post.

2 thoughts on “[update]AddmayaIPO: Uganda’s first startup to go IPO in less than 72 hours”