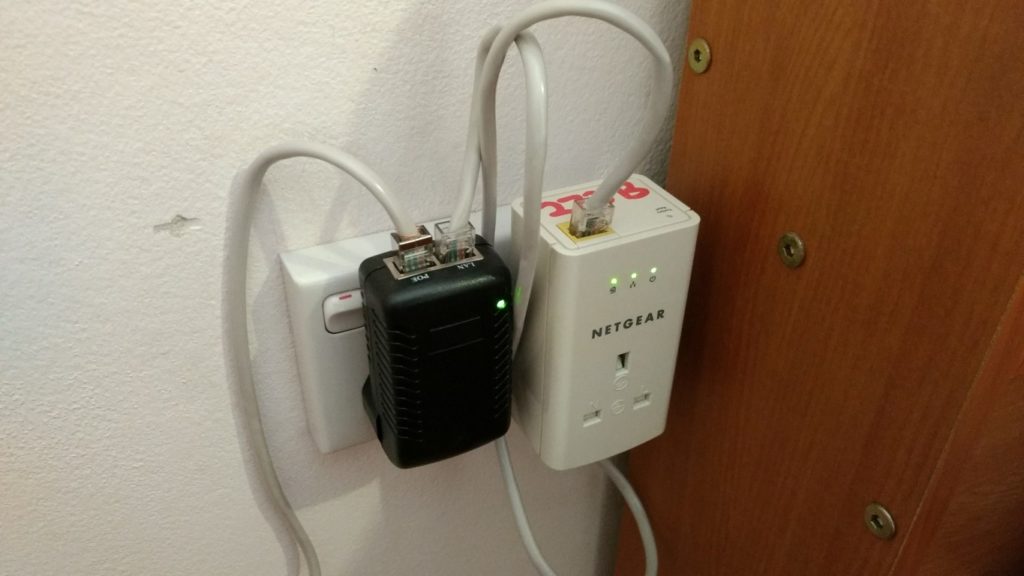 Ethernet over Powerlines (EoP), also called Powerline Networking and Power Over Ethernet (PoE) are two quite confusing technologies. Even though they sound quite similar, each does the opposite of what the other does. In this post, we will be clarifying how each of them works as well as how they differ. Let’s get right into it and start with Power Over Ethernet (PoE).

Simply put, Power Over Ethernet is a technology that allows low-voltage currents to be transmitted via an ethernet cable. This makes use of unused wires within an ethernet cable. It transmits low currents enough to power an access point or an IP camera. But not enough to power something like a laptop. PoE currents are also sufficient to trickle charge a phone but not at normal charging speeds. A typical IP camera draws between 4.5w and 9w of power. All this depends on the fact that electrical signals and electrical currents are able to share the same cables without any issues.

PoE comes to the rescue when you have a peripheral device on your network that is located far away from any power outlets. PoE works by use of something known as a PoE Injector that is usually plugged into a wall. The connection is quite straightforward. The PoE injector receives a cable from your network switch or router and outputs another cable that is carrying power. The output cable carrying power is what you plug into your IP camera or Wifi repeater. This now means your IP camera is powered by your network switch.

Can You Power a Non-PoE Device using Power Over Ethernet (PoE)?

Now, the above application works if the device on the other end of the cable is PoE-compatible. If it is not PoE-compatible, you need another device called “tap or picker”. This is what will extract power current from the ethernet cable. The extracted current is then routed to the device’s power jack input. To protect equipment, some PoE systems use surge protection systems. These are systems that cut off power if a short circuit or excess current is detected.

This is significantly cheaper than running a power cable from the switch to the IP camera. It is also easier and safer. In domestic applications, one can get away with using cheap extension cords. However, when it comes to commercial applications, like offices and factories, your wiring needs to be up to the professional code of practice. This could mean very expensive power expansion projects. As long as the power needed can be safely carried by ethernet, PoE is your go-to technology. PoE is a formalized standard classified as IEEE 802.3af.

As earlier highlighted, Ethernet Over Powerlines (EoP) is not to be confused with Power over Ethernet (PoE). More commonly referred to as Powerline Networking, EoP is a technology that allows you to have wired network connection outlets at locations you already have a power outlet. Powerline Networking is also known as HomePlug. This technology is also based on the fact that electrical signals and currents can share the same cables without interfering with each other.

Now, in this case, you are using existing copper power cables to transmit network signals instead of using ethernet cables. For you to implement this system, you need to have two powerline adapters on either end of your system. Let’s say you want to transmit a network signal from the router in your sitting room to a network device in your upstairs study room. The first Powerline adapter will be in the sitting room close to the router and a power outlet.

How To Implement Powerline Networking

Using the above scenario, a cable will run from the router to the first adapter and into the power outlet. The second adapter will be in your upstairs study room and close to a power outlet. A cable will run from the power outlet to the adapter and then to the network device. Now your network device is connected to your router. The network information will be transmitted uninterrupted through your breaker box up to where it is needed. I should point out that this system will not work if your electrical system has two or more breaker boxes.

It will also not work if your circuit breakers have any sort of insulation between them. EoP is also another easy and cheap alternative for users who need a wired network connection where there basically exists none. Powerline devices have support for a 56-bit Data Encryption Standard (DES) for security. They also have a throughput rating of 14Mbps and do not need any drivers. These easy-to-install solutions can be gotten for below $100.

Power Over Ethernet (PoE) makes use of ethernet cable’s unused wire pairs to power low voltage network devices where there are no electrical power outlets near. On the other hand, Powerline Networking utilizes copper power cables that already exist to enable ethernet connectivity to places without an ethernet outlet port.